Premier Member
#1
Another opportunity to be in the room among Australia's greatest proponents of long-distance motorcycle riding was on offer, and I wanted to be there. But the
qualifying distance is 1610km and the Muster was in Dalby, just 220km from my house. A circuitous route was required and one up north, then west and south went
close but lacked the bit of margin we like to add for fear of falling short on a technicality. There were no useful extensions north or west, so I added a short run
south to Yatala. Initially a purchase at the BP for a certifying docket was the plan, then I thought it would be neat to grab an iconic Yatala Pie and have it for dinner on the road. That was all planned and submitted in January without a thought of the Commonwealth Games and the peak hour.

The Queensland Government protected us from our excesses by lowering the speed limit by 10kph on the motorway in deference to the teeming masses of vehicles
expected, but the onslaught didn't eventuate and so we all dawdled up and down the six and eight lanes for fear of offending. The pie safely on board and the corner docket even more securely stowed, I began the crawl north. The roadworks on the Gateway Arterial are notoriously congested, but the Honda lane was generally viable and I made fair time. I later read an SMS from my SPOT-watching wife commenting I'd been gone two hours and was still in Brisbane.

A quick refuel at the Maryborough exit for a docket to prove I'd taken the eastern route rather than the 18km shorter inland route and I was set for the ride up to Rockhampton. I'd lived there as a boy and still feel a connection which I was soon to poignantly remember.

After refuelling I moved the bike away from the bowser and spread the table for dinner. The meal plan had a certain cachet to it, but in practice, a well-travelled Chicken and Mushroom pie lacks the key adjective of a Hot Pie.

I usually do just fine with a handfull of salted roasted almonds, so anything more elaborate isn't needed. I was soon on the road as the allocated 20 minute dinner break expired. The westward leg soon arrived at this sign. 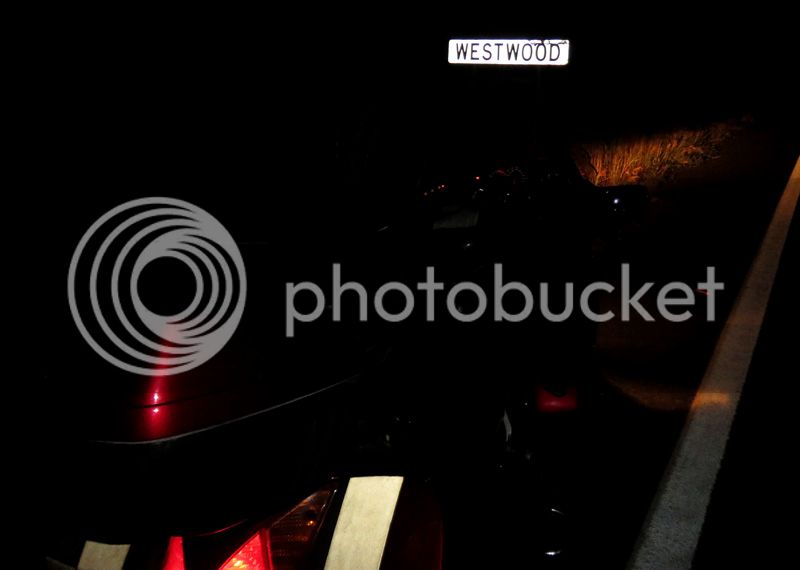 Suddenly a stream of memories surfaced. We lived in Rockhampton in the mid '50s because my father was the Union's Mines inspector and shortly after he was appointed he was struck down with Miner's Phthisis, a lung disease acquired by working in dusty conditions. It was incurable, and he was hospitalised at the Westwood Sanatorium which you can see here. I remember travelling with my mother on the rail motor to Westwood and walking up to the Sanatorium and sitting with my father on those verandahs. There weren't many of those journeys before he died, but not before he crafted me a sturdy school back pack from leather- his biggest project in his leatherwork pastime. So my SS1600 had an unexpected interlude inspired by a small wooden town sign.

My next corner was Emerald, thence the southern leg. By now I'd seen only one rabbit and three flitting barn owls. I was expecting to encounter roos but on this leg saw only three small carcasses and so felt comfortable maintaining the speed limit. The yawns set in and I pulled into a truck stop.

As soon as I stopped, the easterly zephyr brought the unmistakable whiff of cattle, immediately followed by the restless stamping of hooves when I shut down. A quick stretch and the urgency for a rest evaporated and I headed out for cleaner air. My mental nadir was, of course, due to the hour of the day, and my energy levels lifted again with the sky lightening.

I began fantasising about my ideal road breakfast. Say what you like about Maccas, I will stoutly defend their Bacon and Egg McMuffin and Cappucino consumed from a position near the steed.

Saturday is a good day to move things taking up the whole road, and a couple of these behemoths were granted right-of-way.

The goal was reached at the planned hour and I took the sign's message as a personal greeting, soon to be followed by the friendly buzz of the Check-in room.

The Muster lived up to everyone's expectations- a credit to the organisers who worked for months to plan and coordinate the many aspects. Others have shared my enthusiasm that IBA Australia is in a strong position. Long may it flourish.
Last edited: Apr 9, 2018

#2
thanks for posting up Bill,, don't mind the macca's breakfast either

Premier Member
#3
Good stuff biggles...4 wheels may get you there, but 2 wheels moves the soul!

Premier Member
#4
Enjoyed your read and pics Bill and that chicken and mushroom pie looked a treat.

I would liked to have said more than hi but always appear time poor at these Musters. Hopefully I'll have more time to catch up next time. Thanks again for posting.

Premier Member
#5
A great ride and very entertaining report Bill. Some sad memories associated with Westwood, but some fond thoughts of your Dad as well.
I'll put up my hand for a B&E muffin when travelling, thanks to the training provided by my wife. Any pillion distance ride usually comes with the specifications that we stop at the Big M for the combined conveniences on offer (parking, toilets, food, coffee).

It was nice to catch up at Dalby, however brief that may have been.

Premier Member
IBR Finisher
#6
Magic memories!
A great ride Report & photos Biggles. Good to see you & the Honda again - it’s been a while.

#8
Biggles - We didn't get to chat over the weekend, but I felt there every step of the ride report. Til we meet again in BFE (i.e like a few year ago in SE.Qld ) always a good catch up

#9
It was good to see you at Dalby Biggles, glad your ride worked out well.