Premier Member
#1
Since the inaugural muster in Parkes, I have done a lot of riding, but mostly on trips with my wife, who has her own bike, but isn't a distance rider, so while we might get away for a week or two at a time, we rarely average more than 400km per day, so I was really looking foward to getting out for a long day in the saddle alone.

In the few days leading up to the ride, the one benefit of not having a steady job was that I had a good preparation in the form of sleeping in. I went to bed at 8pm the night prior and although I woke up several times prior to my 4am alarm, I managed to get more than 7hrs sleep before I got out of bed at 03:48.
04:08 I was geared up, thermals and wet weather gear. I wasn't expecting rain, but it keeps the wind off, and it wasn't really cold enough in Melbourne at that time to warrant the thermals, but I've been through Ballarat and Ararat before, so I know to budget for a cool morning. The bike's tank is already full so at the local servo I buy a drink and get my 4:14am start docket.

As usual, I start the ride in high spirits, but probably from about the 15 minute mark of the first hour until the sun comes up I am somewhat daunted by the km which lie ahead, but by the time the sun starts to rise I am enjoying the ride and watching the km clock up.

07:32 318km I roll into the BP in Horsham for fuel. I had stopped around Ballan to adjust one of my driving lights but other than that it was a clear run with very little traffic on the Western Hwy.

08:35 It's starting to warm up and I stop at the Serviceton rest area on the Vic/SA border to remove some layers, the jacket liner and wet weather pants come off, as well as my thermals top and bottom.

10:52 650km I roll into Tailem Bend (we're on CST now). There is a slight delay at the corner of the Princes Hwy and the Dukes Hwy where a car turning right across the westbound traffic has been T-boned. The air ambulance is loading a patient and the traffic has been stopped, but I roll up just as they allow the traffic to proceed. 2km further on in Tailem Bend I bypass the first couple of petrol stations and go to the United, which has a Subway and a view.

I refuel and get a corner docket and a 6" sub I'm off again, headed northeast on the Karoonda Hwy. I'd never heard of this road until a couple of years ago when a body was found in a suitcase on the side of the road. I think these things are considered 'normal' in SA these days though. 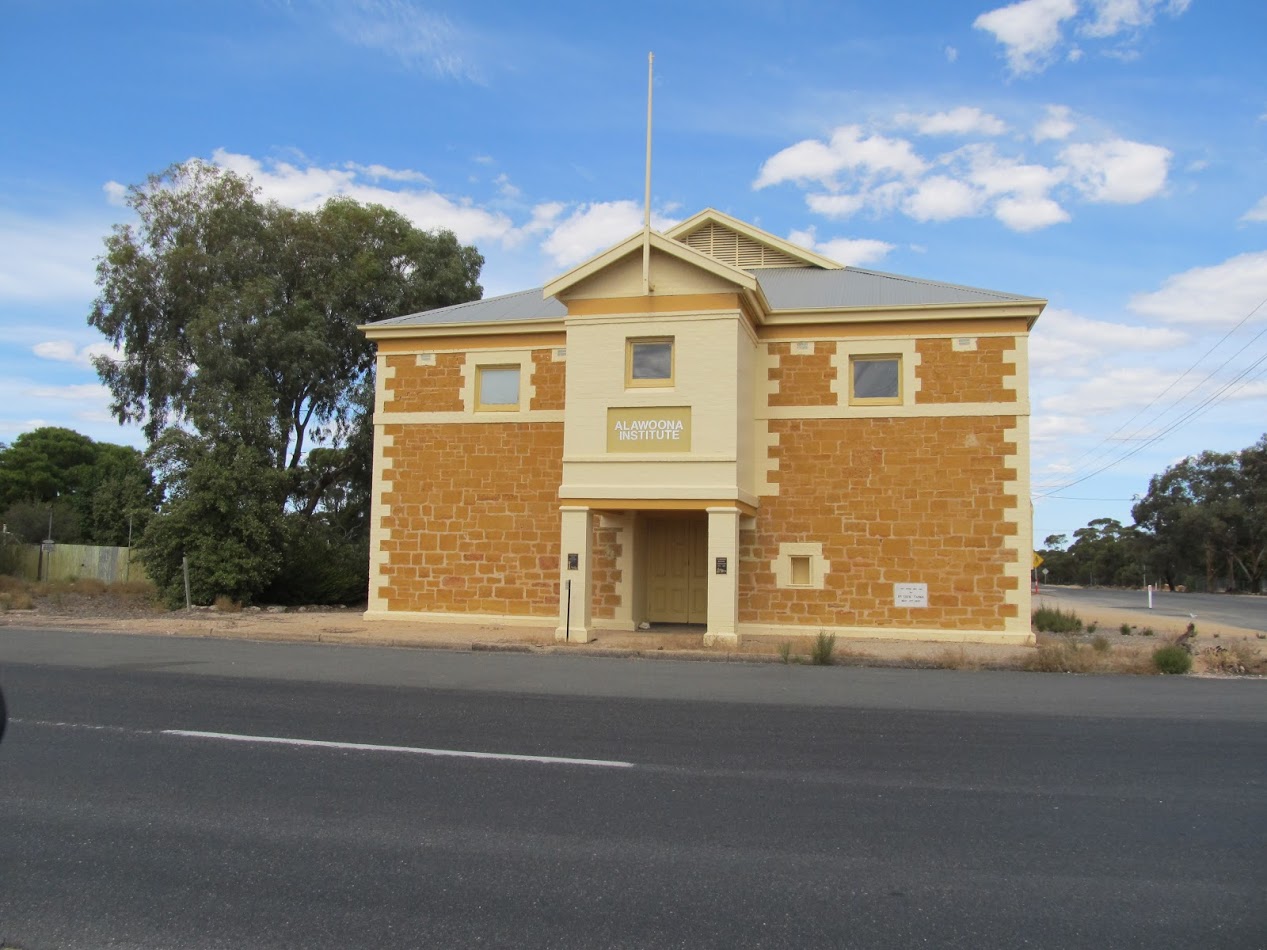 12:50 850km I arrive at the Renmark Hotel. It's opposite the river and is a lovely old art-deco building. Check-in is a breeze and I go up to my room to find where it is and use the amenities, (it becomes more apparent after a few hours without a toilet stop why they put the amen in amenities). Another drink for a corner docket receipt and i'm off again... 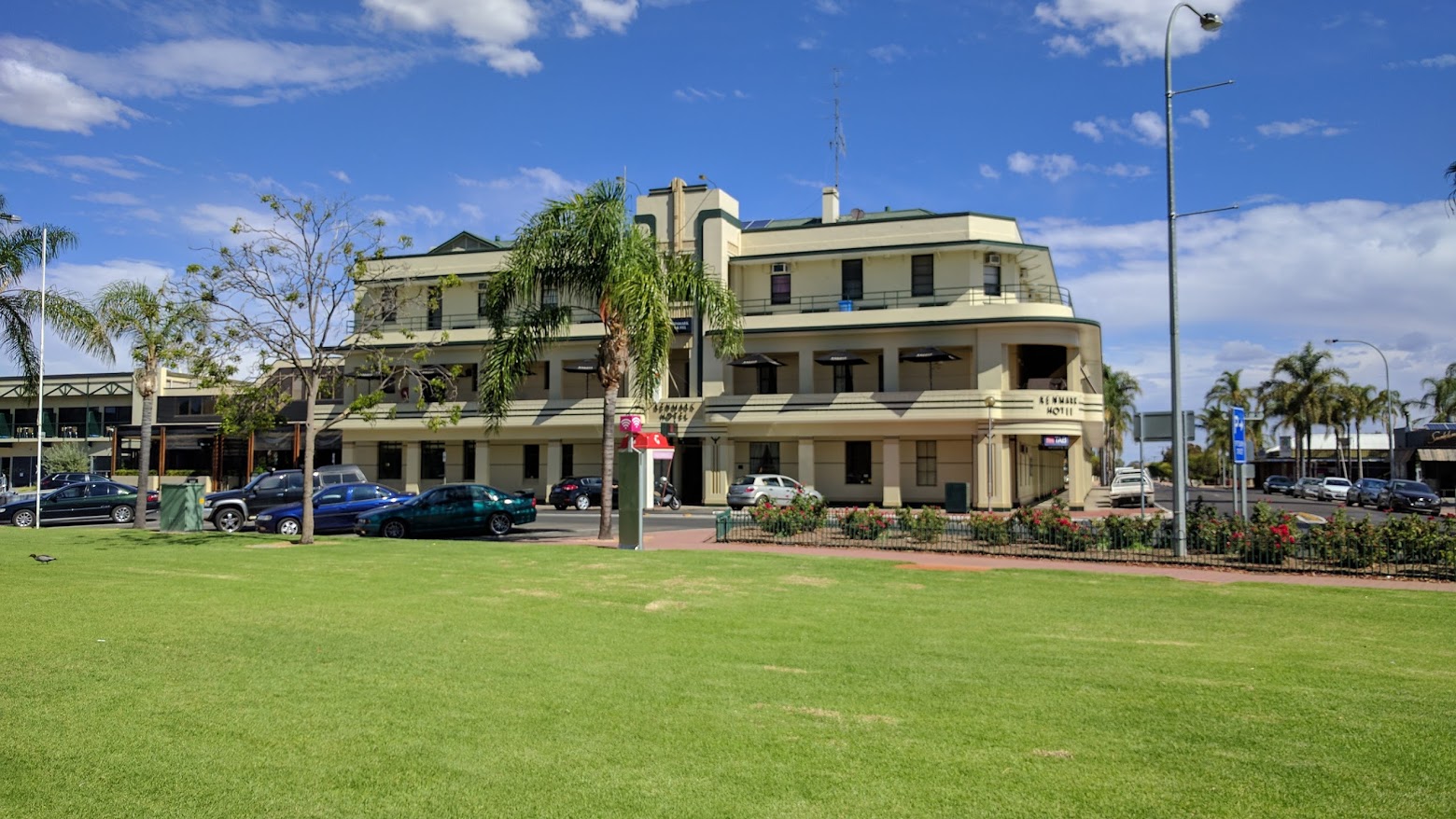 14:10. 962km After an hour or so along the Goyder Hwy more fuel is required at the Morgan Roadhouse, where the road turns northwards. There were a few large willy willies whipping up the topsoil along this section of road, and I slowed right down to let a couple cross the road ahead of me. One was as wide as the two lane road. 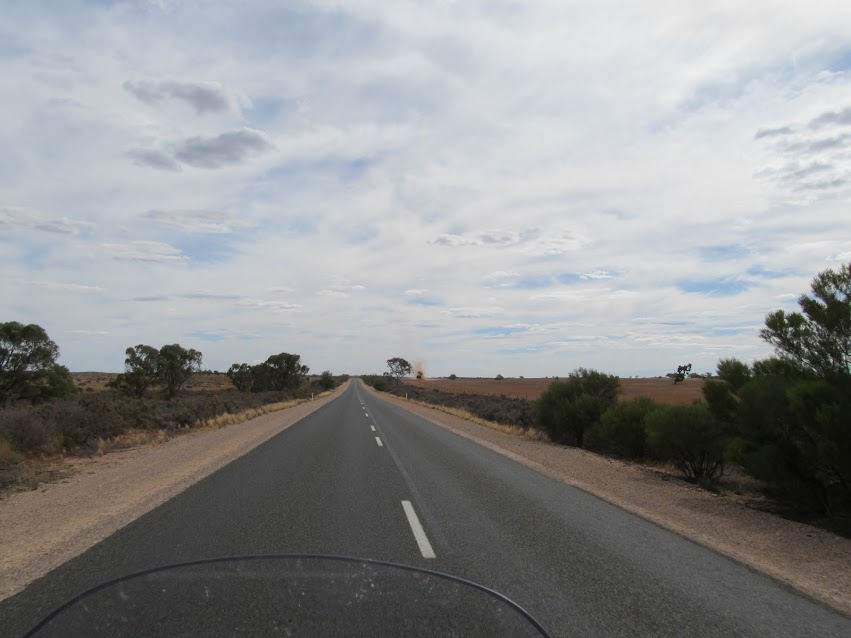 17:07 1244km I stop at the BP at Port Augusta. My plan was for fuel and a bite to eat. I had passed a couple of other petrol stations to get to this one because I think this is my best option for a sandwich or something else light to eat. The driveway is full but I find a gap and squeeze some fuel into my bike. Turns out I made the worst choice. The toilets are being renovated so they're out of action, the food service area is being renovated so it's out of action, and the EFTPOS machine at the counter has stopped working and there are 10 people queued ahead of me all requiring their cards to be pushed through the old cher-clunk paper machine. 22 mins later i'm back on the road. I've turned around and I'm heading south.

18:13 The roadhouse near the Port Pirie turnoff has toilets and a couple of hot dimsims (they are not related). It's a lovely evening. I stop here and watch the sun setting over the gulf. It's a perfect evening for riding. The weather around 20c. The sun is down. The road isn't too busy.

My original plan was to head south to Port Wakefield and then east to Renmark, but by the time I get there I'm a good hour ahead of my ride plan so I keep heading south to add km.

20:42 1547km I find myself in the inner suburbs of Adelaide. It's a balmy Friday evening. I still feel great. Plenty of people out on the roads, but the traffic is flowing well. I am into the inner suburbs and I stop for fuel (you know, after doing one of those very long right turn, turn right again, turn right again manouvers that you have to do in cities with no u-turns allowed and concrete blocks along the centre lanes to discourage it. Fuel up and I check the receipt. BP Thorngate. These cities are full of suburbs I've never heard of.

At the servo my Sena 20S battery runs flat. I've had it paired to the GPS all day and streaming podcasts from the Garmin for most of the day so I'm very happy with the battery longevity. 17hrs of continuous use is pretty good. I have a small battery pack in my pocket and a usb cable so I put the sena on charge.

I retrace my route back to the Northern Expressway, which takes me east - go figure!?, through Gawler and onto the Sturt Hwy, following the Murray River again. A few cool patches but mostly still warm enough for my vented summer gear.

23:43 1797km I roll into Renmark and roll up to the McDonalds next to the 24hr BP. There are already a couple of bikes here. I have a quick bite and a chat. By midnight there are more riders arriving. After getting a finishing docket and a bit of a chat we head back to the hotel. I can hear the music from the public bar from my room, and I think about going downstairs for a quick beer, but by the time I sort out my paperwork and have a shower the bed is looking too tempting to leave the room.

#2
Thanks for the post Nev and photo's. You just pointed out something I have never thought of doing "I have a small battery pack in my pocket and a usb cable so I put the sena on charge." Thank you, just shows that you can always find new ways of doing things. I normally plug the Sena lead into a power socket on the dash of my bike, really like your idea I wonder how many recharges for the sena that you could get out of the battery pack?

#3
It is certainly starting to get cooler in the mornings now down here in Melb which adds to the layers of clothes required or turn up your heated gear.

SA is a nice State to ride in and it good to see you in Renmark.

Premier Member
#4
tj189 said:
I wonder how many recharges for the sena that you could get out of the battery pack?
Click to expand...
I think the battery in the Sena 20S is about 600mAh. My small battery pack (95mm x 45mm x 20mm) has a capacity of 5200mAh (weights about 150g - don't even notice it in pocket). I reckon probably conservatively 3-4 charges of the Sena from a single charge on the battery pack. The great thing about the Sena is that you can continue to use it while it is being charged and I don't even notice that there is another cable running from my helmet to my pocket while i ride.

I also have a 15000mAh battery pack i keep in the tankbag (one of those jump starter batteries - but I'm pretty sure the jump starter was wired up with incorrect polarity in the factory so I have never connected it to a vehicle battery). It has both 240v and 12v charging so when i'm on the bike, it is on the 12V charger. From that I can charge other items in my tankbag including the small battery pack. That big battery pack also has a high amperage USB plug, which means it can give a rapid charge to modern mobile phones capable of receiving a rapid charge (about 50% of phone capacity in 1 hour). Off the bike that battery pack can also charge all my gadgets plus has about enough stored capacity to recharge my Surface Pro computer.
Last edited: Apr 15, 2017

#7
Great read, thanks. Nice pic of the dust. Lovely to catch up. I think I'm a sunday rider now.

#8
It was nice to see you again Nev. The whole battery thing is getting out of hand isn't it? I had a change of batteries for the phone plus a mini charger battery pack, and technically I could have stopped to hook up the SENA to the USB charger lead that comes as part of the Garmin Zumo 590LM but, a bit like the photos that I didn't take, that didn't get done either. I figured that with 130 odd km to go, what could possibly go wrong?

With such a great location for the muster, we all had a grin from ear to ear, yours even more so.

Premier Member
#10
Thanks for the report

Premier Member
#11
Thanks Nev. 17 hours out of a Sena battery, that's good. These days I need to recharge my SMH10 after about 8-9 hours.

#12
Nice ride and ride report Nev and a good photo of the Renmark Hotel . . . its such a nice building.

I too charge my Sena 20S from a battery pack similar to yours when it gets towards the end of the day - the good thing is that I then plug the battery pack into the charging point on the bike and leave it in my tank bag during the day so its always full by the time the 20S needs a charge. I also use the charger to top up my phone when I am off the bike as well as the Sena SR10 (that I use to interface with the UHF radio) - its quicker and more convenient than carrying various charges and leads into a hotel room each night - just the battery pack and the appropriate leads to charge what ever I have that needs charging.

Premier Member
#13
Late getting to this one Nev. A top report of a top ride. And some great photos to accompany it. Thanks for the battery tip. I'm running the Sena10s and when the battery fails I plug it directly to the power outlet on the bike. Power outlet on right side of bike with Sena on the left side of the helmet makes for cumbersome cord placement. The rechargeable battery sounds the bees-knees.
You must log in or register to reply here.
Share: Facebook Twitter Reddit Pinterest Tumblr WhatsApp Email Link