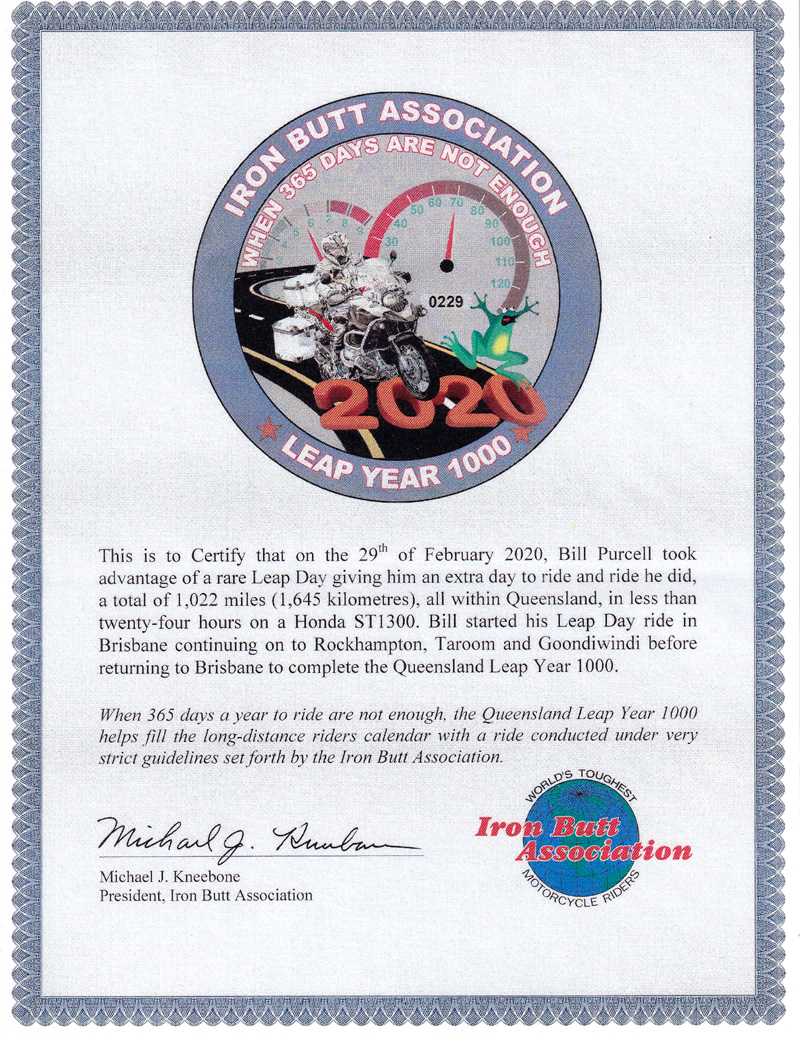 The challenge went out to ride at least 1000 miles (1610 km) on the last day in February this year. I mention the two units of measurement because this certificate was only printed for the 1000 mile event. When I told people I planned to do it, one fellow rider who has been the victim of some of my LDR Long Stories said he'd like to "give it a go". Equipped with too much food but more sleep than I usually start off with, he was at the servo at midnight raring to go. That scored him the job as my photographer for a Start Pic. We both ride ST1300s, but his is a bit thirstier than mine. He'd had it adjusted since our last ride together, but each refill confirmed his was still consuming more fuel. 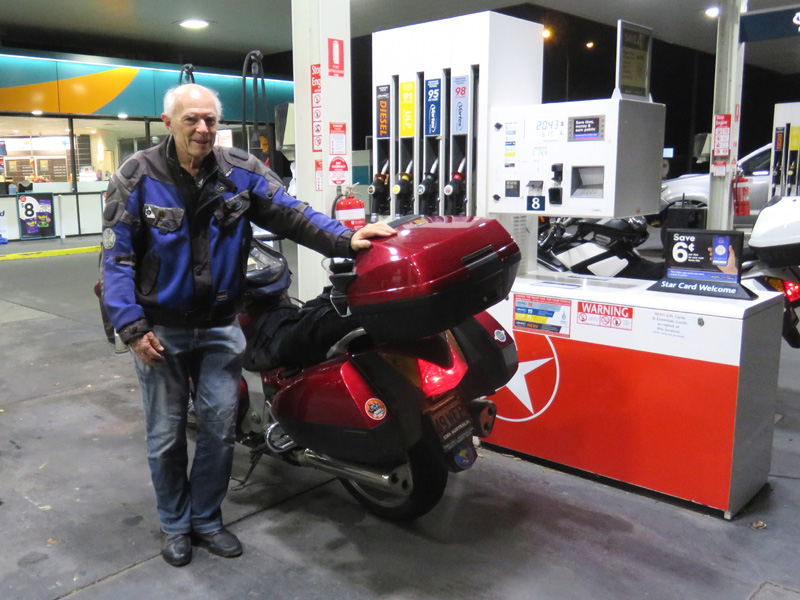 In Queensland the safety boffins decided years ago that they would solve the fatigue crash problem by posing trivia questions on roadside panels to keep drivers awake. Works for me, as I've never fallen asleep before the answer display is reached. The question for Rocky is "What is it famous for?" There are examples of the answer in various locations around the city. The best one is on a busy roundabout with nowhere to park except on the road, so this one in town will have to do. At least the Brahmin bull is life size: 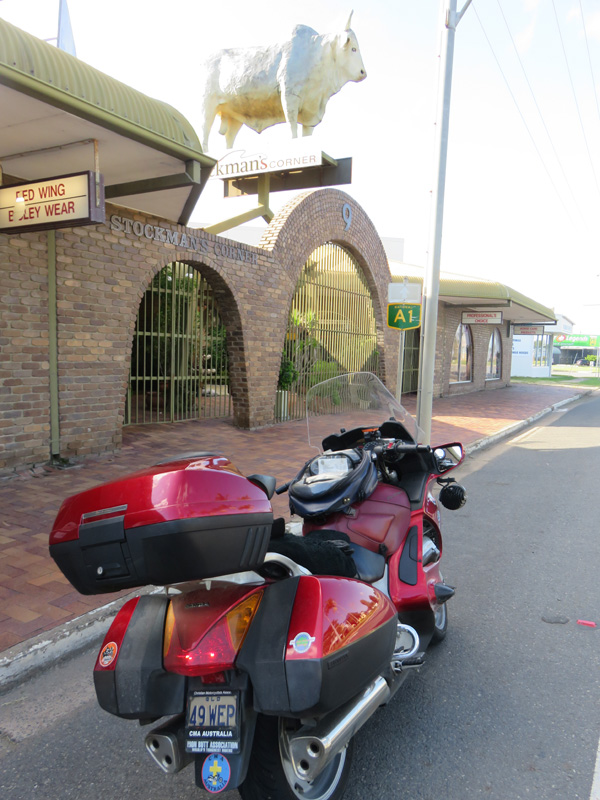 Back in the 50s my Dad was a mines inspector for the miners' union. We lived in Rocky and he'd take Mum and me on the occasional trip out to Mt Morgan. He'd stop at the Bouldercombe hotel to have a drink with a few of the workers to get their views well away from the bosses. He'd park the Ford Prefect under the Tamarind tree opposite the Royal Hotel and bring Mum a shandy and me a bag of chips. I fondly remember those chips. The pub is still there, but looking very forlorn. 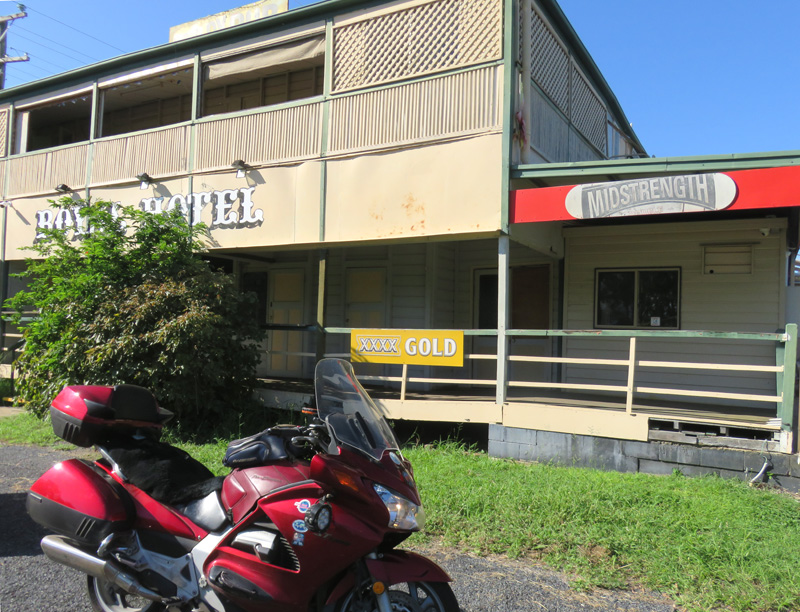 Similarly the mine is still there, but these days the gold comes from the tourists' wallets. The historical features of the town are well preserved, and we glimpsed them on our way up to the Lookout. 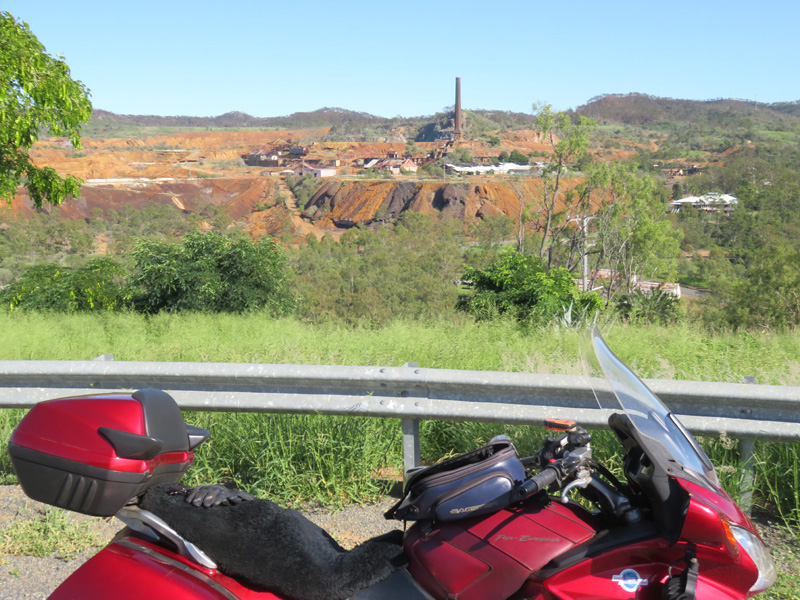 Down the road I pulled up next to Banana Shire's namesake in the town of that name. Steve was peckish again and happened to have just the right prop for the photo. If you didn't know, the yellow bull lent his name to the district. 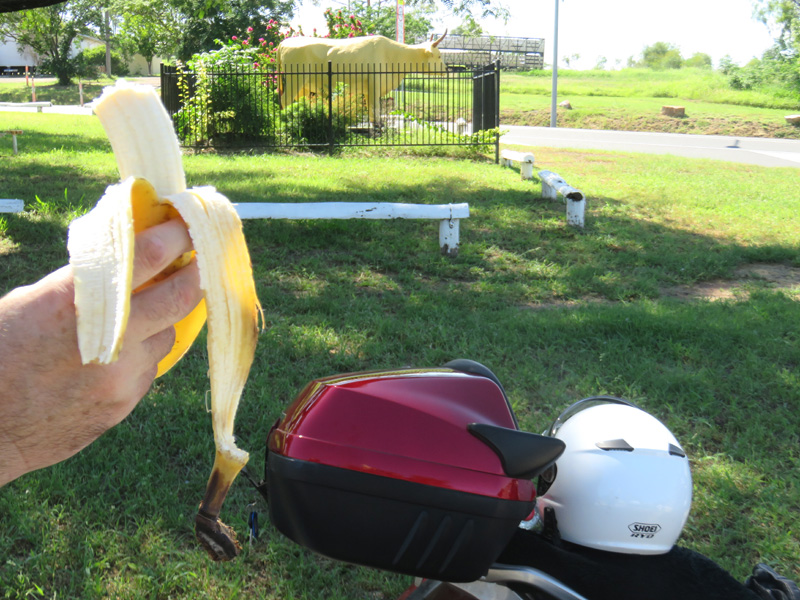 Before my family moved to Rocky we lived in Cracow where my Dad worked in the Golden Plateau mine. He was a keen fisherman and we'd go out to the Dawson River to try our luck. That river flooded not long before we were there. It came right up to the town road in Taroom. 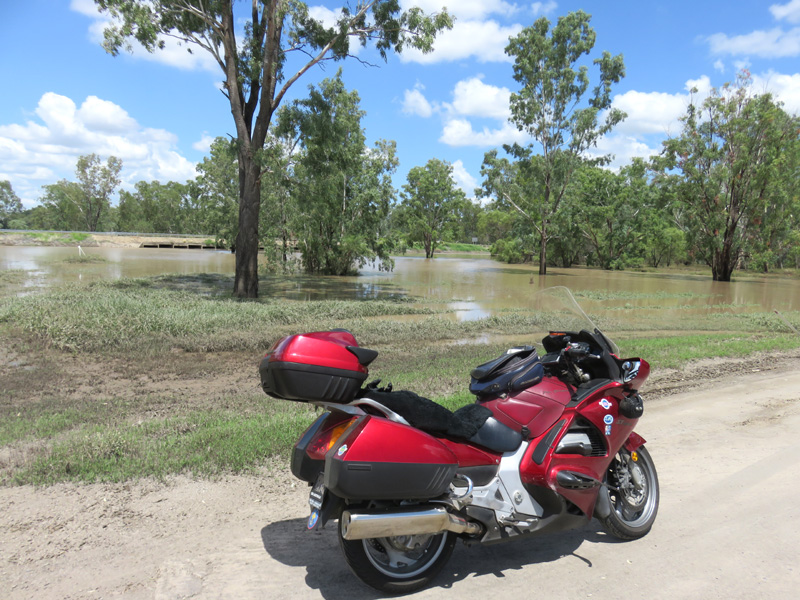 The Leichart Tree is in much better shape than Barcaldine's historical tree. It's definitely less controversial and hence less vulnerable. The town has
virtually grown around it. 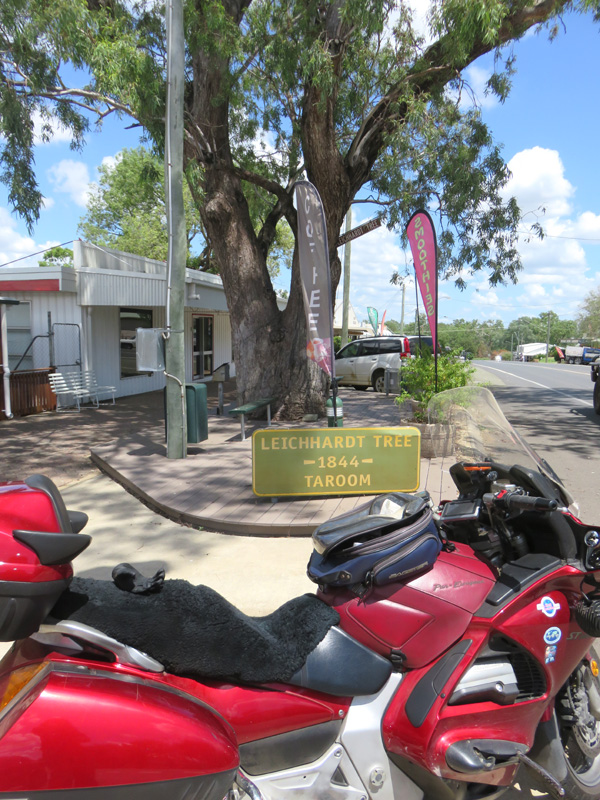 Steve was quick to break out the picnic and a bit surprised when I assured him that LDRs snack so we wouldn't require the picnic table under aforesaid tree.
The road from Theodore through Moonee Crossroads to Goondiwindi is very tough on bike and rider, comprising unrelenting sharp undulations. I found I needed to take some weight in my legs because I started to feel my back was going to give me grief before too long. Since then I have had to pay for a shock absorber rebuild. My mechanic assures me 145,000km is good for a shockie.

The Goondiwindi corner docket included the strongest coffee milk to fortify the body for the final leg.

Back in Brisbane everyone was out on the roads to let us know we had definitely left the bush. 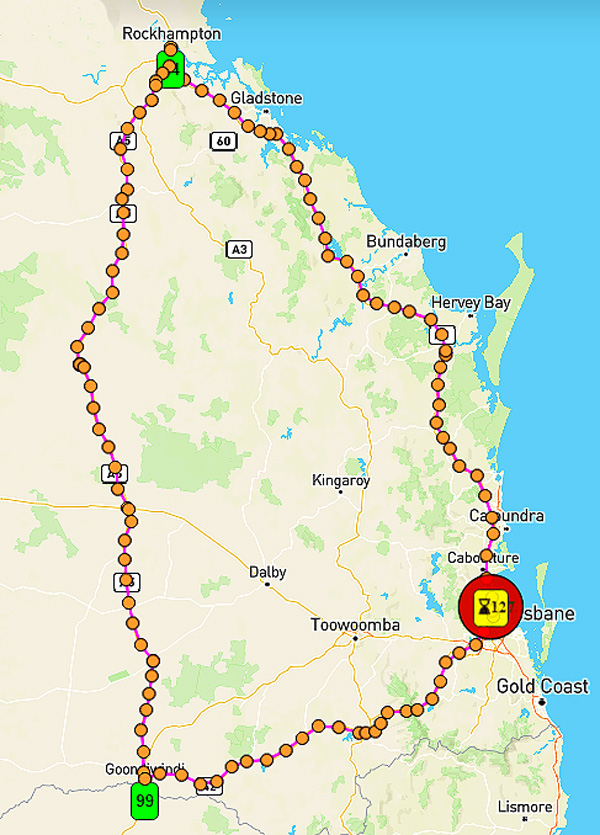 When the certificate for my 21st November 2019 SS1600 arrives my joy will be complete. I've mentioned it to IBA USA a few times, and again tonight.

Premier Member
#2
Onya Biggles. Hope you waved to Thommo's Mum on the way through Bouldy!

#3
Thanks for sharing Bill, enjoyed the read. Well done.

Premier Member
#4
Great write up Bill. What a grat ride and certificate!

#5
Thanks for your report Biggles. LTP and I have had morning tea next to the bull named Banana also, unfortunately we didn't have a Banana to eat at the time.

Premier Member
#6
Sounds like a lot of bull Well Done

#7
Well done Bill. Another interesting certificate. Quick turnaround on the time it took for delivery.

Well done, I really enjoyed reading this and it reminded me its been a long time since I was up that way in Qld.

Premier Member
#9
Great read Bill. I would agree with your mechanic re the shock, it’s amazing how we can get used to a failing shock, I think it has something to do with the giant level of aggravation to get the thing out on these Honda’s, the F6 unit is at about 100k at the moment and I’m dreading the job.
Great to see a certificate actually arrive in these difficult times.
Well done.

#10
Nicely done Bill. What better way to 'use up' the extra day!

Premier Member
#11
Vlad said:
Great to see a certificate actually arrive in these difficult times.
Well done.
Click to expand...
The IBA excelled themselves. It was posted on 24th March, less than a month after the ride. But the lack of flights meant it took two months to get here.

Premier Member
#12
The iba are doing a fantastic job: i submitted a ride the other day at about 1730 (our time) and had a reply confirming its approval at 0720 the next morning! Haven't received the certificate yet, for obvious reasons, but completely blown away by the turn around time! Thanks Howard!
You must log in or register to reply here.
Share: Facebook Twitter Reddit Pinterest Tumblr WhatsApp Email Link