#1
I had this plan for a while and was looking for a cooling off in hot the weather we had been having in order to execute it.
The timing and the weather forecasts showed a small window for a run at it this week, and would provide a nice gift to myself just before Christmas, to help me get through the crazy week that it sometimes becomes.
I usually start this distance ride at around 2 or 3am, but as my plan was for a bigger outing (BB2500 all being well), the planning was a bit tighter to transit some areas in the daytime and others more safely through the night.
So, at 0600 (Thursday 21st) I left the Waurn Ponds BP heading East. 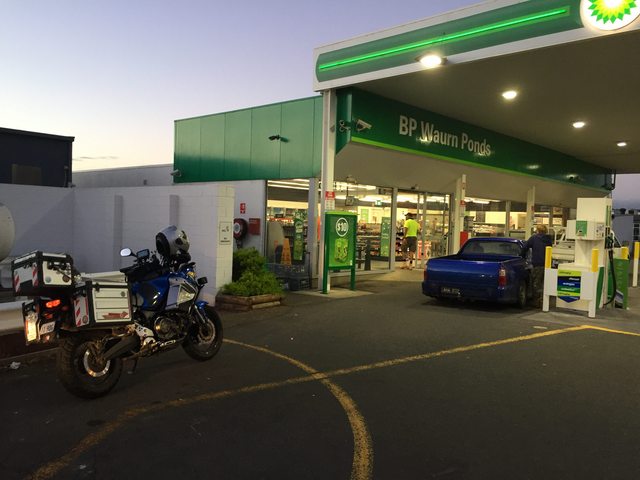 Have I said that I really like having a BP24hr Servo less than 1km from home… and 500m to the Princes Fwy M1/A1 system? Mmmmm… I do.

The Melbourne traffic was threatening to clog up, and I knew I was cutting it fine with the timing, but I think I got through JUST before the peak when it becomes a motorway car park! Outbound East from the Melbourne area in just over an hour, saw me have smooth running all the way along the rest of the freeway system, then out to the first fuel stop in Bairnsdale.
The weather was perfect! Low 20’s and light winds. 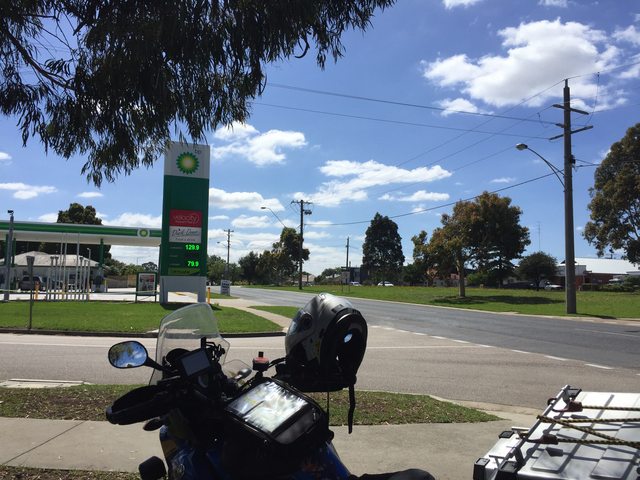 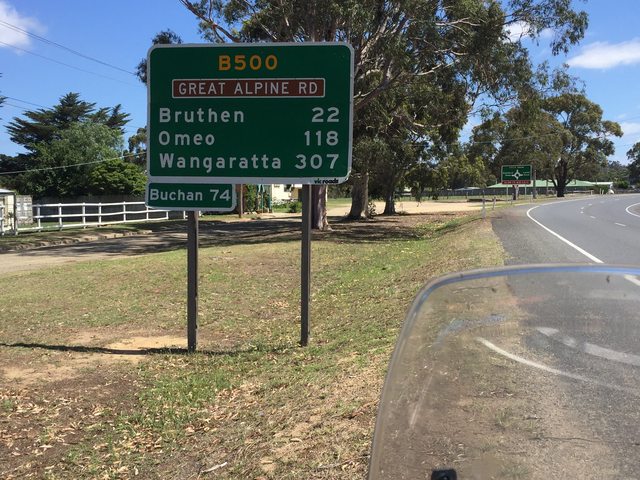 A beautiful run up the Tambo Valley and into Omeo. Obligatory snack and coffee at the café where many a cuppa has been had with mates, including our mate Pat on our high country rides.
Then onto the exciting bit, up and over Mt Hotham. No traffic anywhere. A few cars of sightseers and walkers and other crazies, but very few on the road.
The weather had warmed up, but still only mid 20’s.
The GAR is a beautiful, world-class road, with many beautiful views, countless corners and bends, and the yellow lines and orange poles signify entering heaven! 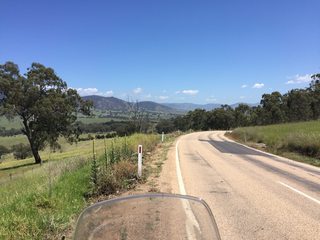 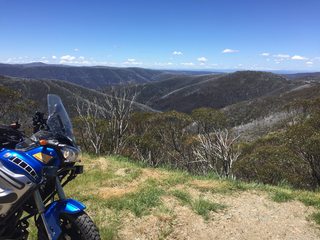 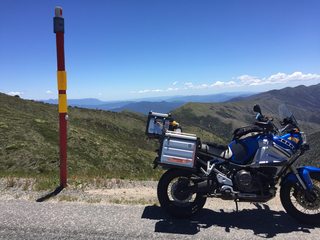 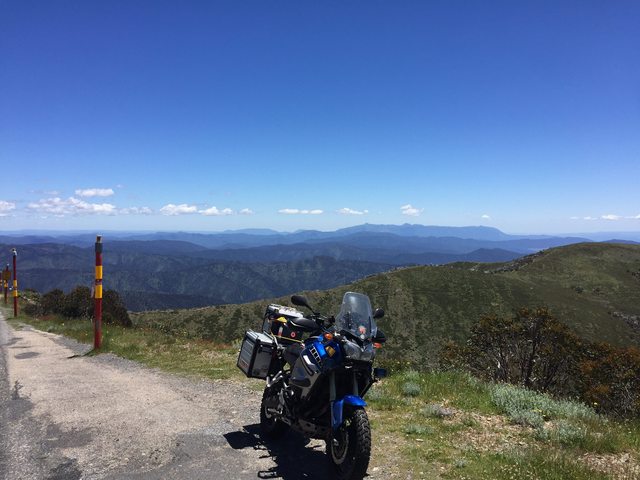 However there was some debris on the road from recent storms, needing much sustained concentration, I think these factors, and the heat rising and pushing 30deg as I came down off the mountains, contributed to my fatigue later in the day and night. More on that later.

On into Wangaratta for fuel, then onto the Hume into Wodonga, passing the 700km mark, for a little extra distance needed and corner docket.
The Caltex seems to no longer be called Wimpys Roadhouse. Not sure why. 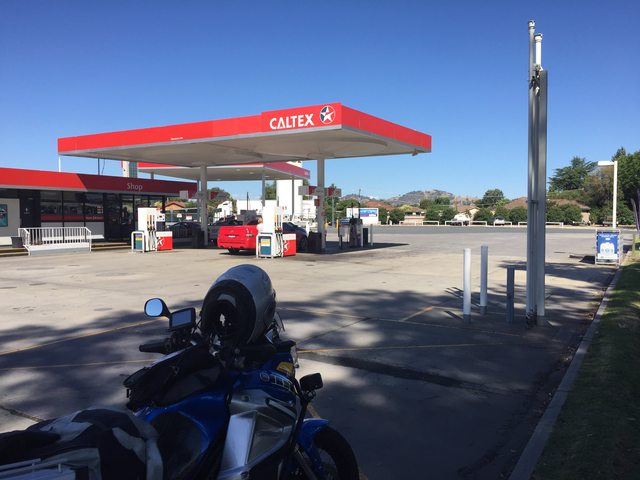 Then off for the slab down the Hume snoozeway. Boring as usual, but handy when you want to make good time and distance numbers. My relationship with my chronic pain also began coming to the fore at this time, telling me what to do and screaming at me to stop what I was doing! Regular and quick stops provided some relief. So does standing up on the pegs at a $1.10!!
All the way to Epping BP (Cooper St) truck stop, passing the 1,000km mark, a bit of a break, then around 8pm, off around the Melbourne Ring Rd and onto the Calder Freeway/Highway, which at that time was very light traffic and before dark o’clock.
As darkness descended around (West) Bendigo, fuel from the new Apco24 fuel was got, and the night section began.
Into the night was where the tiredness from the mountain run and the heat of the afternoon began to make it presence felt.
So by the time I got to Wycheproof around 11.30pm, I had to have my first powernap.
Powernap I hear you say…
Well my body had other ideas! So an hour later I woke on the hard old park bench to get going again.
All the way to Irymple (Mildura) I was constantly stretching and moving on the bike to attend to the pain, mostly knees and low back, warding off micro-sleeps, and stopping and getting off the bike when either or both of these became too much. I had to stop at Red Cliffs, only 10km from before my turnaround point, my body demanded a powernap, which I took on the bike, taking 15 min to complete, and a record start time of only 2.5 seconds!
I had the feeling during this stage that my plans for a 2,500km ride may be in jeopardy, but would continue best I could and wait and see.
Sure enough, after leaving Mildura, things didn’t get any better, and the battle continued.
By the time I crawled back into Ouyen before 6am, I had crossed the 1660km mark, I was really pushing the schedule for anything bigger, I knew the sleep and pain challenges were not getting any better, the servo had opened, so the decision was made to call it quits then and there.
As it turned out it was a wise choice.
I have never before felt so tired during a ride, and my breaks and naps having so little effect, it was quite a devastating point to reach.
It was easy to actually make the decision as it was probably made for me. Rule #1 – check!
So I rang Jenn, passed on the news and rested for a while before heading home.
I had captured a nice sunrise just out of Ouyen. 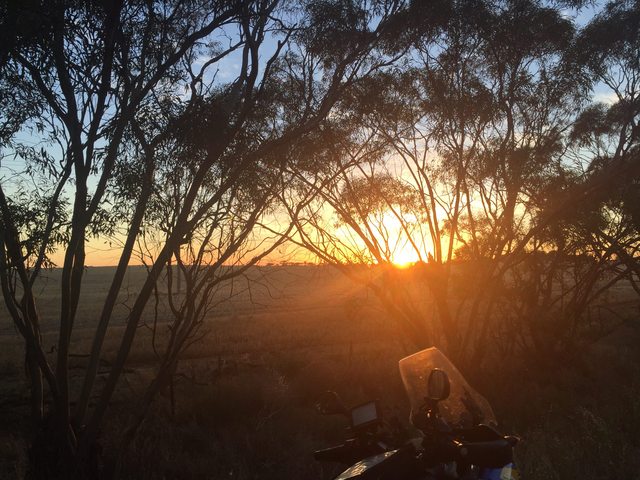 The trip home was a big enough journey in itself. A mere 450 km from Ouyen to Home, but the internal battle with pain and fatigue continued. The temps in western Victoria were pushing back up to the 30deg levels, and I did think about stopping at a motel maybe to get some sleep, but decided would rather push on carefully and get home that day.
Made it home around 3pm, happy but exhausted. Despite the failure of the 2,500 attempt, it was nice to be able to recover the outing with another 1600.
Ironically, with the distance to home after the finish at Ouyen, my total distance was around 2,200km, with 3 hours to spare in the 36 hour window.
Could I have done the extra 300? Nuh. I was done. Lesson learned.
See... I'm happy! 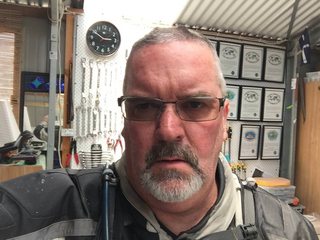 What would I do differently?
Probably NOT include a long technical section like the GAR in a long distance ride.
Probably NOT include a city section, even on freeways, anywhere near peak times
Probably work on my fitness and pain levels better. I have been riding regularly, but not much endurance distance riding since September.
Probably not go out in the hot weather. I’m not so good in the heat any more.
Here’s the map of the route as completed. 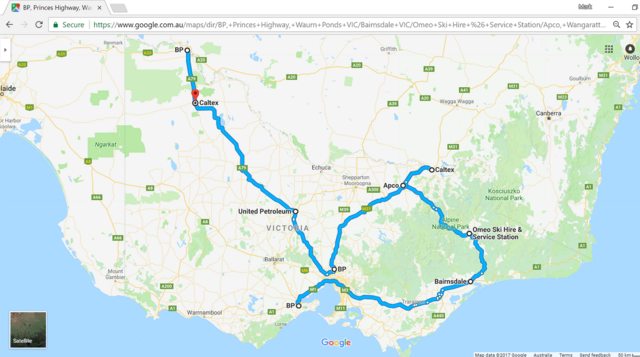 Where was I going to complete the bigger ride? Maybe next time I’ll tell you that.
I never quit dreaming and planning!
Last edited: Dec 23, 2017
M

#2
Nice to read you got out to ride, less so about the rest of the trials. Hope your fitness gets up there to where you want it soon. Cheers.

Premier Member
#3
I thought it was a great plan Nico, I really enjoy classic roads like the GAR included in runs like this.

I hope to include the Ox or the Bylong Valley Way in my muster route.

Thanks for a report on a beaut ride, the honesty and the pics.

Premier Member
#4
Well called Mark. I was following from your old home town, wondering what was planned.
The GAR and Omeo Hwy are a challenge at anytime, let alone on a timed ride. City traffic....midnight is best for me.
I think of a BB2500 as an SS1600 (usually around 19 hours) then 900km in 12 hours.
In cooler weather I still make the mistake of not staying hydrated.....hot not so much.
Thanks for the candid RR and pics.

Premier Member
#5
What an enjoyable and detailed read Mark. Loved the pics and what scenery!

Several factors contributed to a challenging ride even in ideal circumstances. I have also found many a park bench an excellent sleeping companion.

Thanks for sharing mate.

#6
Nico, I could hear you body "screaming out", enough is enough. Good call. Another one in the bag, the balance hasn't gone away, just waiting in the wings for your completion. Great photos to complement an honest report. Cheers.

Funnily enough on my way to work around 7.45am on Thursday as I got on the Monash Fwy at Berwick I saw you heading east, you looked very relaxed at that stage.

That’s a tough route, throw in summer heat and it gets tougher. You made a good decision.
Thanks for sharing this, and your photos are awesome!

Premier Member
#9
The technical stuff can knock you around in the heat Mark theres no doubt, but the pics from the roof of the world are worth it I'm starting to find managing the aging body is top priority these days and it does make the distance so much easier. Thanks for the great read.

#10
Great read Mark and those photo's.. wish I could take that many and in such great detail, well except for the cranky onen Thanks for sharing

IBR Finisher
#12
good to see you out and about Nico.. the roads are still going to be there for another go mate

Premier Member
IBR Finisher
#13
A great read, report and ride.
A few more roads that have been filed away for me to ride someday in the future.
As always rule #1 needs to be followed as those roads will be out there for another day.

Premier Member
#14
Very well done on all counts Nico. Beautiful mostly-blue skies which you have captured so very well. A great ride considering your health challenges. Thanks for sharing the adventure

#15
Just came back for another read - thanks for the great and supportive comments from everyone.
There is always more ahead. Always...

#16
I should have mentioned the photo taken of the ridge line walking track the leads out to Mt. Feathertop, you have also fitted Mt. Buffalo and the Nipple [just to the right of your bike] into it. A beautiful shot of one of the high countries all time classics. Well done.

#17
Great report, ride, photos and decision making Nico. Lots of corners and braking certainly do up the ante in IBA rides. I look forward to reading about your next crack at the 2500 and seeing where you were going to go!

Premier Member
#18
Great report there Nico. Bad luck on the 2500 but smart to call it when you did.
Seems there are some lessons learned and im sure youll find sa way to put the K's down soon for the 2500
Thanks again for the great report
You must log in or register to reply here.
Share: Facebook Twitter Reddit Pinterest Tumblr WhatsApp Email Link