Some of you will recognise this young fella, having met him chatting with Ethan at Urunga during "Ethan's Heart Ride SS1600K" recently.

Meeting Ethan was the catalyst for Nic to step up in his LD riding career and have a crack at a SS1600K. We’d been working on this for quite a while and despite limited bike time, Nic has been putting in the hard work sitting down. Eating, drinking, watching TV, doing homework, playing computer games on the same chair – not allowed to get off the chair for 2 hours minimum. Not much, but not easy for a 9 year old and the best way we could think of to simulate the requirements for a pillion when the rider lives 4 hours away.

That and growing. Long distance riders have as part of the preparation philosophy the mantra to never change anything immediately before a ride. Nic has outgrown his dirtbike helmet. We headed off to the bike shop the afternoon beforehand and picked him up a new lid – a road one this time – and fitted up the Scala comms the night before the ride. Warmer gloves, too because they seemed a likely requirement given the pre-dawn leave and post-midnight return as laid out in the plan. And new boots, on account of the growing.

He’d never heard of Nevertire, until we planned the ride. The adults in the bike shops hadn’t either.

Bike shop guy: Where are you guys off to?
Nic: Nevertire.
BSG: Nevertire? Where’s that?
Nic: Its at the end of the Oxley Highway.
BSG: Near Port Macquarie?
OX: No, mate, the other end. In the middle of the state. We’re riding there and back tomorrow.
BSG: How many days are you going for?
OX: We’re riding from Urunga to Nevertire and back here to the BP around the corner in one day. Its 1600 kays.
BSG: But how many days are you riding for?

Later Nic said to me “He didn’t really get it uncle Pete”.

Bike packed and alarms set for 03:50hr, a drink for breakfast and down to the local Banana Coast Credit Union ATM in Urunga for a start docket as it is the only place available in town. (04:26am, odo 69326km, GPS 0km).

Out on to the Pacific Highway and heading south, a hint of fog here and there and a handful of trucks to keep us company on the seemingly endless roadworks. We’d had a quick discussion about ‘spelling’ our way through the day and in short time made the first stop at Valla Beach.

Then a quick remount and back into the remaining night. The planned route called for only a few corners and those were to keep the sun at our backs. Port Macquarie BP Gateway – the Donut to its friends – for fuel (06:06am, 130km, 24.24L to fill the front and have 10L in the rear aux tank). So a turn here and 15kms later another pic stop in Wauchope:

And soon after Ellenborough in the last of the fog:

We’re riding up the Ox of course. I had hoped that my brother Jason would join us today for a ride on my old/ his new Blackbird, but a 600km loop is a big day so we’ll leave that for another time. A shame really, as the sun was rising and a perfect morning emerged as we started into the glorious dry, empty and relentless twisties of the middle section. I love this road…

Lots of fun through here especially with no traffic around. It was a highlight of the ride for me and only the second time carrying a pillion in about a million laps I’ve done on this road. We punched out the far side of the bends into the bright open Yarrowich Valley, having picked up a letter on the way out:

It really is motorcycling heaven up here. Wide open spaces and varied curves and elevation changes, lovely vistas and mainly letterboxes to mark the progress for the next 40 minutes or so. Rolled in to town under 50, chucked a U-turn and bagged a pic and we were off again:

Nic and I were both wired for sound with the Scala Cardo system, but frankly I don’t rate it. Its Bluetooth and handy, crystal clear and stereo when stationary, but the performance drops to terrible on the run. I’m used to the wired Starcom system, but hadn’t had the chance to wire up Nic’s new helmet so stayed with the Scala we’ve used on shorter rides before. Its main benefit I think is chatting when one or other is off the bike. Anyway, it was fitted but we’d opted to conserve batteries for the run home so made do with the usual yelling, hand signals and well timed thumps to the leg or shoulder to tap out the preset code. Nic was travelling well and having a ball.

Onward west and through the much underrated Bendemeer bends and out onto the shared section of the Ox. Shared as it is the same stretch of bitumen forming the New England Highway round here. Down through Moonbi Range before taking the zig zag back way through to Manilla (09:50am, 426km, 27.93L filled both tanks). Instead of taking TigerBill’s preferred gravel Appleby Lane, we cut west from further north, sliding past Lake Keepit Dam and the 4x4s and caravans it was attracting that morning. Back on to the Oxley Highway and the start of the roadkill for the day with 3 black piggies all in a row. Pigs are smart. I don’t see many killed this way in my travels, and I can only guess that some big vehicle met with a family on the run one night…

Premier Member
IBR Finisher
#2
Gunnedah next and a brief leg stretch for pics:

We were well into a rhythm now. Both of us taking exercise breaks, standing on the pegs and keeping loose. I wear a belt that has handles for the pillion and with those and the auxiliary tank behind him Nic feels secure. Water from a cooler bottle behind him via a camel bak hose on a retractor cord, tic tacs in his pocket and Nic can ride all day like that.

Out through the planets as the day was warming up – 28C at one point, in May. Propped in Coonabarabran for a couple more pics:

But we weren’t stopping here. Westward still, this road slowly changes with more hills and dales and surprising sweeping views for the next 100kms or so before we made it into Gilgandra for a brief stop. Just a freshen up and a leg stretch in the Hunter Park in the middle of town. Chocolate milk for rider and passenger and straight back on board. I’d aimed for an OA in the low 80s and we were doing well. I wanted to turn away from the sun about 1400hr and we were right on track. Another brief stop at Nevertire at the corner of the Ox and Mitchell Highways and we were basically half way (14:06hr, 798km) so a drink for a docket and we turned east for the first time.

Premier Member
IBR Finisher
#3
Dead straight running on the Mitchell. Trangie is a pleasant wriggle in the line and then into Narromine which is much the same: 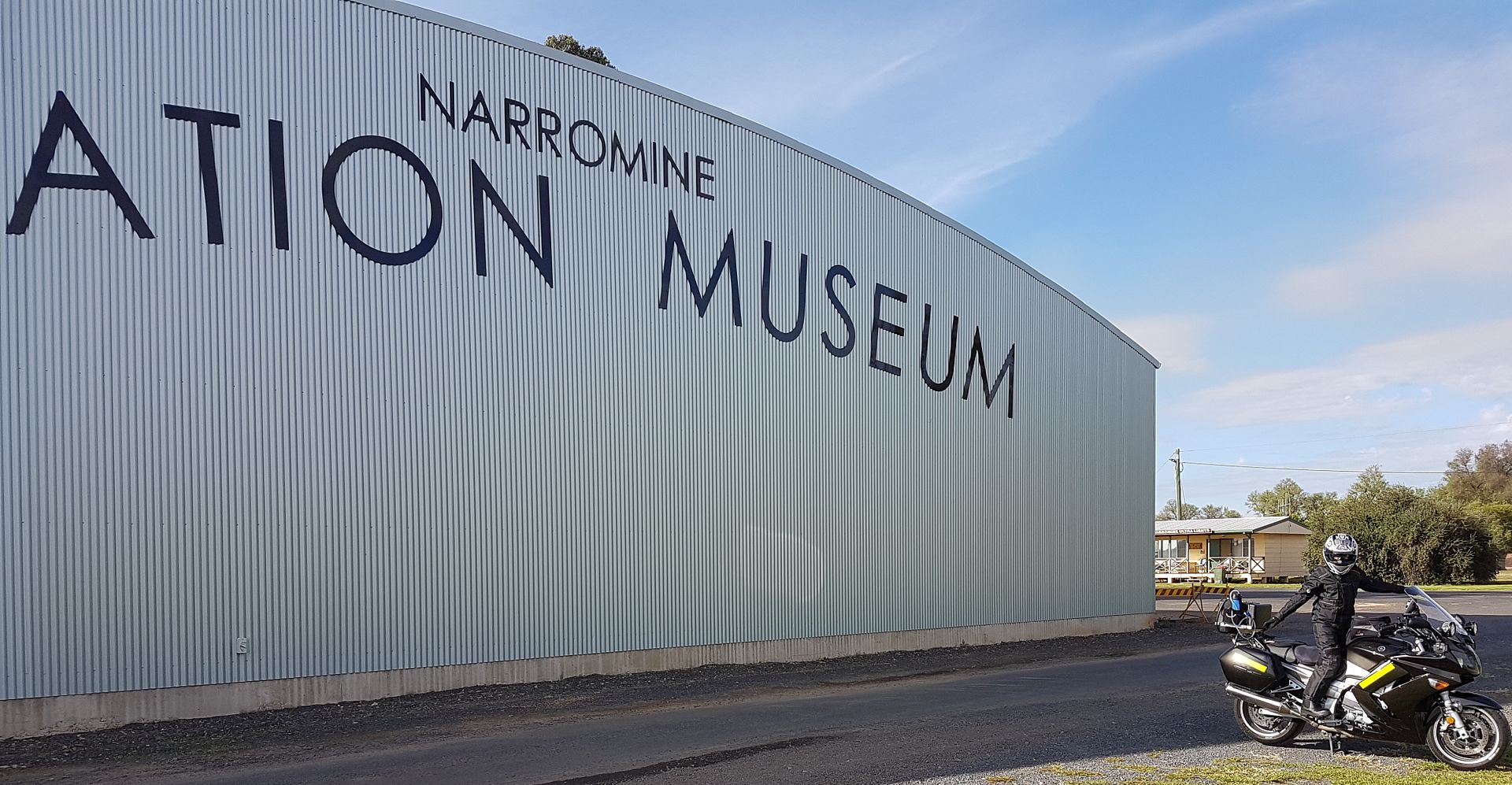 Then in to Dubbo for another break. Me for fuel (15:26hr, 905km, 28.5L), and Nic for Maccas. On a recent training run we burned 48 minutes in a McDonalds on chicken cheeseburgers, fries and a frappe. But not here, not today. Dubbo was busy with lots of through traffic. I dropped Nic off with some cash at the big M and went for fuel a couple of doors up. I was on the clock so not gone for long but had a couple of gridlocked turns to make. Nic was ready when I rolled into the carpark 8 minutes later, helmet on, docket in hand. A little LD legend in the making I think….

Scala’d up now we bounced eastward along the pretty Golden Highway making the most of the remaining sun. Elong Elong for a pic:

I guess it really is May. Dunedoo with the last rays and we both added layers and Nic warmer gloves, across the road from the pub.

I now find this road a welcome sight. Whether it is from the Gilgandra/Mendooran back road that ends here or like today coming in from Dubbo this section of road just feels like home, some 300kms away. I’ve had some bad times when its fully fogged and frustrating. But lately it has truly been golden. Its all in the timing perhaps?

A thousand kays came up near the Black Stump Way, as we kept on rolling with hardly a car in sight. Just ticking off 100km sections, Merriwa another one down, Mt Thorley another. Warm enough, stars out, just a few roos to brake for and very happy riding. Soon enough we were in the bright lights of the city. Well, we’re close enough to Newcastle, but not finished yet. Heatherbrae Maccas (20:01hr, 1281km) for an Iron Butt Nevertired Nic nap and a bite to eat. 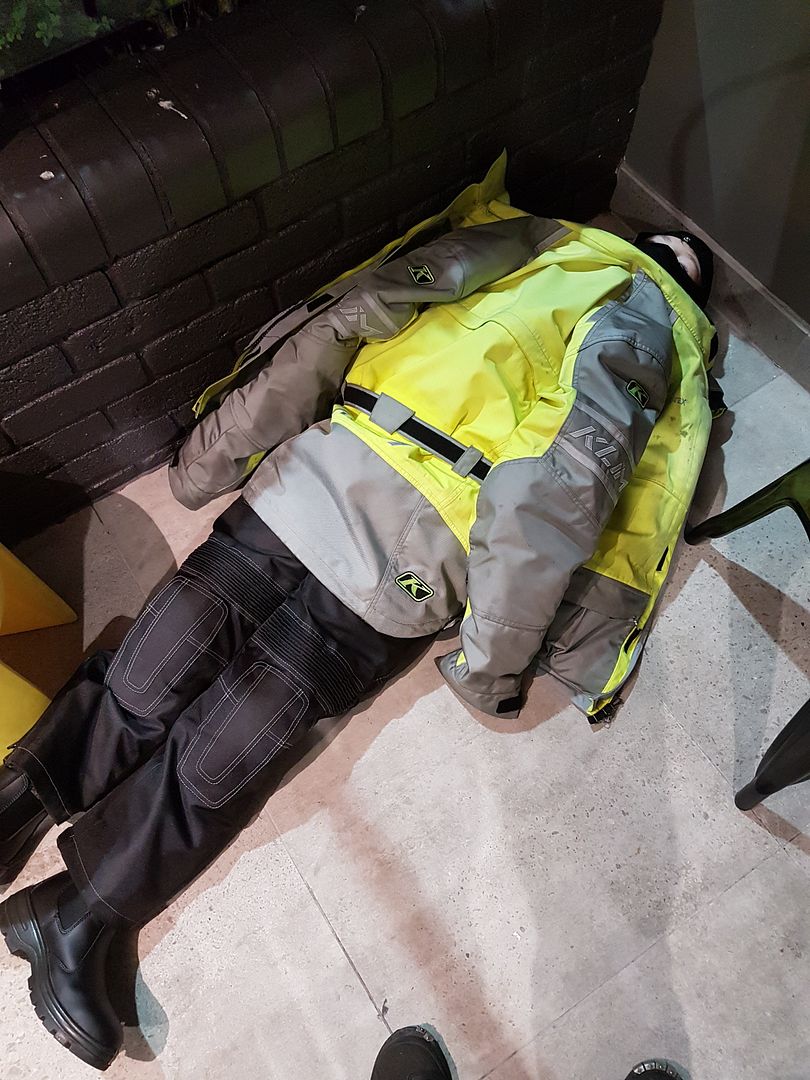 Its just a doddle from here up the Pacific Highway. Boring during the day, but ok at night, it does make for efficient travel on such LD capers. Nabiac (21:39hr, 1401km, 9.88L into the front tank) and another nap for Nic. He’s done very well today so far and just trying to fend off the nods. It must be hard for the pillion on any long day, but with the lack of things to look at during the night even harder. A drink, a leg stretch and Nic was ready to ride on.

Just a couple of hundred to go. Easy.

Macksville for a freshen up and to send a text, then it was just chit chat for the final leg. Past Nambucca, through Urunga, around the roundabout up the driveway and into the lights and cheers of the waiting Hogan family at the Coffs Harbour BP in the middle of the night, an Iron Butt Association SaddleSore 1600K complete (00:50hr, 1645km).

But the ride wasn’t over. We had to get home, 20km back south again to Urunga. Nic piped up over the intercom:

#6
well done young Nic!! It is great to see the youth of today attempt a range of sports. Thanks for posting up Peter

#7
Great work Nick. I wish we could have been there to congratulate you in person, but there is plenty of time for that.
Keep up the good work and if you are at all like Ethan, then Uncle Pete won't be allowed to even start a bike without you.

#8
Thanks Ox for the report. Great ride!
Another inspirational youngster in our midst!

Premier Member
#9
I think that name will stick......Nevertire Nic

Premier Member
IBR Finisher
#10
Crappy said:
I think that name will stick......Nevertire Nic
Click to expand...
Me too Michael

Premier Member
#11
Now he has the bug. Well done NN and Uncle Ox.

#19
what a great certificate for you Nic, again well done and I look forward to catching up with you at the Muster.