Premier Member
#1
Since this isn't a Certified Ride, I'm posting it here for general interest. I mean, we need to do something during this depressing time of cancellations!

The challenge was issued- go ride a FarRide 1000km in 24 hours within the limitations imposed by the Queensland Government for the containment of the Corona Virus.

That limitation which was in place for two weeks allowed folks to travel up to fifty kilometres from their homes for recreational purposes. I drew a 50km circle on
the map and listed the practical extreme locations that could be strung together into a ride. Since "home" was in the formula, I allowed myself breaks there for
refreshment purposes. It's very difficult to document the trip in the usual way with time-stamped dockets for the "corners" so I'm using a start and end photo which is date stamped and gives the ODO reading. Unfortunately the start location isn't in the photo of the docket but the Store ID is 11132 which is confirmed in the last docket's Terminal number for any amateur ride auditors. 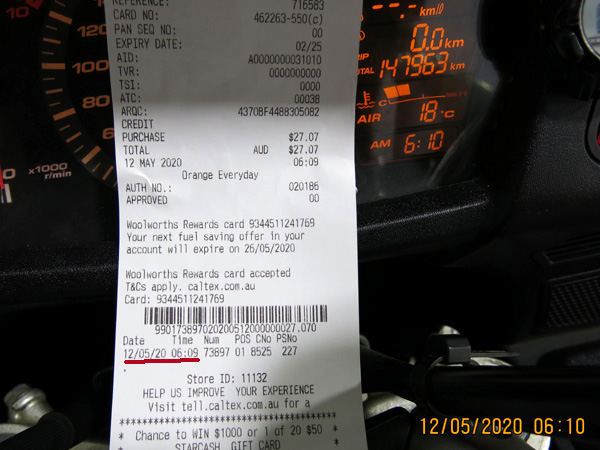 It was 12 degrees on the road out to Bribie Island, and riding directly into the sun wasn't the best planned aspect. Once there, the feature that presented itself as
distinctive was the water tower by the Woorim beach. 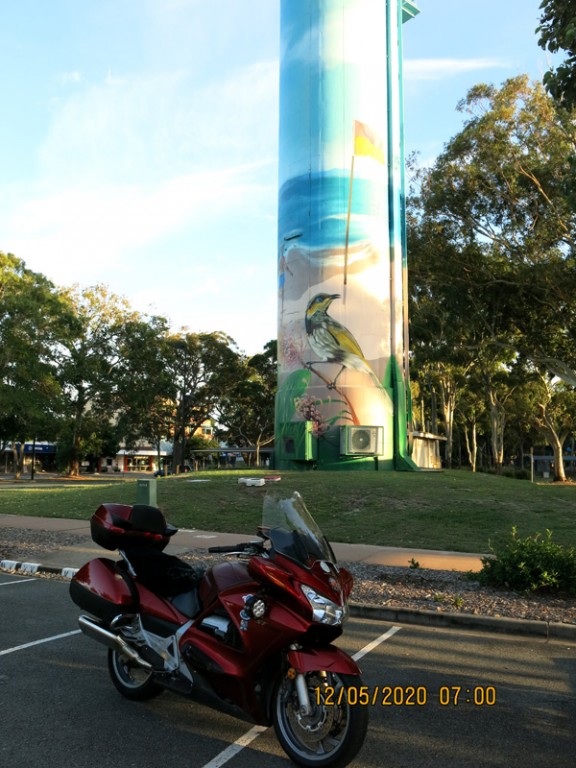 The next destination was the northern-most identifiable point, Glasshouse Mountains Township where they are keeping their publc toilets locked presumably to save on toilet paper. It was then a straight shot down the slab to Yatala, one of the southern points. A simple lap around the exit and on-ramp then back up the M1 to the tunnels and home for coffee and cake.

Part two meant another run up the Bruce Highway to Caboolture and out along the D'Aguillar Highway to the north-western corner at Woodford. It was there that I detected what might be a theme for the ride: decorated water towers. 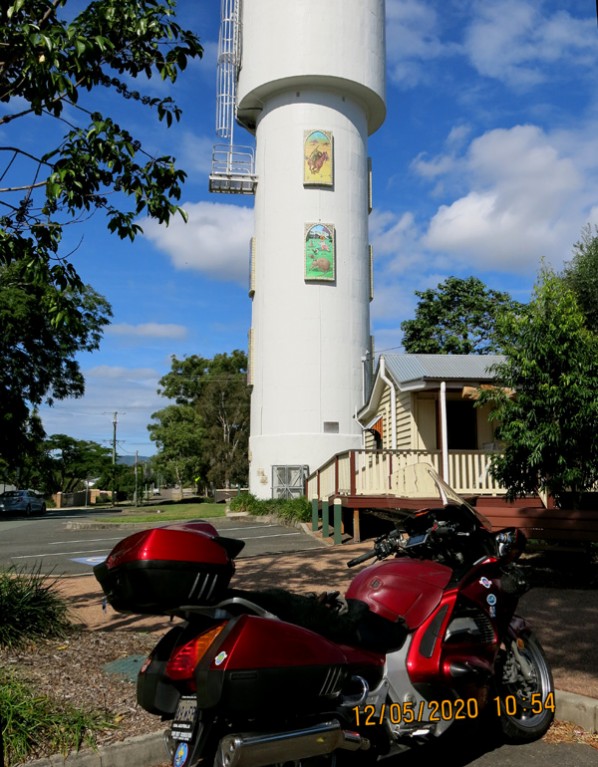 The natural way to go from there is up over the iconic Mt Mee, down to Samford and across Mt Glorious. It's not a very efficient way to rack up kilometres, but it
needed to be done to get to one of the western points, Coominya. I was disappointed that they don't have a water tower, but they do have an historical railway
station, albeit without tracks or trains. It's part of the Brisbane Valley Rail Trail which is very well maintained. The ride from there was across the vegetable
gardens of the Lockyer Valley to Minden, the westernmost point on the Warrego Highway. I sent a SPOT message at the corners, but not all of them registered as green markers on the map. Coominya is number 44. Number 41 was highlighted because it was a refuelling stop at Fernvale. Travelling east, I took Ruby2sday home for lunch.

Heading out north-east to pick up another limit, I spied the Redcliffe water tower. As a representative of the culture of the peninsula, it leaves a lot to be
desired, unless you have a fetish about cell phone antennae. 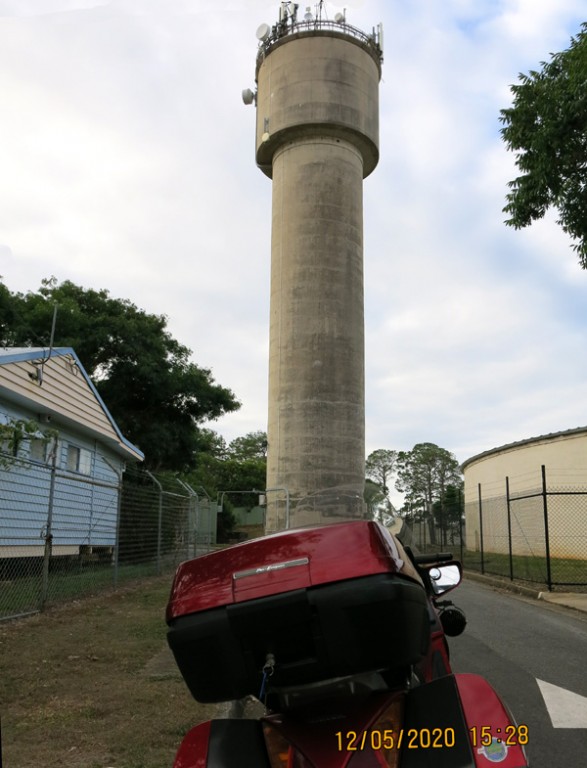 Returning to the city over the other long bridge, I picked up the Gateway Arterial and headed to the south eastern corner, Victoria Point. In the absence of any water towers I went back to Yatala for a refuel and docket even though the tank was still half full. I was pacing the consumption to ensure I could justify refuelling for a finish docket. I pulled into the BP which was fairly busy. As I put the nozzle in the tank (holding it with my gloves on, of course- you never know where Rona is lurking!) there came a blast over the loudspeakers from the console operator including among other indecipherable gibberish, the word motorcycle. Unable to work it out, I asked the next guy over what he said and he couldn't help. Going back to the bike there was another blast, so I hung up the nozzle and rode up the street to the friendly Shell servo. That's dot number 66.

Hopping on the Logan motorway (I used every tollway at least once) I rode out to the Mt Lindsey Highway and down to North Maclean. Heading back up the road I saw the crowning prize of water towers, the Regents Park beauty, constantly changing colours. A photo can't capture the spectacle. 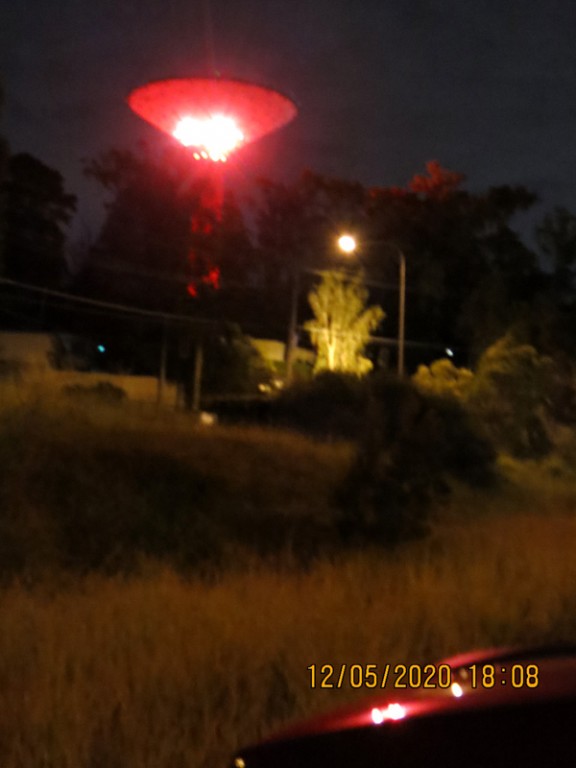 Once more around the Gateway Arterial, I was reading overhead signs extolling the virtues of "social distancing", hand washing and guarded coughing. I thought I'd missed the messages I'd seen in the morning but had been unable to photograph because of the sunlight. However, back on the Bruce Highway I found the "raison d'être" for the whole exercise: 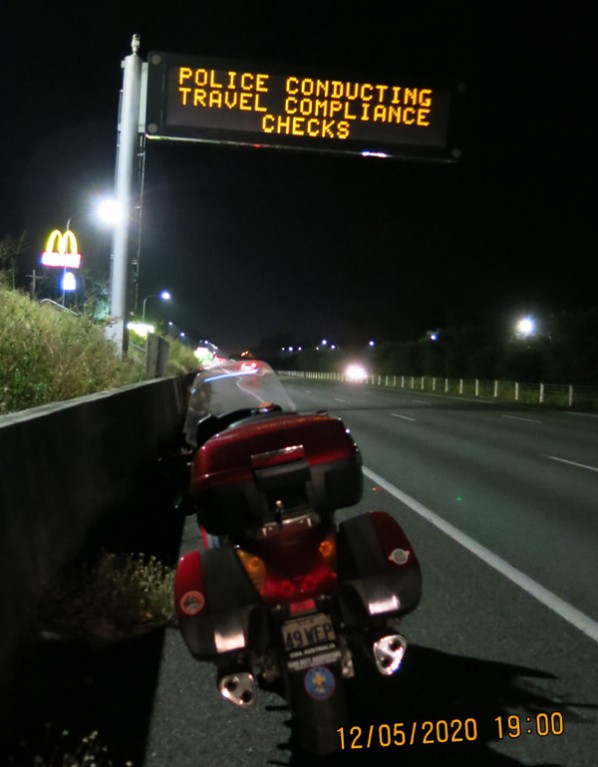 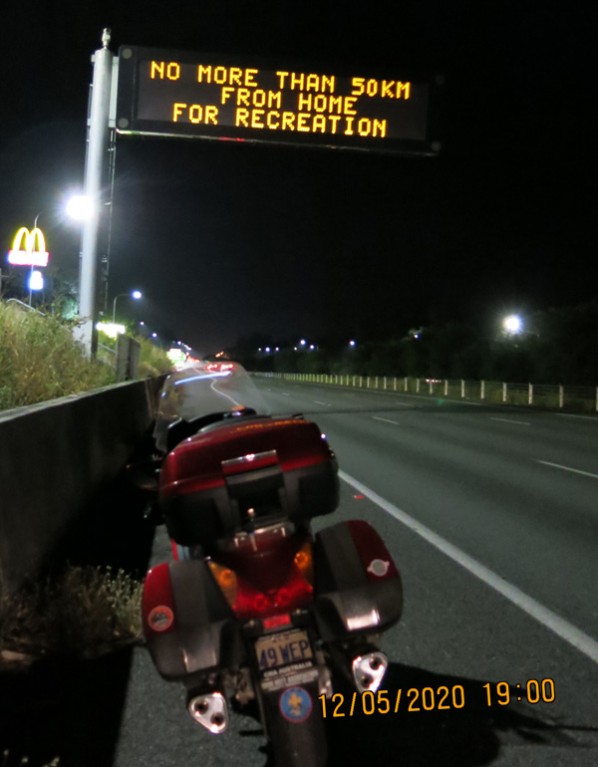 It took a couple of tries to capture, because the automatic camera always takes a second to assess the light and focus, but I got what I wanted. I now had about 900 kays up. One of the philosophies of the ride was to make it interesting. Anyone could have ridden up and down the slab enough times to clock the distance, but that was too boring. The downside of "interesting" is it's a challenge to rack up the distance among urban speed limits and traffic lights. I was now in the position of needing to be creative, so after another trip to the Glasshouse mountains, returning by a back road I made a run out to Redcliffe and back, then down the Gateway for a run out to Nudgee Beach and a trip to the GA part of the airport, then going home the very long way managed to creep over the 1000 kilometres. One final juggle with docket, ODO and camera and the ride was in the bag. 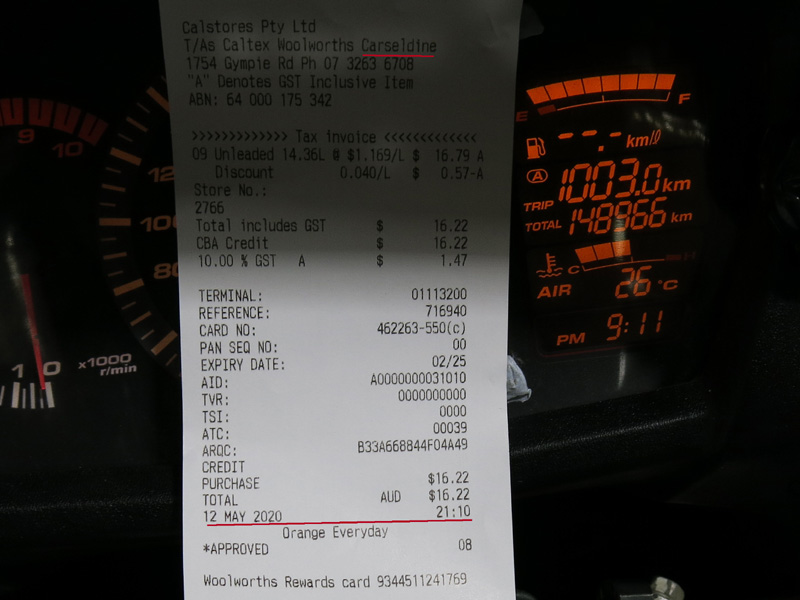 Home then for a late dinner. 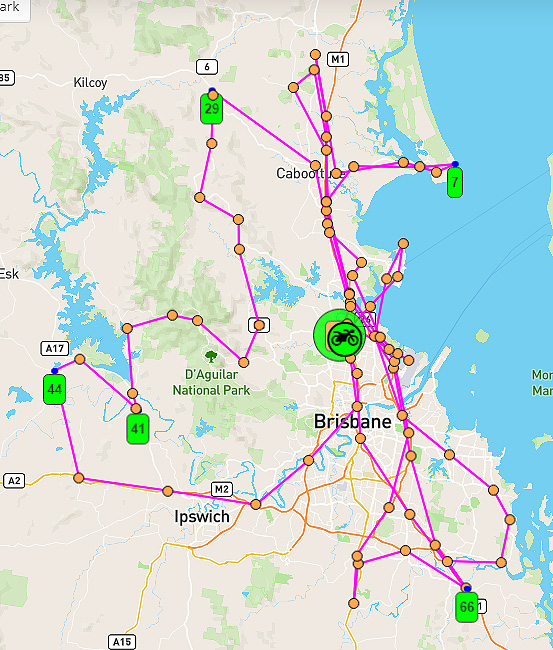 Premier Member
IBA Member
#4
Oh so well done Biggles.
That is just brilliant. I like the thinking mate.

Premier Member
IBA Member
#5
"This message is awaiting moderator approval, and is invisible to normal visitors."