In addition to the above article, a friend who rides and who also drives a Haul truck in the Morenci mine told me today that the closure is indefinite. The mine will be expanding and eating into part of the lower section of 191 below the bridge; AZDOT has been voicing some concern about the costs of maintaining the section of road from Alpine to Morenci due to the little traffic on that road, so the road may be doomed or it may just be closed to through traffic for a while.

From what I understand, you can still ride south from Alpine to the bridge but then you'll have to turn around and head back north.

Staff member
Premier Member
IBR Finisher
IBR Staff
#2
That sucks more than anything has sucked before. 191 between Alpine and Morenci is one of the finest motorcycling roads in the country.

Premier Member
IBA Member
#3
Brian Thorn said:
From what I understand, you can still ride south from Alpine to the bridge but then you'll have to turn around and head back north.
Click to expand...
So, signed as a federal highway, you'd think there would be some effort in 'decertify' the road (from fed to state control - listed as a state highway) in order to even go to that effort.

Granted, mining will supercede a few motorcyclists and others that enjoy 90+ miles of twisty road...

January 11, 2018
SAFFORD – While the Arizona Department of Transportation plans to involve the community in developing long-term plans for maintaining US 191 between Morenci and Alpine, closing this stretch is not – and never has been – among the options under consideration.

“While ADOT isn’t proposing any concrete action, we want to have a transparent and detailed discussion with all stakeholders to determine the best long-term plan for US 191 though this area,” said Bill Harmon, district engineer for ADOT’s Southeast District. “Such a discussion would involve residents, local agencies, elected leaders and other stakeholders. Among other issues, it would take into account the area’s public safety needs.”

The 80-mile stretch of US 191 between Morenci and Alpine is one of the least-traveled in the state highway system, used on average by 81 vehicles per day.

The winding, high-altitude path through national forest that makes this stretch so beautiful for motorists also makes it expensive to maintain: The average annual cost was $658,000 between 2011 and 2016, in large part due to plowing snow and addressing damage from harsh winter weather.

Long-term options that could be developed over the coming years include partnerships with other agencies to share maintenance costs, exploring federal funding and grant opportunities to offset maintenance, operation and construction costs, or turning the stretch over to local jurisdictions willing to take it into their systems.

“With transportation funding limited and nearly 7,000 miles of state highways to maintain, ADOT has an obligation to collaborate with area stakeholders in developing long-term plans for low-volume routes,” Harmon said. “We understand that US 191 is important to connectivity within and between Greenlee and Apache counties, and that must be the starting point for these discussions.”

So they (we the taxpayers) are paying almost 3/4 of a million dollars a year on road maintenance to provide safe passage to (on average) 30,000 cars per year. If they put a toll on that road to cover that cost it would be roughly $30+ per vehicle and most likely higher to cover toll payment processing charges. Would I pay $25 to ride that 90 miles stretch? You bet I would. Would the majority of drivers? Most likely not. We'll just need to wait this one out and see what happens with the mine pits.

Premier Member
IBA Member
#5
Do you really want to open that can of worms (toll roads...) in the state of Arizona?

I'm just sayin' that our illustrious state representatives are focused where the $$$ are - and that's in Maricopa County.

Premier Member
IBR Finisher
#6
I can't even relate how many rides I've taken specifically to ride 191 over the years. Also spent a number of weekends at the Sportsman's in Alpine to ride the run a couple days and then sit and shoot the shit with the owner into the evenings - forget his name at the moment - rides a BMW.

This is the first I've heard it may end one of the very best motorcycling roads I know of - and I do know a few.

Premier Member
#7
SteveAikens said:
with the owner into the evenings - forget his name at the moment - rides a BMW.
Click to expand...
Frank

This is the first I've heard it may end one of the very best motorcycling roads I know of - and I do know a few. Sad.
Click to expand...
Keep in mind that other than the "closed due to erosion at the bridge" information, everything else is conjecture at this point. They may fix the bridge in a couple of month and reopen everything... or they may not. We won't know until we know. If I get any hard info from my friend at the mine I'll pass it on.

Premier Member
IBR Finisher
#8
That would be him, thanks. Over 21 and all that...

I get nothing's in stone but man, just the idea we could lose the ride sux.

Premier Member
IBA Member
#9
Brian, I've propagated this to a couple of other forums, but what I learned today is that southbound is closed at MM177 where it intersects with NF-13 (ADOT web page on road closures https://az511.gov/ ). This is several miles above that last, twisty section that takes you into Morenci.

Your original posts mentions "below the bridge", I'm looking at some ADOT data, and I just found it:

What I've also learned...the current highway alignment has been on mine property for years, and is listed at US-191X - but not signed that way. Look at the map in satellite view for the details you really need.

If the weather improves on Thursday, I'm considering riding to Morenci and seeing what I can see.
Last edited: Mar 12, 2019

#10
This sucks, I was planning a trip down there this fall specifically for that road. Of course I was hitting every other curve between here and there along the way, but still.... dang

Premier Member
IBA Member
#11
Photos either later tonight or tomorrow, but NB is closed at MM175. Unable to see beyond this; turned around at the 'road closed' sign.

Now, what's interesting is possible realignment about a mile south of the mine overlook. There was some heavy earthworks going on, and it lined up with the existing road.

There's a location that has stored dump truck beds. I never noticed it, but there's an old graveyard up on the hill, across the road. I'll have to look at a sat photo to pinpoint it.

#12
Do you by chance have the coordinates for MM175 since my mapping software doesn't show mileposts? It's not big deal if not, if I do end up down there it'll be this fall and many things can change between now and then, I'm just curious at this point.

Premier Member
#13
Jerimiah has already responded and put me on his weekly email updates so I'll pass that on when I know something more...

*The original ADOT Public Service Announcement is listed below with the title underlined.

ADOT will be sending out weekly updates on this project which we will post as we receive them. ADOT update #1
March 6, 2019

This is the first of the Arizona Department of Transportation's US 191 bridge weekly updates to keep the community informed about the status of the road closure. We intend to send out these emails each Wednesday. If you know of anyone who would like to be added to the list, please send an email to [email protected].

A bridge abutment problem was discovered in early February, and after a careful evaluation last week, engineers determined that the bridge needed to be closed at milepost 177 near the Morenci Mine.

We recognize the significant disruption the closure is causing people who live, and work and travel through the closed section of highway. We will move as quickly as possible to reopen the bridge.

Freeport-McMoRan and ADOT are working together to ensure that the proper repairs are made. This week, design proposals are being solicited for the repairs.

At this point, we cannot estimate how long the closure will be in place. However, we are anticipating it will last several weeks.

Thank you for your patience.


This info was found at: https://www.graham.az.gov/365/County...ies-Conditions 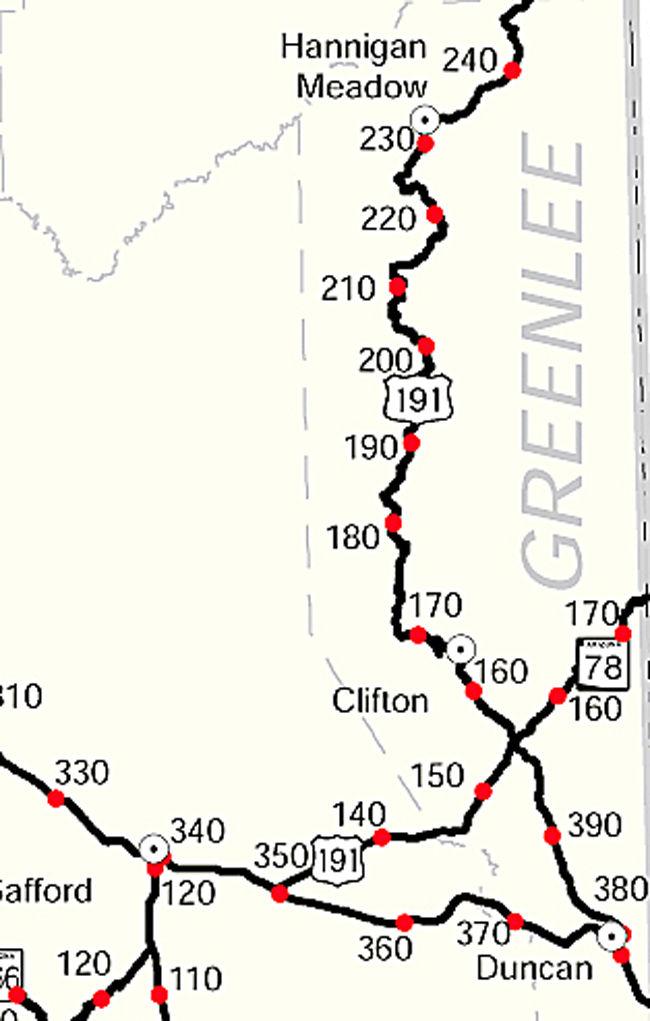 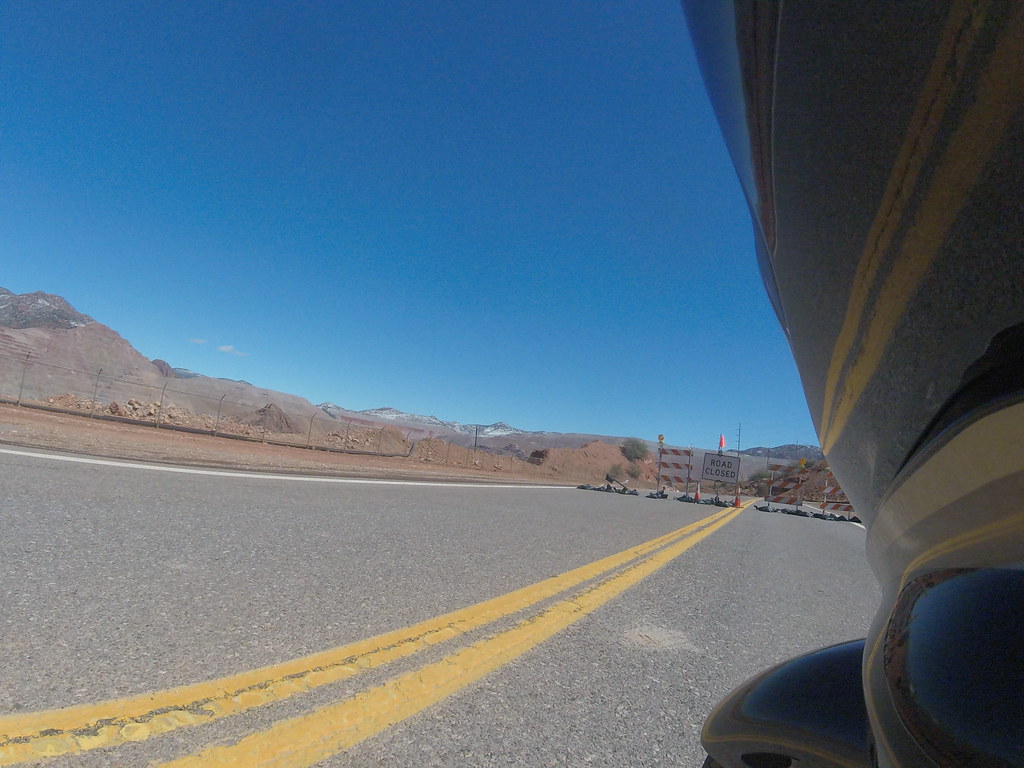 Never noticed the cemetery along this hill... 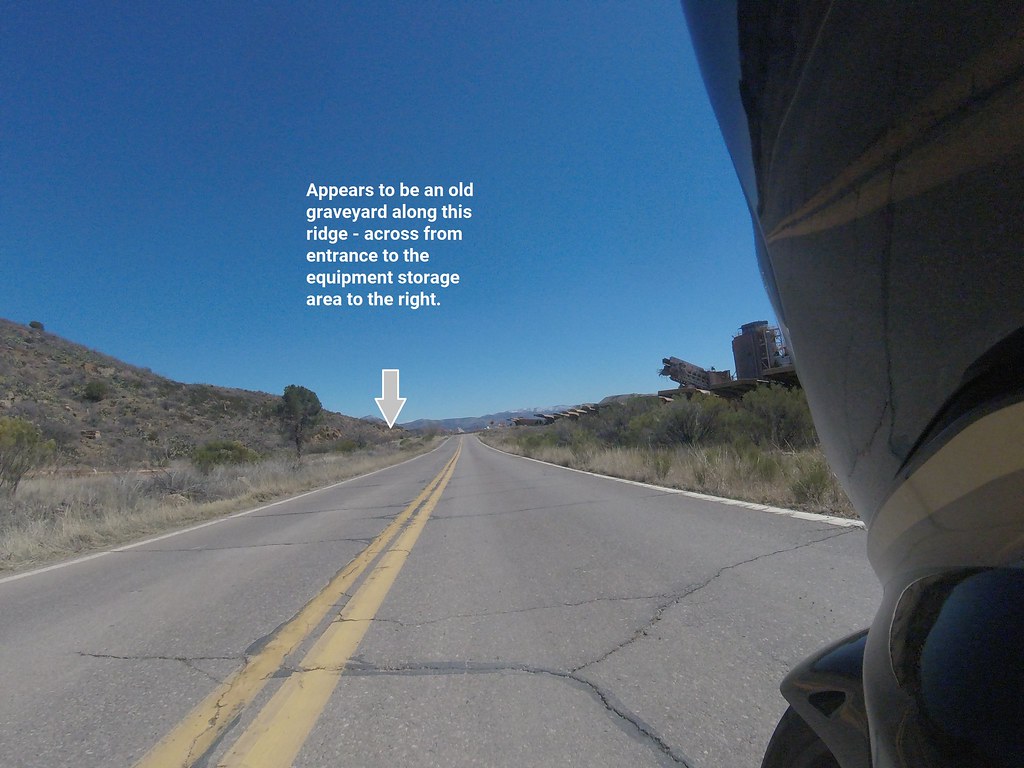 This overpass was recently constructed by the mine and ADOT. I just can't see them abandoning the road. Changing the alignment? Maybe. 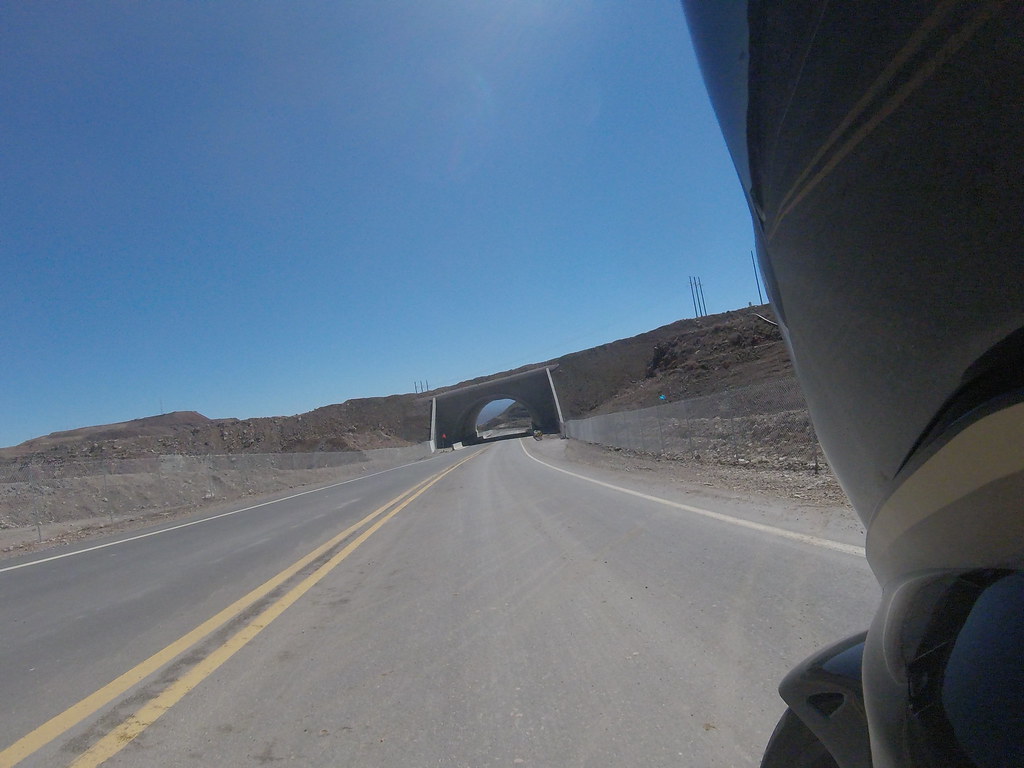 Annotated satellite overview of the northbound closure in reference to the mine overlook: 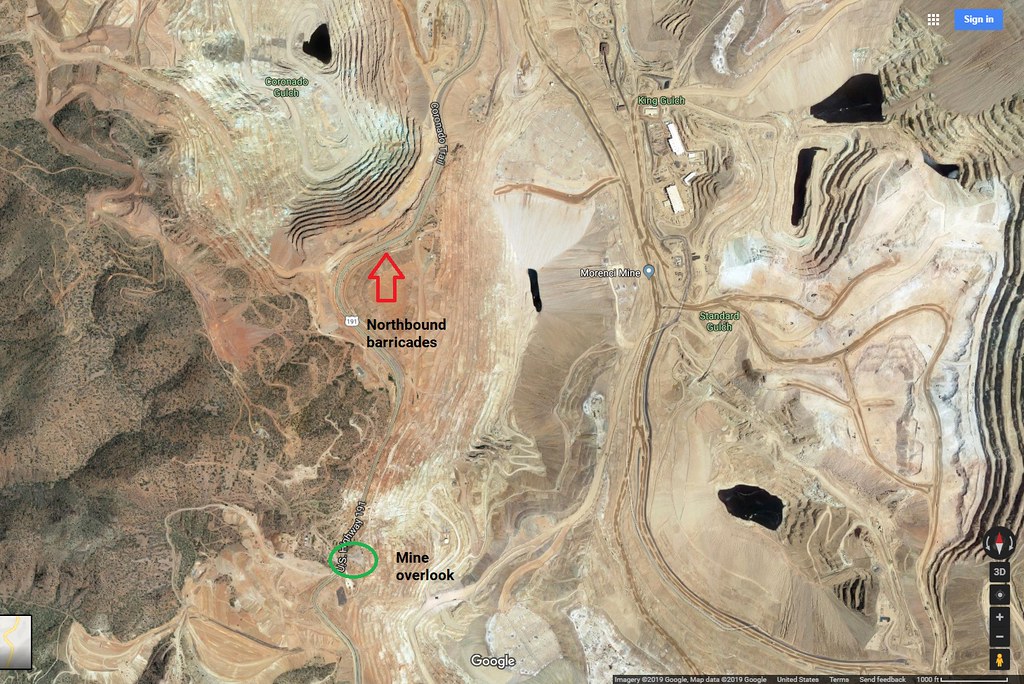 We have some great news to share this week. We anticipate bridge access could be restored on or around March 25. However, this date may be adjusted based on construction progress.
For the bridge to be reopened, a soil buttress (an embankment against the north bridge abutment to prevent further movement) must be installed. To expedite this work, Freeport-McMoRan redirected internal resources and began work on the buttress last week. The contracted engineers, ADOT and Freeport-McMoRan all must agree the soil buttress provides the necessary stabilization required to support traffic before the bridge can be opened.
We will send out a news release and alert to this message group as soon as the bridge opens.
While the stabilization of the bridge site should be complete soon, the actual repair work will still need to take place. The plan is to complete that work with the bridge open, but drivers may encounter occasional short delays until the repairs are done.

Thank you for your continued patience.

Schedules are subject to change based on weather and other unforeseen factors. For real-time highway conditions statewide, visit ADOT's Traveler Information Site at www.az511.gov, follow ADOT on Twitter (@ArizonaDOT) or call 511, except while driving.​

#17
Thanks for the update, it looks like I'll probably be good for my trip this fall!

Premier Member
#18
US 191 bridge reopens near Morenci Mine after repairs to abutment
Brief delays are possible while mine makes long-term repairs
March 25, 2019
PHOENIX – A US 191 bridge about 7 miles north of the entrance to the Morenci Mine has reopened after work by the mine’s contractor to stabilize earth around an abutment.

In consultation with Freeport-McMoRan and its contracted engineers, the Arizona Department of Transportation determined the Coronado Bridge is safe for traffic while long-term repairs continue. Brief delays are possible.

The bridge, near milepost 177, closed Feb. 28, requiring those traveling between Morenci and Alpine to detour through western New Mexico. It was built in partnership with Freeport-McMoran, which operates the Morenci Mine.