Premier Member
#1
The route this year was rather less convoluted than my Muster ride last year. To satisfy the requirement, a straight shot to Mansfield was called for, with the proviso it be via the loftily titled "Pacific Coast Way", since the inland route falls short by 24 km. While it's boring, at least the wildlife is kept behind fences.
My son had taken his family away for a holiday and left us "dog-sitting". Hence my start photo depicts Chilli wagging farewell. 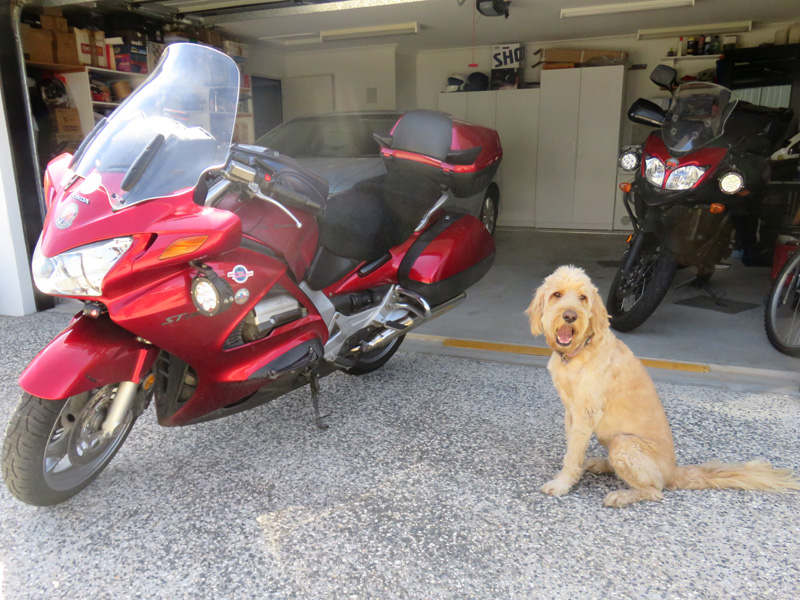 We've all been suffering the major highway roadworks since 1996. There remains about 80 km to complete the work. The Harwood bridge over the Clarence is one of the more spectacular features. It contrasts markedly with its 1966 sibling. And I must confess being able to remember transiting the Clarence in a Greyhound bus on the Harwood ferry in the late '50s, so I've seen some progress. The meandering narrow road along the Clarence and through the villages is still the classic '50s and '60s slog. 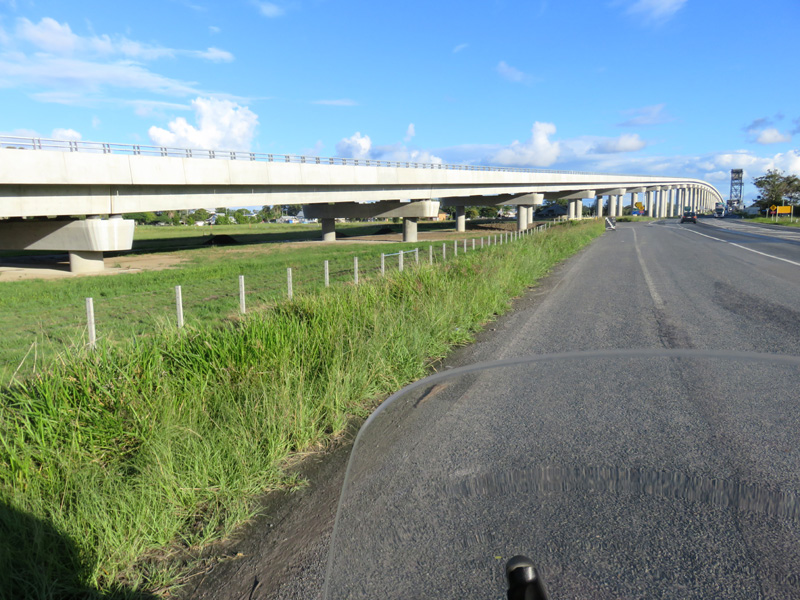 The weather was quite pleasant, tending to cold as the sun set. There wasn't going to be a good sunset shot, so I settled for clouds with silver linings as a token of the night ride to come. 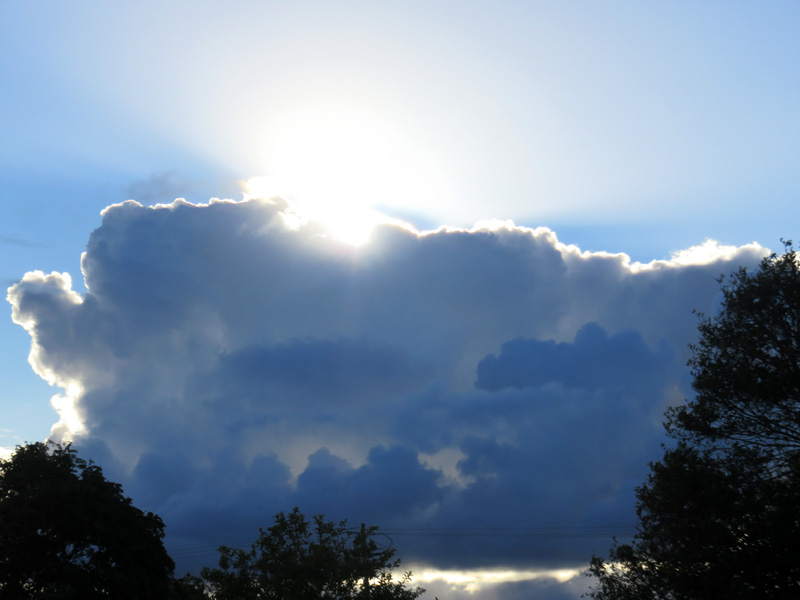 The first stop was my customary break at Halfway Creek, just south of Grafton. It was only a snack break- my favourite: salted roasted almonds. Crunchy and filling with a Coke to swell them up.

I'd left at 1:15 pm "Real Time", and the transition to Daylight Saving time made the appearance of the Golden Arches at Heatherbrae the signal for a slightly more substantial meal. 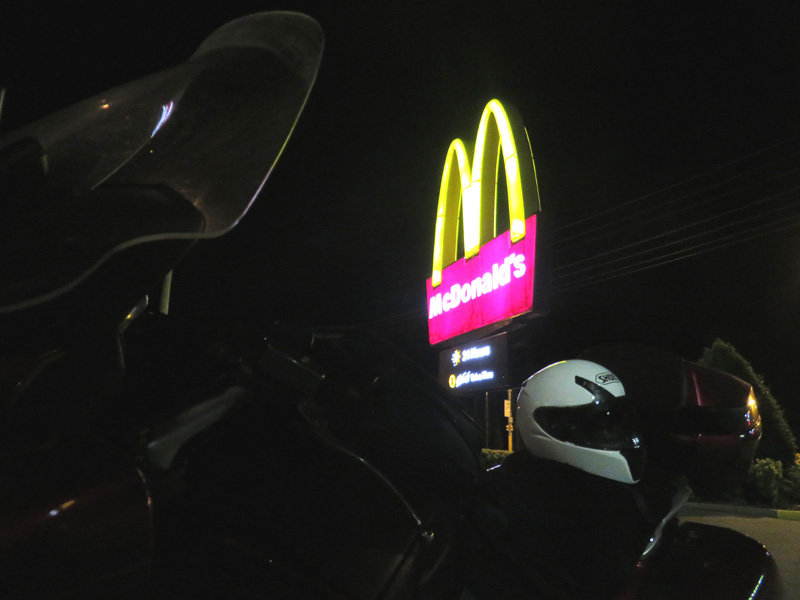 My hopes for a quick run down the Newcastle Expressway were dashed early on, with extensive 80 kph zones of roadworks. The locals were redefining 80 upwards, so I just went with the flow and let the roadside illuminated signs glow accusative red faces at me. Karma caught up with me at the Hawkesbury River as fog had settled over the whole Sydney region. It wasn't too dense, and the traffic was light, so progress wasn't inhibited unduly, but the fog persisted to Picton.

By Yass I was ready for a leg stretch and Ruby2sday was getting thirsty.

Dawn broke while I was down among Victoria's beautiful trees, and so is best depicted with them silhouetted. 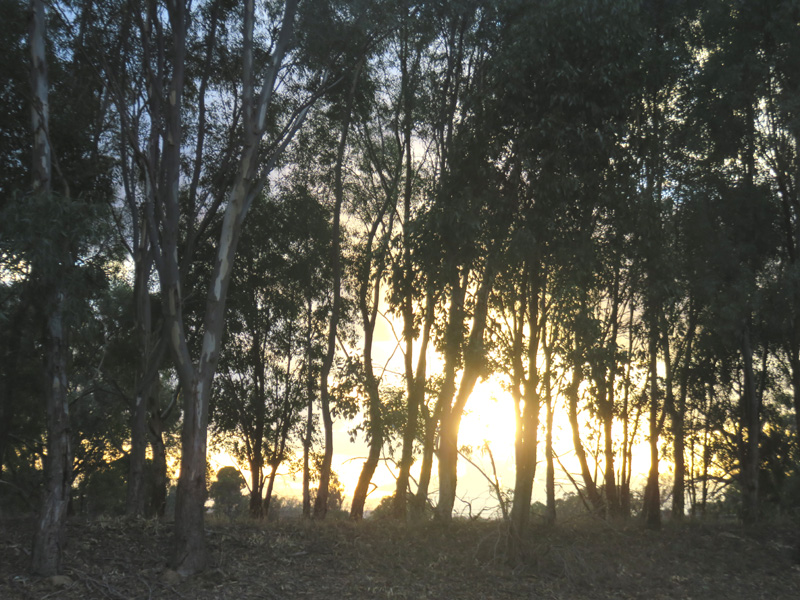 This country residence near Mansfield was blessed with sunbeams. 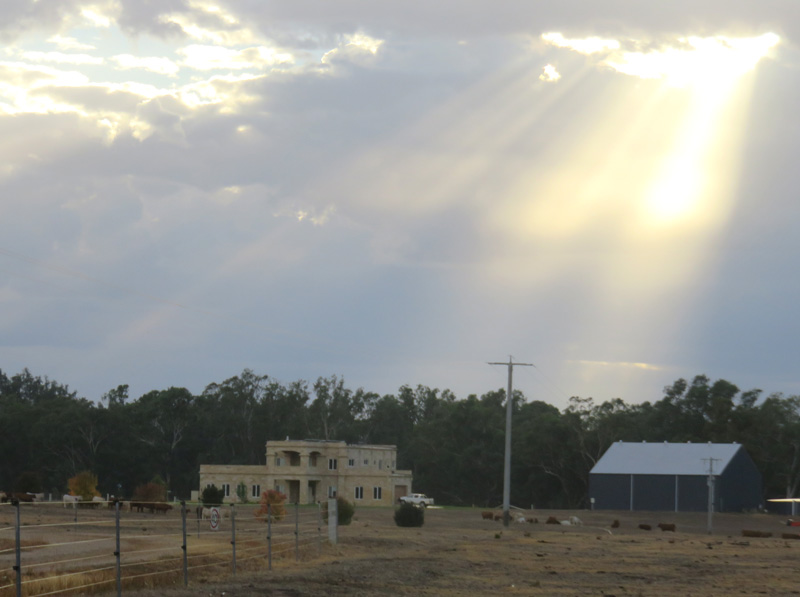 The final docket came from a servo that is the exact opposite of the Yass mega-servo. The little shopfront Caltex there exudes country character. 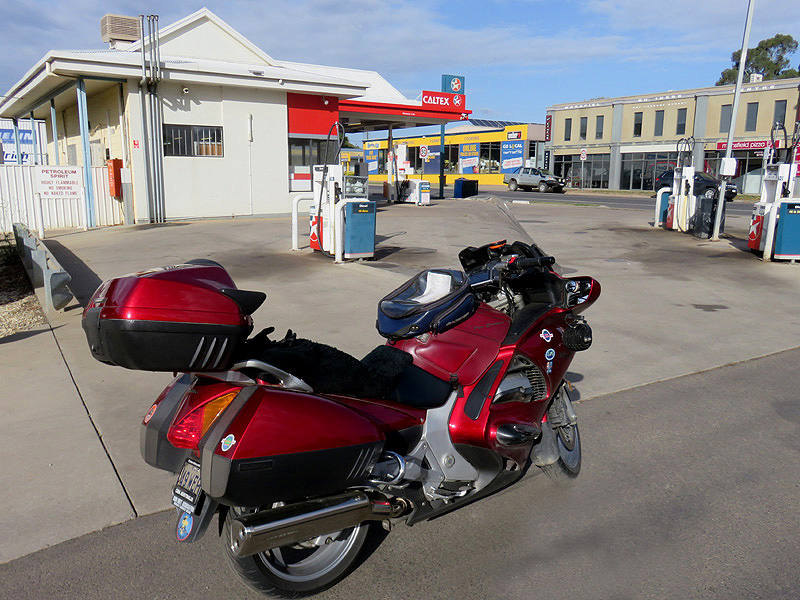 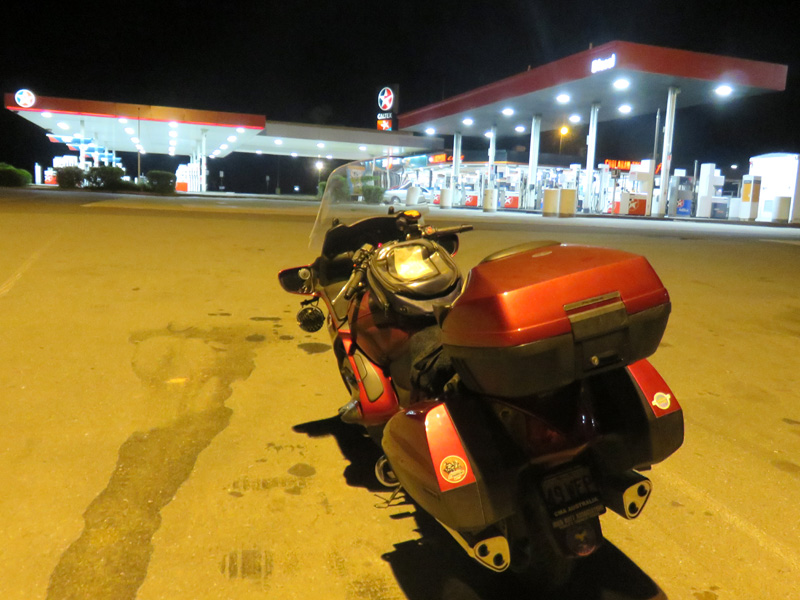 It's just down the main street from the focus of Saturday's Ironbutt riders- the Delatite Hotel. It's "horse country" out here, y'all know! 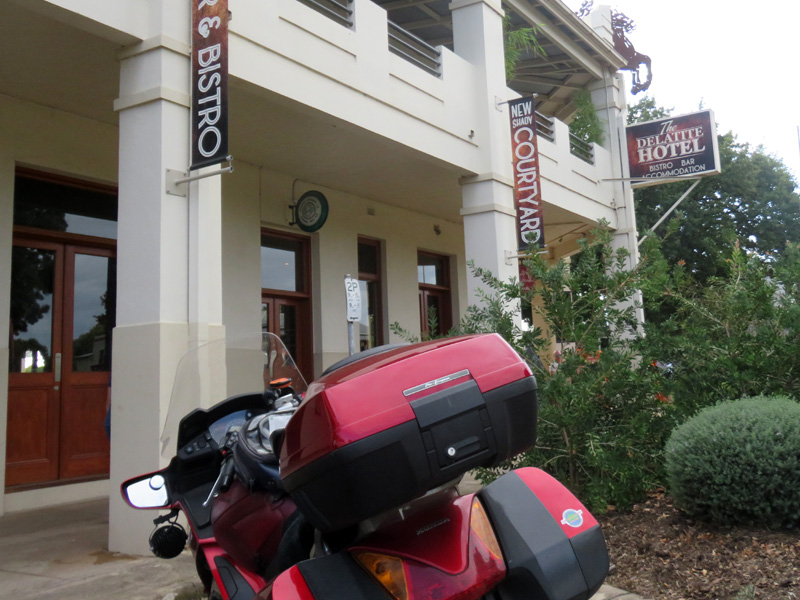 The locals are also keen students of anatomy. 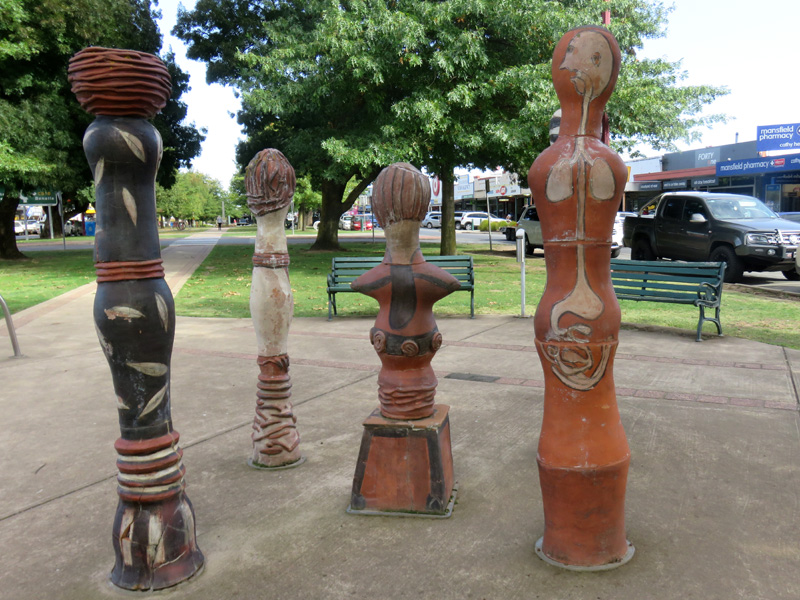 Being close to the ski-fields, they also evince an interest in skiing. Curiously, the other side of the skier is hollowed out, perhaps the better to observe his inner workings. 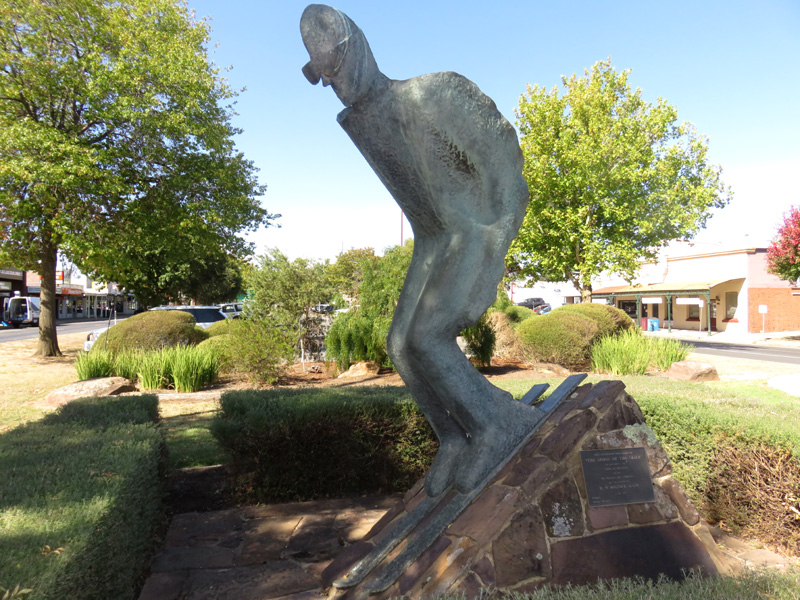 Having submitted our plans months ago, and provided the supporting documentary evidence, we were presented with our certificates. 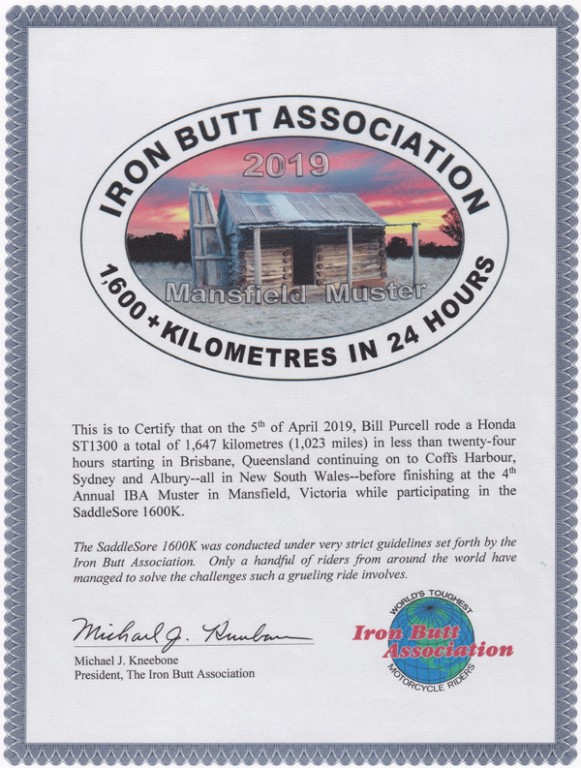 #2
Sometimes the straight run down the coast has to be done to get the kms clocked up in the time frame required.

Well done on another IBA ride Biggles it was good to catch up with you at Mansfield.

The bridge at Grafton is one I should see in a few months with a bit of luck..

Staff member
#3
Congratulations on a safe ride.
We in Mexico requested the sun to shine on our visitors so you could appreciate our beautiful scenery
Was great to catch up once again.
Thanks for sharing your ride

Premier Member
#4
Thanks for sharing and great pics, I especially liked the 'merging of the roads'.

Premier Member
#5
Good work Bill. Thanks for the pics and the report.

What’s not to like about that? Great to see you again!

Premier Member
#8
Another great report Biggles! And a none too shabby ride effort either . Well done on all counts

#9
Thanks Bill, Enjoyed the read and photographs