This certainly exceeds our extreme points, but it started me wondering and subsequently planning whether something like this was achievable here in Australia.
The result was that I came up with Mt Kosciuszko (or more specifically – Charlotte Pass) to Lake Eyre – 2,228m ASL to "??" metres BSL.

The peak at Mt Kosciuszko is actually reachable via a 9km management/walking track, in ideal conditions, but doing so against the National Park rules...
I didn’t consider this a safe option.
So Charlotte Pass became the nearest point and the highest navigable bitumen road we have at an elevation of 1,850m ASL.

The lowest point at Lake Eyre presented some problems with access.
Using the lake bed itself was not an option, so had to find a road that fitted the criteria and with a distance that was achievable. Anywhere to the North part of the Lake was too far and would make the attempt near impossible.
So my research riding in the area last year after the Border Run came up with Lake Eyre South, on the Oodnadatta Track, at the Lake’s Southernmost point. Here the road itself registered on the GPS at 4-5 metres BSL. So this route involved a distance of 1,855km with over 140km of dirt road/track from Roxby Downs.
Still a better option, distance wise, than going via Marree, which would have meant a total distance of 1,926km with over 150km of dirt.

I corresponded with Mike Kneebone over 18months about the concept and he took a great interest in the plan and was very supportive. So much so that he encouraged me to keep it quiet, lest someone else get there first!
Mike himself had done their very first Heaven to Hell back in 2010!

So came the time to put all my planning into action. April was a good time – before the snows in the mountains and after the worst heat of the outback.
I overnighted at Jindabyne with a run up to Charlotte Pass to start at 10.00am.
The sign that greeted me really confirmed that the summit was out of reach. 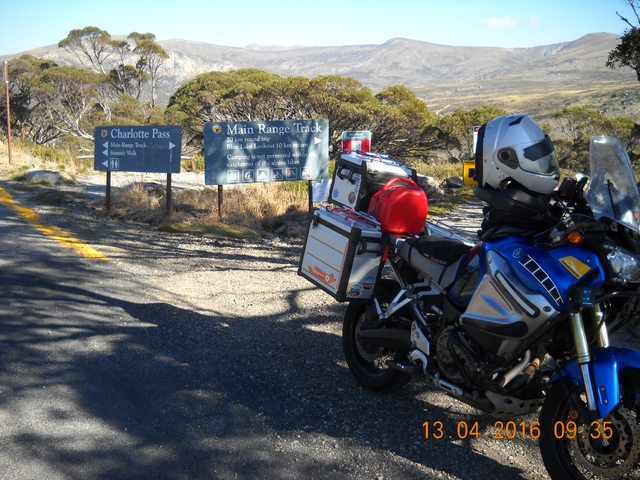 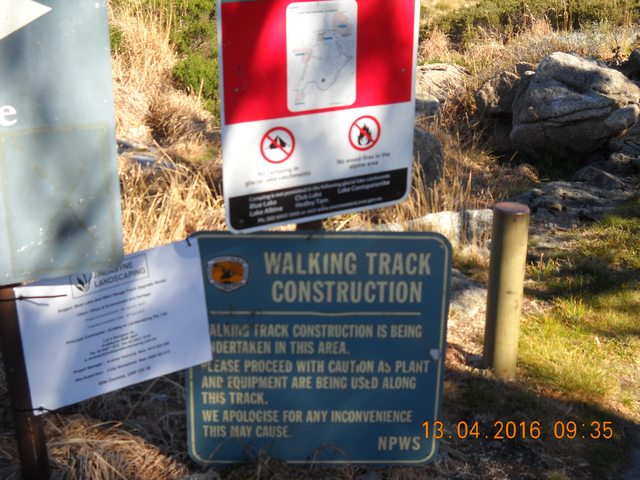 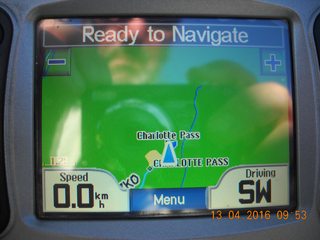 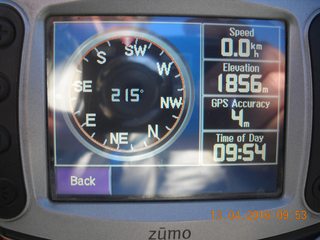 As I had to pay entry to the National Park, I had a receipt, but realised later that I could have used the attendant as a start witness.
As it was, I used the attendant at Jindabyne Caltex, with fuel receipt.
I had a great run through the mountains, out via Tumut, Wagga Wagga and across the Hay Plains, hitting sunset around Balranald.
No wildlife anywhere. Excellent!

Beyond Renmark – everything changed!
Between Renmark and Morgan, along the Goyder Highway, I encountered kangaroos in numbers I have never, ever seen before (and never want to see again!).
I stopped counting as it got towards a hundred, and they just kept coming.
And coming.
Bloody hundreds of the buggers!
Lots of near misses. Forced me to travel at a very much reduced speed.

I only collided with one, it coming from my left side blind spot, hitting me in the left foot.
It felt like it broke my big toe, but all else was in order (later to be self-assessed as swollen and badly bruised but no break).

This “kangaroo corridor” cost me quite some time, and added fatigue.
I slept for a while at Morgan, but longer than I had planned, which combined with the ‘roos, put me behind schedule.
Continuing through Burra, adding some fuel I was carrying, through Port Augusta, and welcomed the sunrise near Pimba.

I arrived at Roxby Downs BP at around 8.30am, which gave me just 90min to do 140km on dirt.
Not do-able for me (but maybe by Toby Price!).
Roxby was my back-up finish (at 1,700km), for a SS1600, so with that achieved, there was no point even considering the run to the Lake.
Somewhat happy but a little disappointed at the same time, I rang Jenn with an update and started heading homeward. 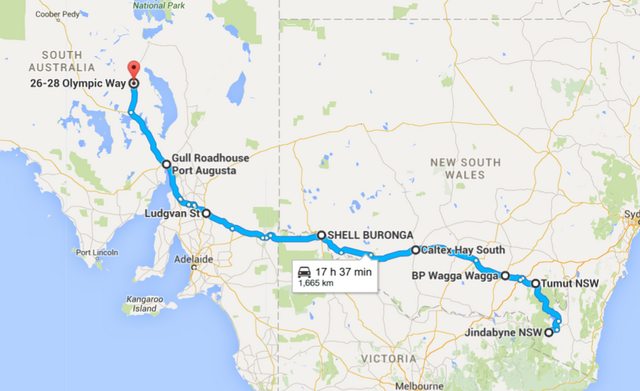 I think I got the planning right.
The execution was almost there, but one cannot always allow for the surprises that mother-nature gives us,
or the impact of fatigue.
Sorry there weren’t more photos from the ride itself.... I was busy!

Further correspondence with Mike Kneebone saw him offer to write the certificate, and I asked him to not call it “Heaven to Hell” yet, as I wanted to complete the whole ride as planned. The wording he did write was very pleasing none the less.

Thank you for reading my account. I enjoyed the ride and re-visiting for the report. 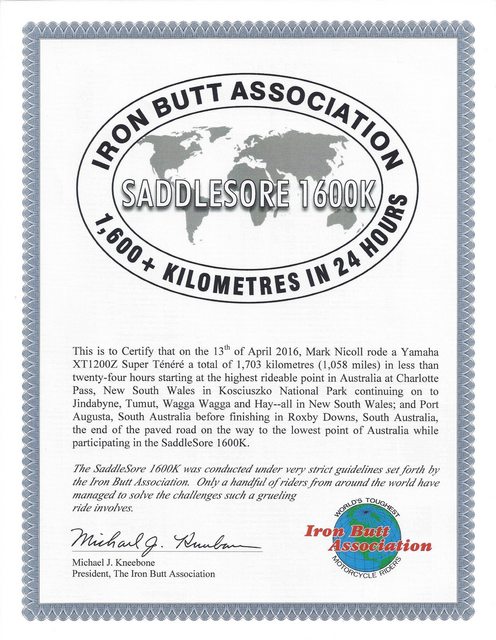 #3
Great effort Nico, well done on the SS1600K. Heaven to Hell...I think a ride like this attempt has been on the mind of a number of riders for a while now, so it is fantastic to see it put out there now.

#4
You gave it a good go Nico, if not for the roos you most likely would have nailed it.

Another enjoyable read from you.

Well done on the concept for the ride.

Premier Member
IBA Member
#5
So near but so far Nico. Still a great effort in achieving the SS1600 under pretty hard circumstances. Hopefully you can nail the Heaven to Hell ride on your next attempt. Thanks for the report.

Premier Member
#6
Thank you Nico for sharing your experience and ride report. Loved the 'sunset' photo!
Not an easy ride with some extremes in riding conditions.
Well done and congratulations on the certificate, there is always another time to finish the Bugger off.

TJ - I decided to post my report, because I discovered that my secret was out, and that other riders were thinking about it, and in one's case researching/preparing for such a ride. If my information can help someone else, that's gotta be good.

And Karl - it certainly was more like a 2,000km attempt. If it wasn't for the roos and my bodies need for more sleep than I had expected, I may have done it.
PS:

Skidoo said:
Loved the 'sunset' photo!
Click to expand...
It was a sunrise...

Premier Member
IBR Finisher
#8
What a great ride Nico, good luck in knocking this one off if you try it again. Thanks for posting the report it was a great read.
I will have to remember this one and try it myself.

Premier Member
#9
Top ride Nico. All the best for the next attempt....hmmm do you want company?

#10
Just catching up here Nico and I only just found this report. A great effort. Very glad you put it up. Congrats on the SS1600. It's a difficult ride. I hope to do it one day if I can get the Super Tenere withing cooee of it without crashing, burning clutches or having bits fall off it. Good luck on your next attempt.

Premier Member
#11
Well I won't give it a crack until you've had another go Nice, well done!

Can you tell us how you were going to document Lake Eyre South?

#12
Fabulous ride Nico!! and it's the quality of the pics taken not the quantity

#14
Rusjel said:
Can you tell us how you were going to document Lake Eyre South?
Click to expand...
Sorry Russ, I missed this the first time round.
According to Mike Kneebone, if a docket and witness are not available on site, your SPOT location is
sufficient nowadays to document your position. Especially if it is part of your SPOT track that ties in with
the rest of your data.

#15
Nico said:
Sorry Russ, I missed this the first time round.
According to Mike Kneebone, if a docket and witness are not available on site, your SPOT location is
sufficient nowadays to document your position. Especially if it is part of your SPOT track that ties in with
the rest of your data.
Click to expand...
Rusjel said: ↑
I had the experience a few years ago of arriving at a town I'd researched in remote South Australia which a phone call confirmed had 24 hr fuel,but when I got there had no power for the pumps or the receipt.

I never bothered to follow that one up, but getting a photo, spot track and throwing myself on the mercy of the admins would have been my only options?

Ira said:
Probably, unless there was some other place to obtain a receipt.

I should mention that a single missing or bad receipt, as long as it's not the start or end receipt, is generally not fatal as long as the rest of your documentation supports your ride claim. The disclaimer is that ultimately it's up to the verification team to make the call, so there may be cases where this is not the case.

Ira's comment about the disclaimer is important. Obtaining an "end" docket as close as possible to Lake Eyre (I am not sure where that would be) and a witness signature at the same time would assist the verification team along with the rest of your receipts for the ride. The requirements for a start and end receipt for rides form part of the rules for rides, however should you wish to attempt a ride where that is not possible (like this one) may I suggest contacting (like Nico has done) the IBA first. Spot locations are only used to supplement the requirement for dockets. Is there a sign at Lake Eyre that a photograph could be taken at along with a photograph of your GPS Screen? maybe these would also assist the verification team

#16
tj189 said:
... Obtaining an "end" docket as close as possible to Lake Eyre (I am not sure where that would be) and a witness signature at the same time would assist the verification team along with the rest of your receipts for the ride. The requirements for a start and end receipt for rides form part of the rules for rides, however should you wish to attempt a ride where that is not possible (like this one) may I suggest contacting (like Nico has done) the IBA first. Spot locations are only used to supplement the requirement for dockets. Is there a sign at Lake Eyre that a photograph could be taken at along with a photograph of your GPS Screen? maybe these would also assist the verification team
Click to expand...
For this one, nearest dockets available (and witnesses) would be either Roxby Downs or Marree.
If you are lucky, you might even get a witness on site if there is someone there at the lake!
During my research there last year there were a few others at the viewing point at Lake Eyre South at the time, I also grabbed a screen shot from the GPS with a - (minus) elevation reading, which I'm sure would support your efforts.

#17
Great follow up Nico thank you for that, I look forward to seeing you complete this one.
T

IBR Finisher
#18
good one Nico.. when is the rerun?

Premier Member
#19
Thanks Nico, I just read this again for research purposes. I know the ride has been done now, but are you still planning to have another crack at it? I think I'd like to next year some time

#20
I always planned to have another go at this one Russ, but unfortunately my body is telling me that it likely won't be happening.
It seems a long time ago now. Last year was a big one ... still paying the ferryman.
As you have successfully done the Dusty Butt, you should eat this one for breakfast!
At 1,850km the timing is critical, as is the necessary daylight sections, and caution needed along the Goyder Kangaroo Korridor.
Good luck when you have a crack!
You must log in or register to reply here.
Share: Facebook Twitter Reddit Pinterest Tumblr WhatsApp Email Link