Premier Member
IBR Finisher
#1
Its been too hot.

Its been too rainy and flooded.

Its too windy out there.

I was talking with my wife about why I haven't been out riding much lately.... I said I might wait until the conditions get better.

"Iron Butt?" she said. "Iron Butt Association - the World's Toughest Riders?". This was said with more than a touch of sarcasm directed at me sitting watching telly on Thursday night with the aircon turned on, slippers on my feet and the volume up loud to get over the din of the wind and rain outside:

"Why don't you just GET OUT THERE and ride YA BIG CHICKEN!"

"Get up and ride ya big chicken".

I grabbed the first bike keys I could find, a tank bag to fit, put my waterproof KLIM suit on, but left the zipper half way down - hidden under those velcro sticky things - and headed out the door. I logged a docket at my local servo at 04:50am and headed south into the howling wind and rain and caught the edge of the commuters as they joined the zombie throng down the freeway toward Sydney.

Through Sydney and southbound it was actually pretty cold. Its supposed to be summer or something. Must be the rain. I was getting a bit damp, too. I remember Wombattle mentioning his same same KLIM Latitude did let water through in a terrible downpour on the New Zealand ride that he and Skidoooo rode a while back. Looks like mine has failed too, I thought, but it was pretty bad out there. I stopped at Sally's Corner just as it stopped raining and even had a hot coffee. A rare event for me on a ride, I'm more your 'Dare' iced coffee type when on the clock.

, then rolled around the corner for a pic:

Then headed off down the Hume. I pulled in to grab a pic at the submarine town and just ended up with this lame one:

Then I thought I'd pull in to Albury, but it was just mini city traffic so I brushed past the station and left.

And kept on heading south. I pulled in to Benalla having quietly been listening to my 2 GPSs fighting, grabbed a docket and headed off the freeway. I made my way down past Lake Nillahcootie. Cute name for a big muddy puddle as it currently appears.

From there it was a swing to the east and up to the top of Mt Buller.

I'd never been up there before.

A great road as all of these places are and an empty one too. They must have seen me coming and made me feel very welcome.

Then it was back down the hill and via Bonnie Doon, just to say the name out loud, then back through Benalla before heading west. I bought a map at the servo in Benalla to stop the bickering and found a quiet road heading where i wanted to go, but without big towns to deal with like Shepparton. A nice and empty country farming road took me past

I pulled in to Bendigo just before dark. Hung around the servo waiting for that light to fade properly and had a feet-up nap to pass the time.
Down south and through Daylesford I stopped. Not for a latte or anything of the trendy Daylesford fare, but rather to pull my bike apart to find out why my big spots weren't working. I like my spots. I'm used to my spots. I had my little spots working ok, but gee I was missing my BIG SPOTS

I think it is the switch for the BIG four, but that will have to wait. At Creswick (I think) I disconnected one big one, one small one and did the old wire switcharoo and though they looked wonky, they still lit up the world like that. There had been roos about. Lots of roos and little narrow roads. STraight east from here to the closed little town of Kyneton.

Then back west into the roos, though on a different road. Crossing up over the Calder freeway near Woodend I hit one. On top of the freeway overpass of all places..... I'd taken the opportunity of all of the street lighting there to sneak my left index finger in through the visor to adjust my glasses when 'BANG-wobble-wobble-wobble' I hit a wallaby that shot out from the freeway slip road without giving way to its' right. It was a hard hit, contact with both boots and it seemed to roll around for a bit maybe tangled up in the belly pan or something. I don't know. I was busy one- arm bench pressing the bars, just glad I didn't poke out my eye with the other hand. Dead and removed from the road the little fella didn't feel much I hope. Its a Tenere, so apart from a tuft of hair stuck in a little crack on the front guard, all it needed was a couple of fuel tanks topped up from the nearby petrol station and kept going, the roll of gaffer tape in my pannier was left weeping, nay sobbing, through lack of use.

I headed north on the Calder through this little place:

It sure was quiet. Apart from one car near Bendigo, I went the nearly 400km to Ouyen without overtaking, being overtaken or even seeing a vehicle heading my way. Weird. Anyway I had a nap and a freshen up at an IBA motel at Ouyen to allow the sun to be out of my eyes. I'd be heading east from Mildura. I picked up a pic before the turn:

Soon after I took a call on the road. Now this fandangled newish GPS is clever how it Bluetooths to my phone - its a Samsung. The last time I tried that sort of caper was on the Australia Southern Cross GOLD ride. Classic ride and lots of fun, that one, but every time Clint (he and Charleen came out in the middle of the night - legends

- to be witnesses) every time he called my Apple shut down my Zumo. Later that same night Crackers called me at some mad hour taking a tea break while locking up some crazies and it did the same thing, the Apple froze the GPS. With another 13,000 or so kilometres on that ride to go and I was emergency stopping in the middle of nowhere if the phone rang. I disconnected the Bluetooth for a few years.
This time around it works just fine with the Zumo 590LM and the Samsung, but not too well when TigerBill called me. I'd just filled up at the Shell at Buronga that I always knew as the BP at Gol Gol, and settling in to the 110s I heard a bloke over a crackly line say something about seeing me a minute ago at the servo. I couldn't really make out what or why he was calling and in the end he said he would call back later I said "Who is this?" "Its Bill".

It was a bad line and I was very confused how TigerBill had seen me at a servo about 1300km from home. He's since explained and its sorted.


A few minutes later I pulled up in the FarRider town of Euston the morning now a glorious blue without a cloud.

There I was just looking forward to a gratuitous Kimmie Shot:

And then a few hours of quality time, just two LD enthusiast mates

I topped up in West Wyalong and was well and truly into the heat. There was a bit of traffic from here, but since there'd been none to speak of for the previous thousand kms I was ok with that. A bit further north - almost to Skidoooo Town - and despite the return of the GPS bickering, I turned south east at Tomingley and had a great time through there. The road reminds me of one of the short cuts to Coolah near TigerBill's farm and just bounces along happily over hill and dale. I turned south at Yeoval

And through a few little towns

And then I was back at the Dog on the Tuckerbox servo at Gundagai, where I'd left nearly 36 hours and over 2500km before.

All that was left was the 500km commute home. Nobody around on the Hume, a no-touch pass through Sydney and me all at one with the road. I felt so good, I daydreamed (mmmm, it was night... maybe it was a microsleep) I daydreamed that I felt as comfy on that big Tenere as Greg Rice always seems in his avatar pic

When I arrived home my wife asked "Did you ride your big chicken?" 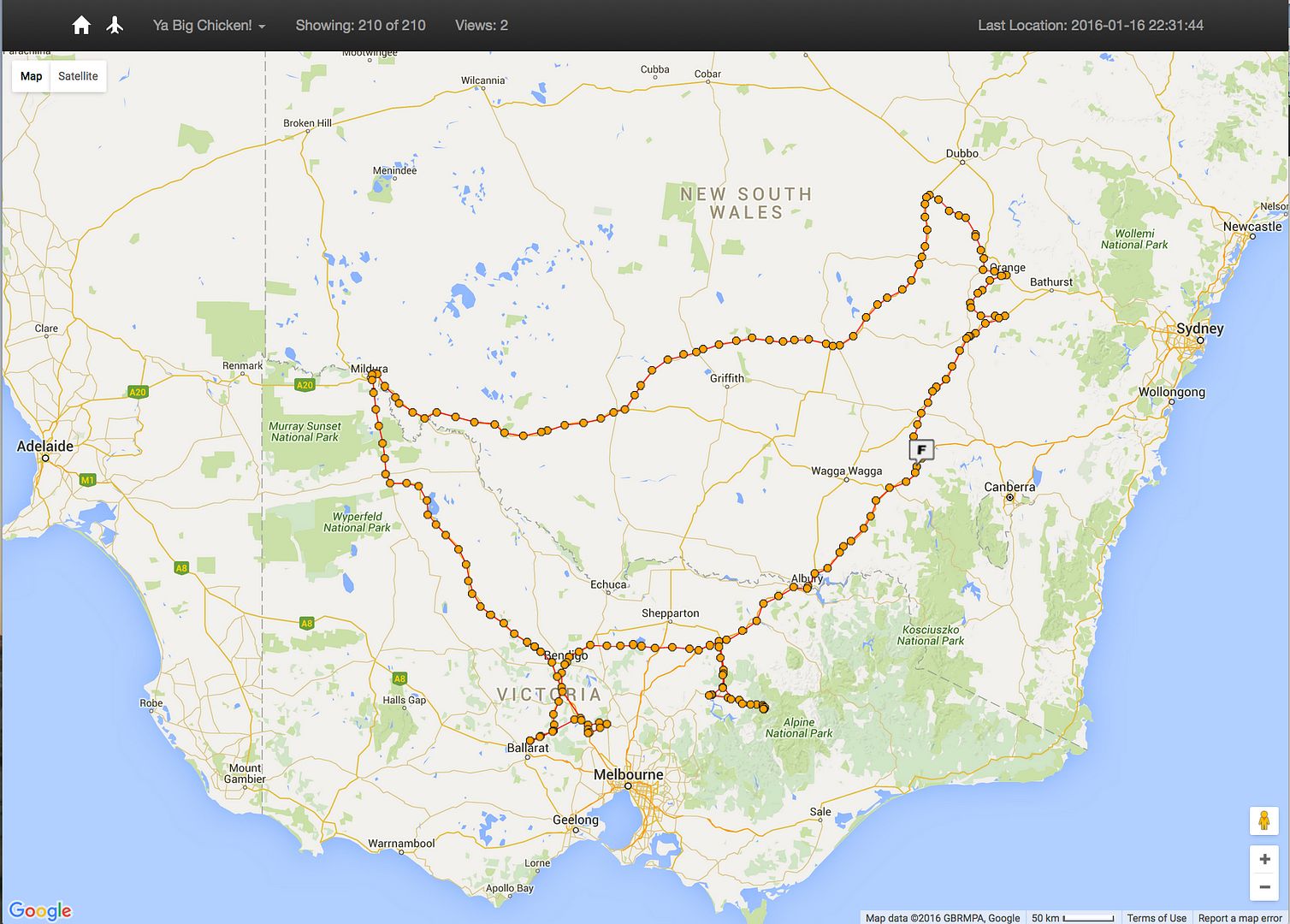 Premier Member
#3
A great read, nice crayon your drawing with.

#4
Another great ride and ride report Ox, all that bench pressing did help.

#5
Yep, the one armed bench press gave me a cackle too. Great report there Peter, you are turning into a real animal when you ride

Premier Member
#6
How appropriate. Hogan's transport, a big "chook", riding a unicycle , with a cruiser in the background.

Premier Member
#7
"How appropriate. Hogan's transport, a big "chook", riding a unicycle , with a cruiser in the background."

Yeah- I thought that was a great shot.

I'm glad my wife doesn't kick me out in the cold and wet like that! With insults to boot!
Well drawn. And you found somewhere you hadn't been before- a bit of a stretch to believe.

#8
Great stuff Peter - has your wife stopped calling you a chicken?!

#9
Great Caricature, Peter! How many more have been planned out? Can you do people yet or in your case, parts of the anatomy?
Nah! Just kidding. No matter what you draw/plan, you still do some momentous riding. Well done!

Premier Member
#10
Really enjoyed the great read and pics to boot. A clever ride doing some serious mileage and it was nice to see some 'blue' sky. Love your themed rides Peter

Whats Next Signs of the Zodiac in corresponding Months

#12
Absolutely brilliant Ox. Loved the read and pics and the final map..

Some seriously good Australian roads there complete with wildlife to keep you on your toes.

#15
Well done Ox, I love reading your reports as they are so entertaining. Thanks for sharing your fun run with us

#16
As usual Ox a great read to go with a great ride. I'll bet SWMBO will be more selective with her words in the future..lol

Premier Member
#17
Haha, I love this idea, Ox. I remember the Ox you did (first one?) but have obviously missed others. Although I was just reading about a shark in the latest IBA mag. Great work on a little twist on the ride planning theme.
M