Redemption - Of Lows and Highs

Premier Member
#1
After having our arses handed to us on the Cape to Cape attempt earlier in the year (…for the second time) both Thommo and I felt the need to get some runs on the board, to prove to ourselves we could actually get something completed. I had been talking with Thommo on and off since August and he was keen for a go at the Heaven to Hell ride (or rather Hell to Heaven in this case). The ride from the lowest trafficable location in Australia to the highest is not one I have really given much thought to previously but after guiding Russ in for the last couple of hours on his ride last year I started to see the appeal. Besides the Hel to heaven concept seemed to align neatly with the personally redemptive purpose.
I bundied out of home about 5 on Saturday morning for the drone down the Hume. Despite the spirit crushing nature of the Hume as a whole, I actually don’t mind the run between Yass and Wagga and sunrise on the road is always a fine thing. 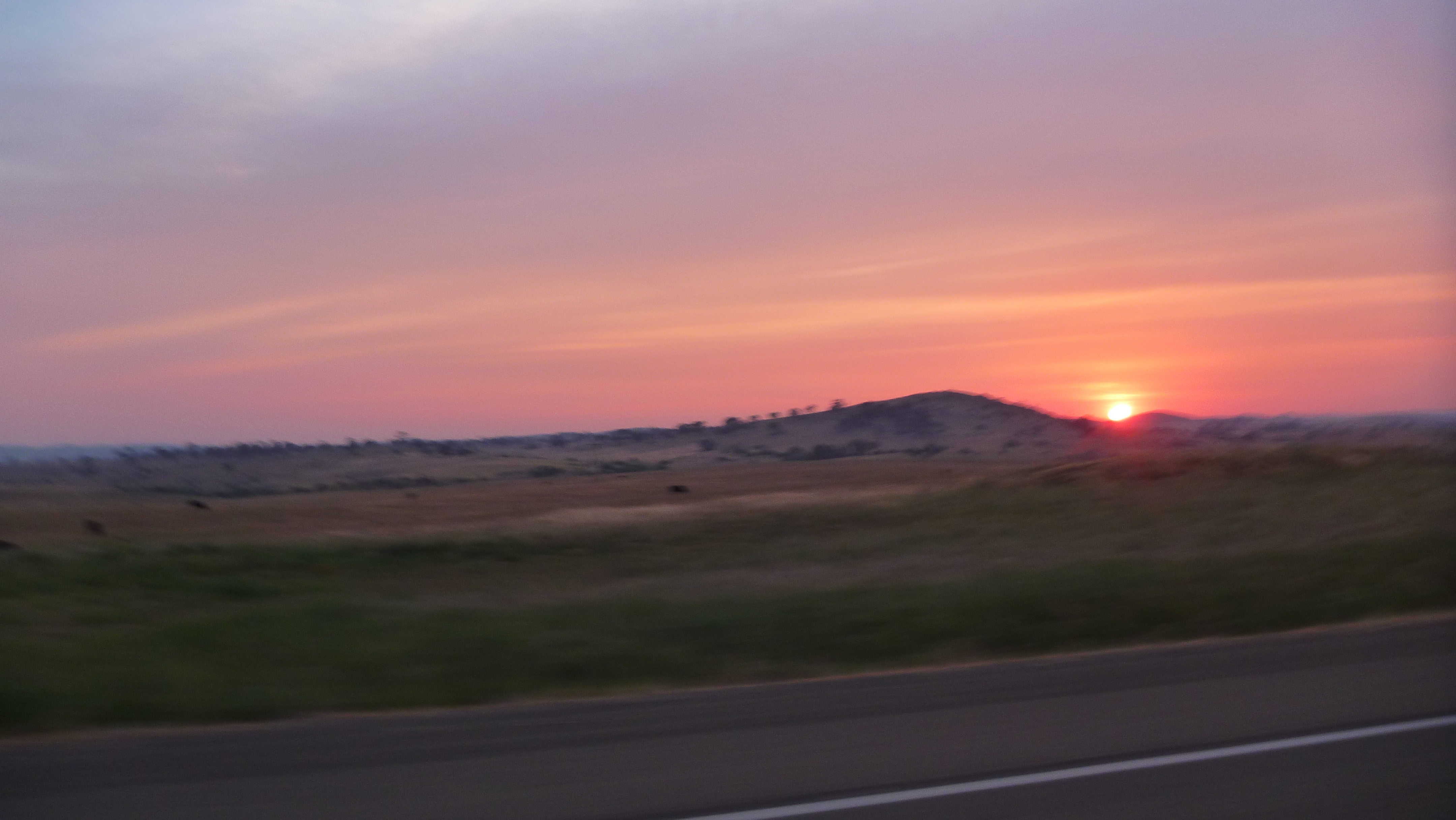 Through Wagga and out the other side, I’ve always liked the corridors of big eucalypts out this way and they have become the exit sign for some bigger rides for me over the years. 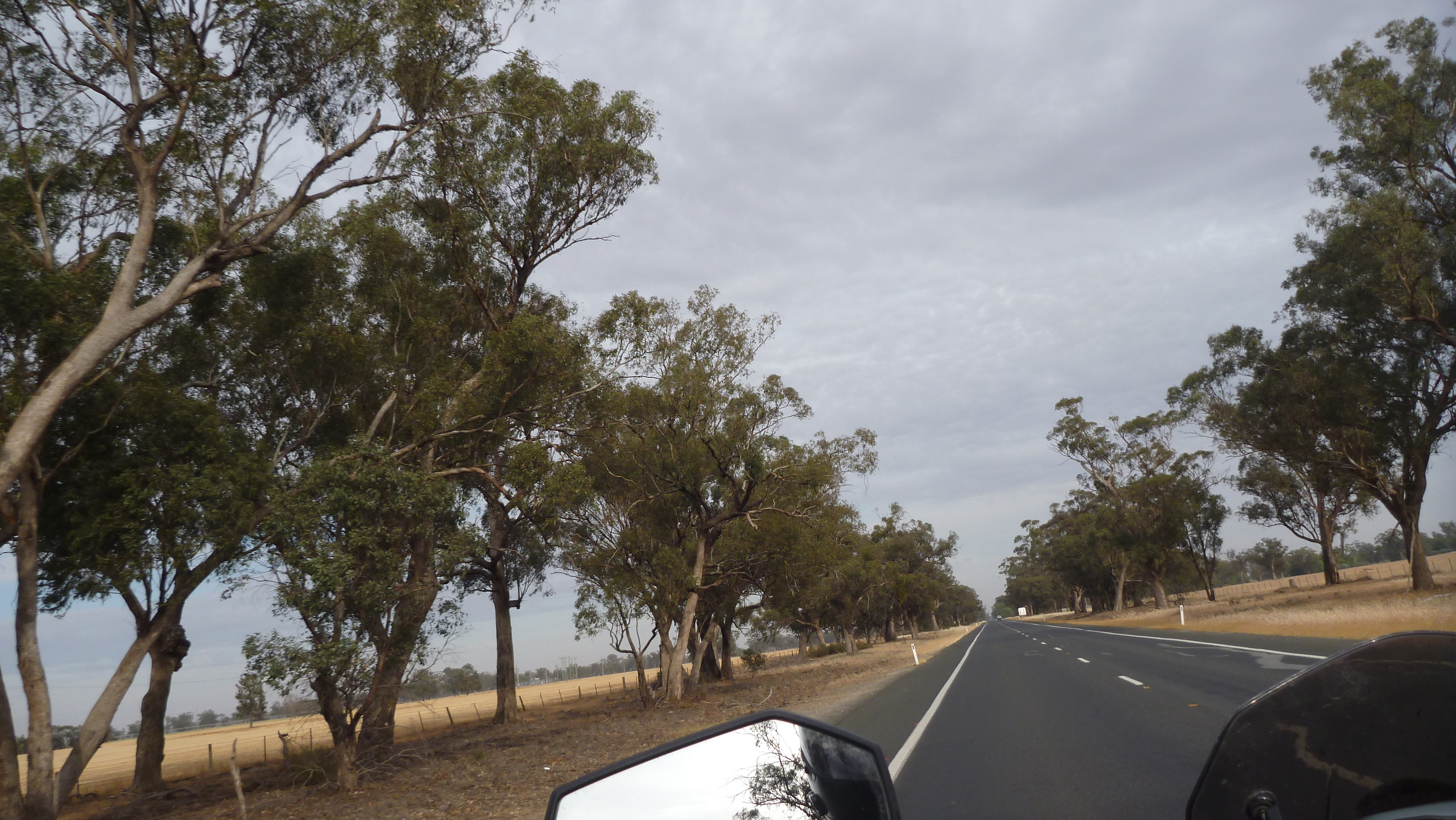 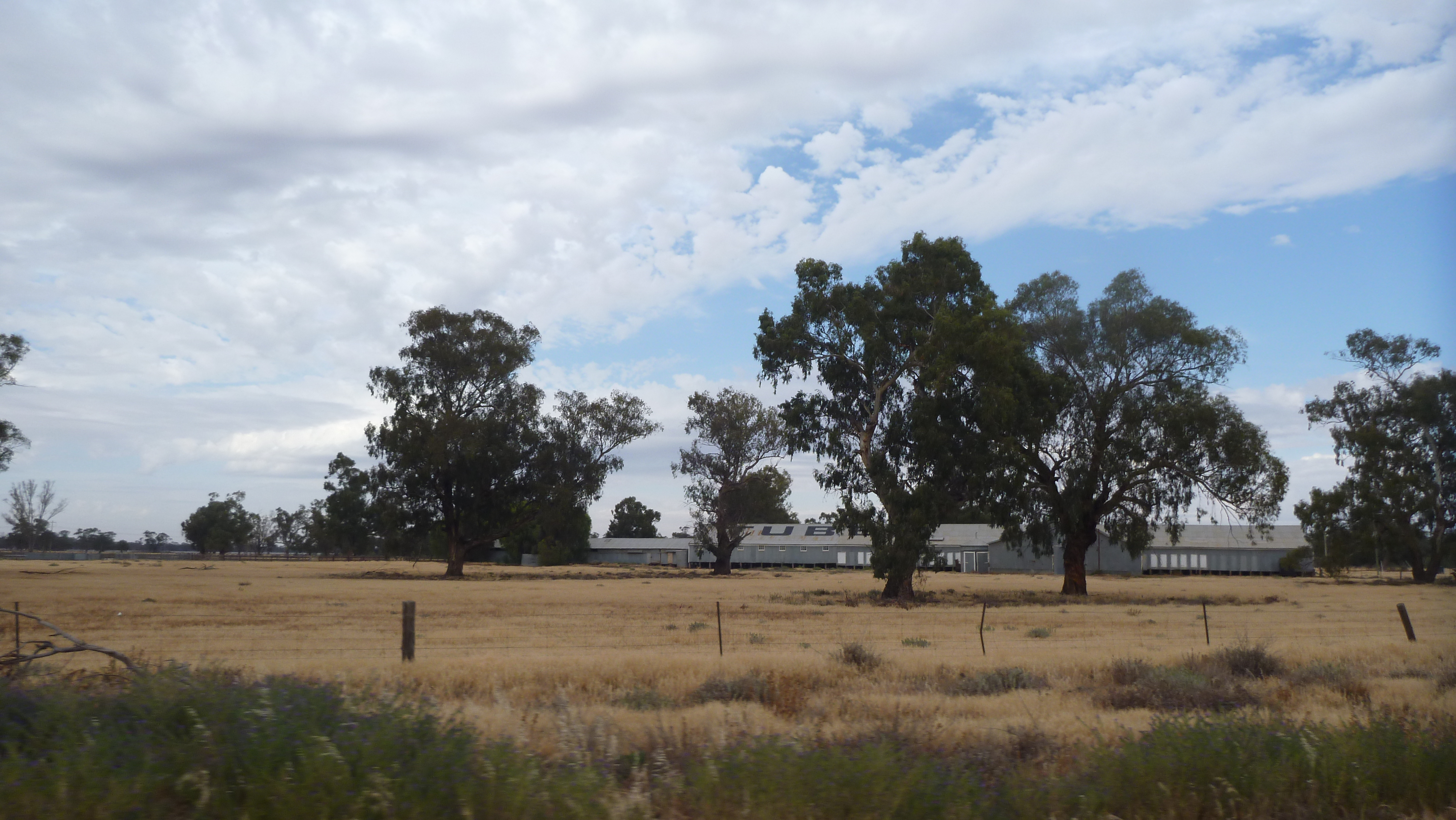 Good efficient run across the Hay plains to meet up with Thommo and Ron at Mildura by about 1330. Great to have a yarn with Ron about his double crossing and hear some of the stories.
After Ron made sure we were leaving town Thommo and I headed to Burra for the night. Never really used comms with other people on the bike before and was quite bizarre chatting most of the way. Not something for all the time, but an interesting change. 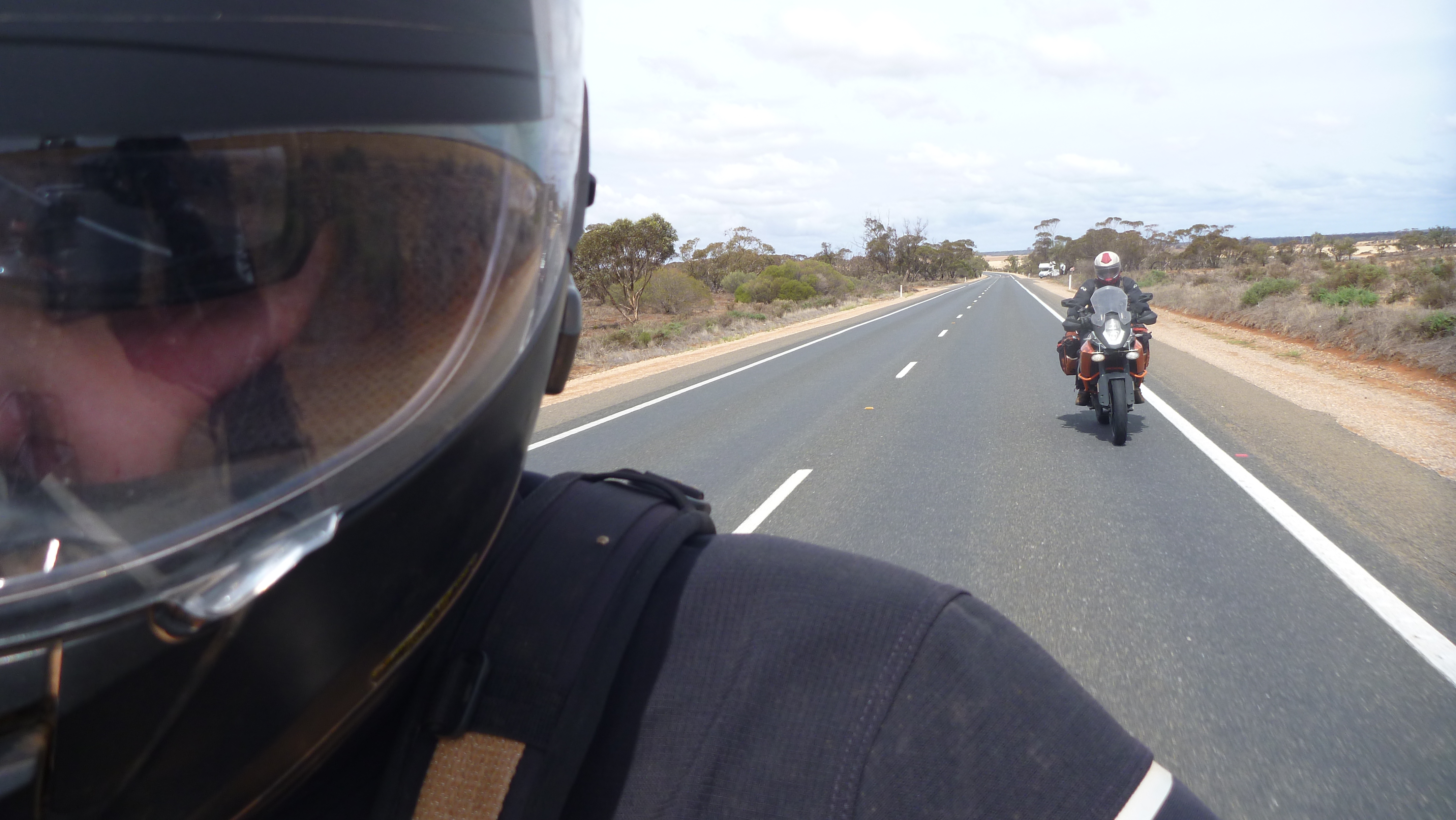 Not the flashes pub in Burra but we definitely made the right choice for our purposes, very quiet night for our establishment as the other two pubs had a (pretty average) band playing and an outdoor movie night.
Lazy start in the morning and a little poke around and then onto Jamestown for brekky. 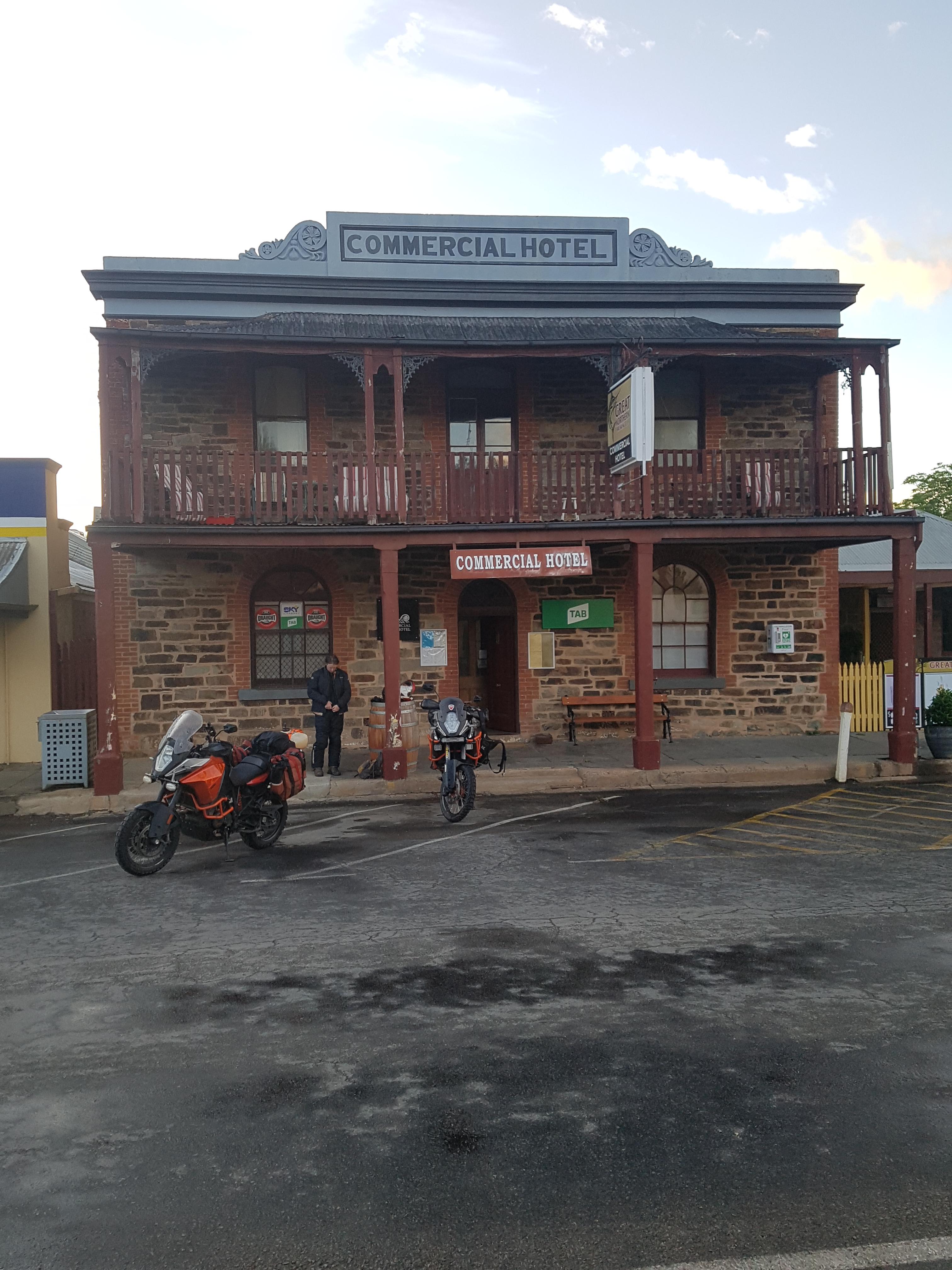 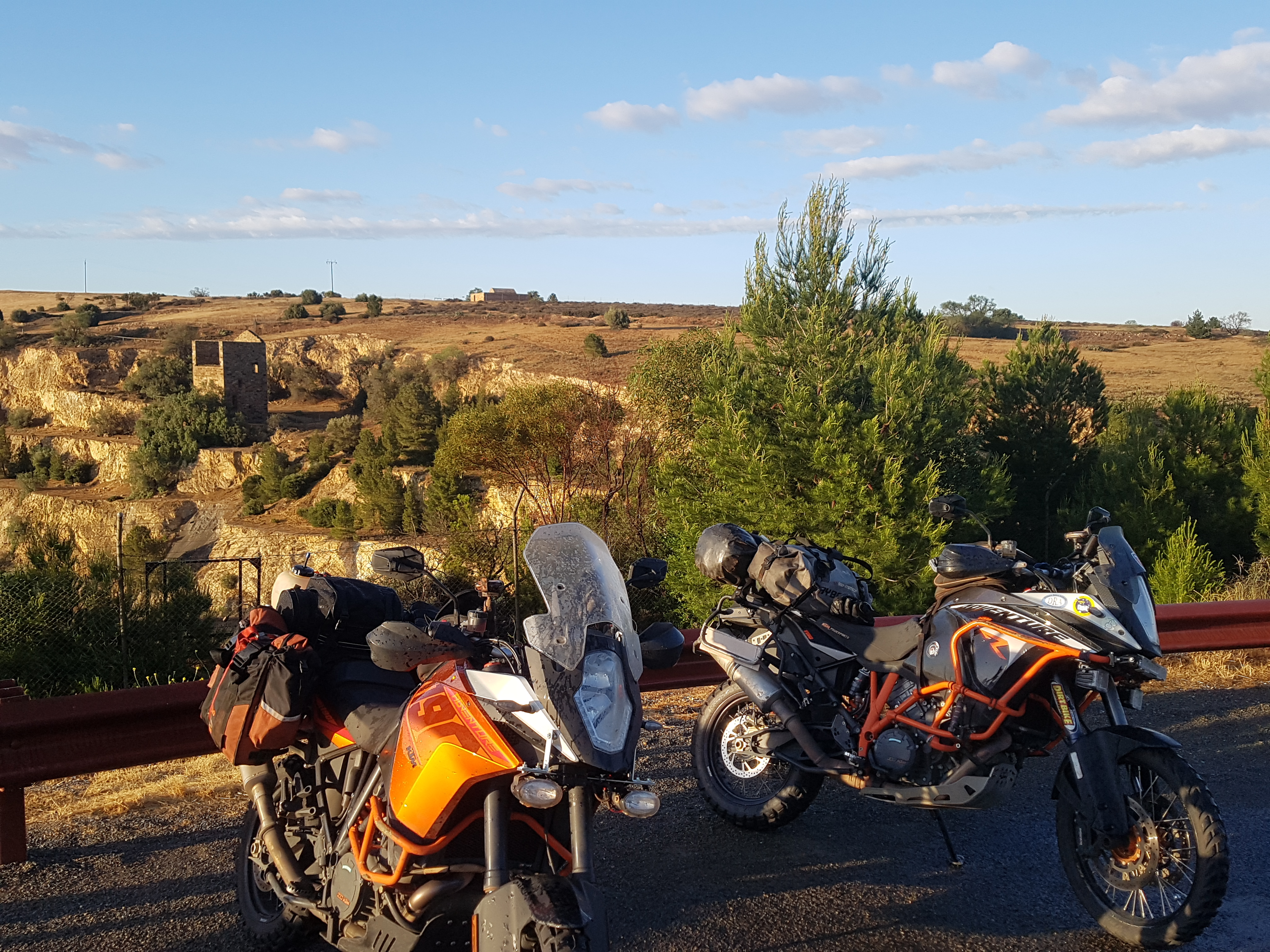 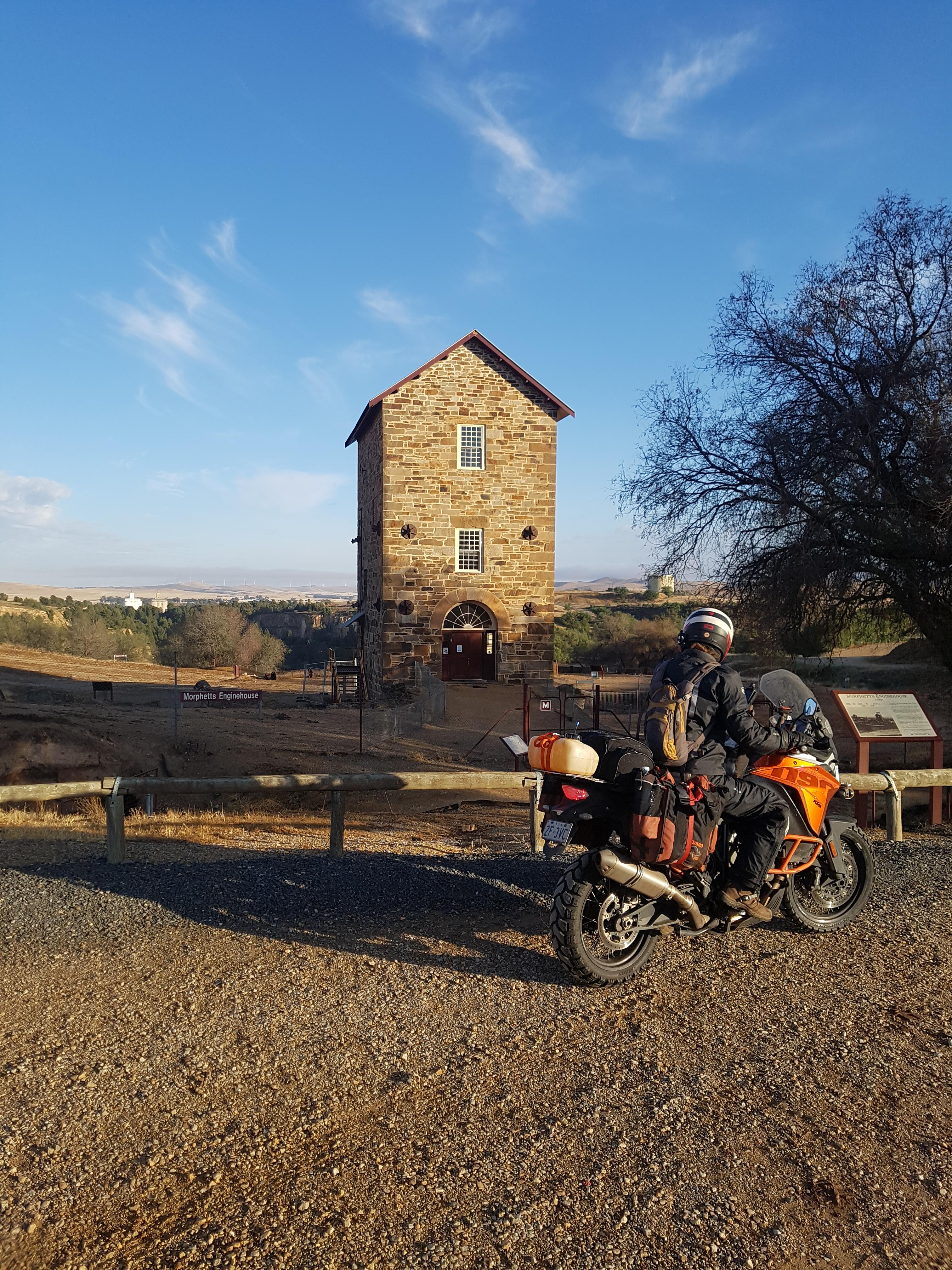 We had planned to check the fuel at Lyndhurst on the way up and a bloody good thing we did – No ULP available there any more! The fact that I didn’t have enough fuel to make it back to Leigh Creek was our immediate problem (solved with use of bladder I was carrying for this exact reason and Thommo running ahead) but that paled into insignificance against the fact it was going to cause problems for the run because Leigh Creek doesn’t open till 0830 which just wasn’t going to work for us. A little juggling with the plan and we realised we would need a fuel dump in Marree so we could get back to hawker, so with a spare jerry can purchased we finally manage to escape Lyndhurst for an easy run to Marree on the reasonably freshly sealed final 80 odd km. (enjoy it while you can, they haven’t done a great job…)

Into Marree and sort out fuel for the morning and then a beer or two at the pub to arrange access to ATM for receipt etc. Started chatting as you do and as soon as they asked where we’d been/were going they then said “Oh, you’re one of those guys!” Nice to not need to explain what we were doing and needed… 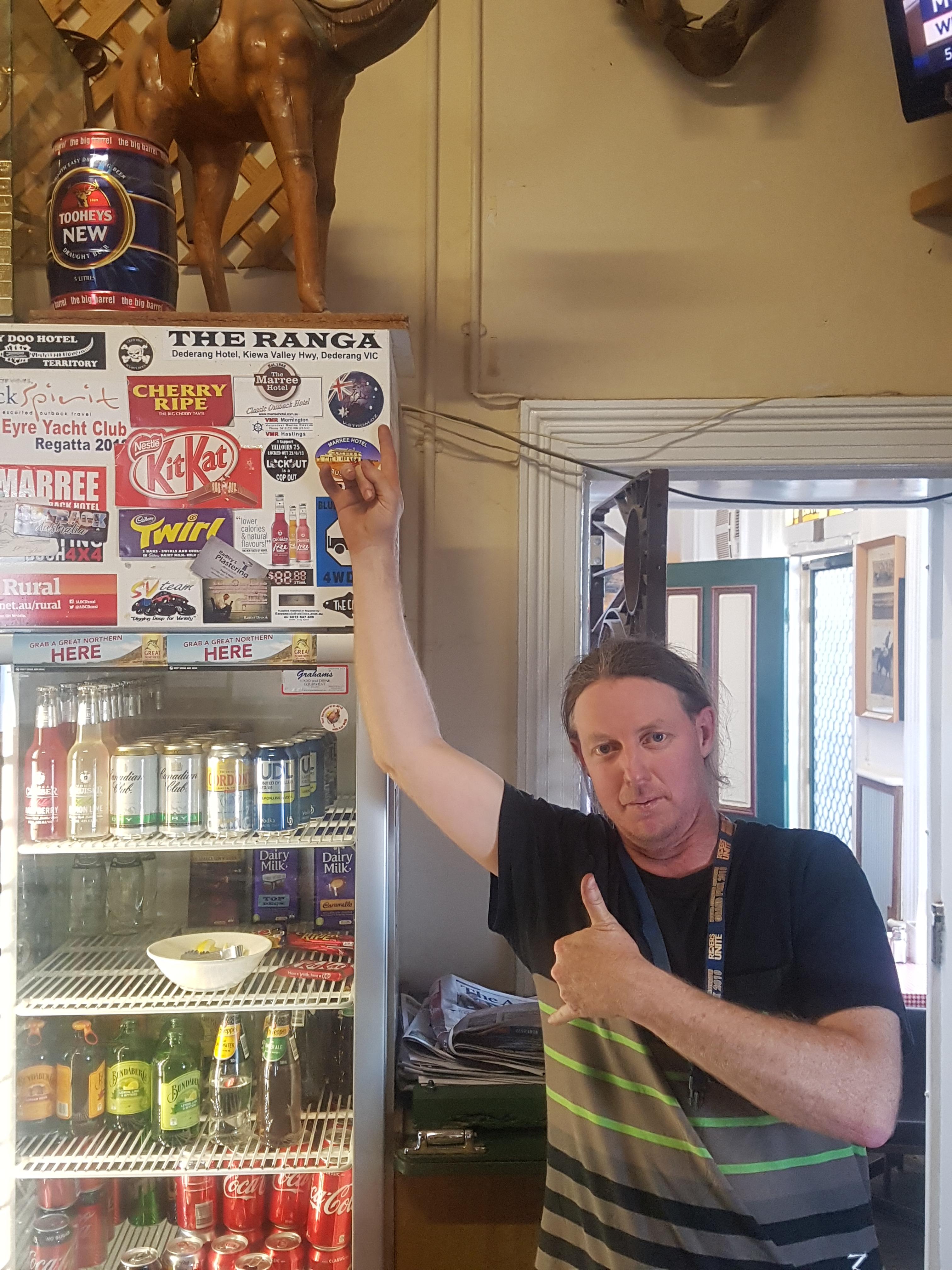 Out to Coward Springs Camp for the night. Thommo was making friends with the 1190 on the dirt for the first significant time. 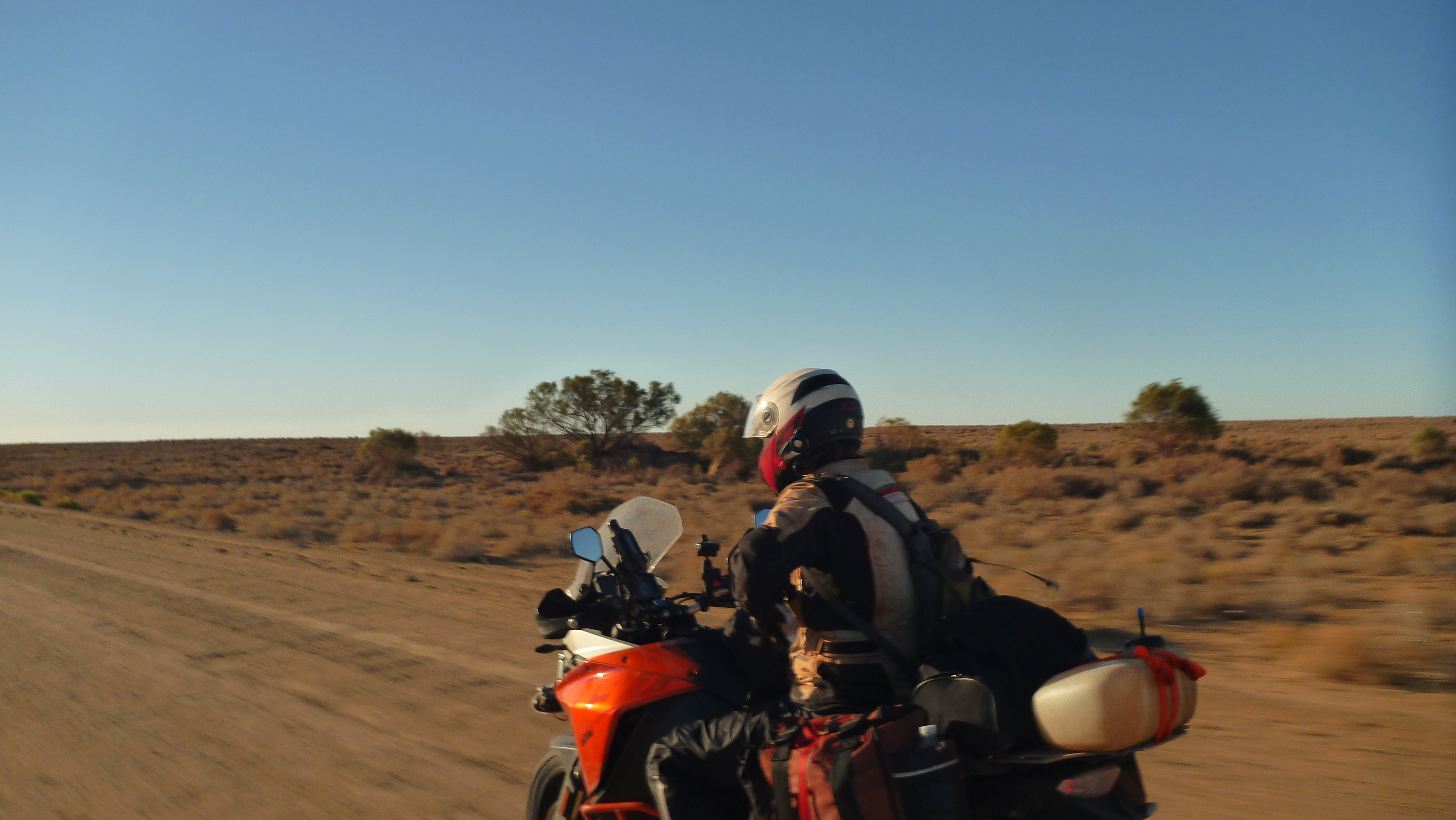 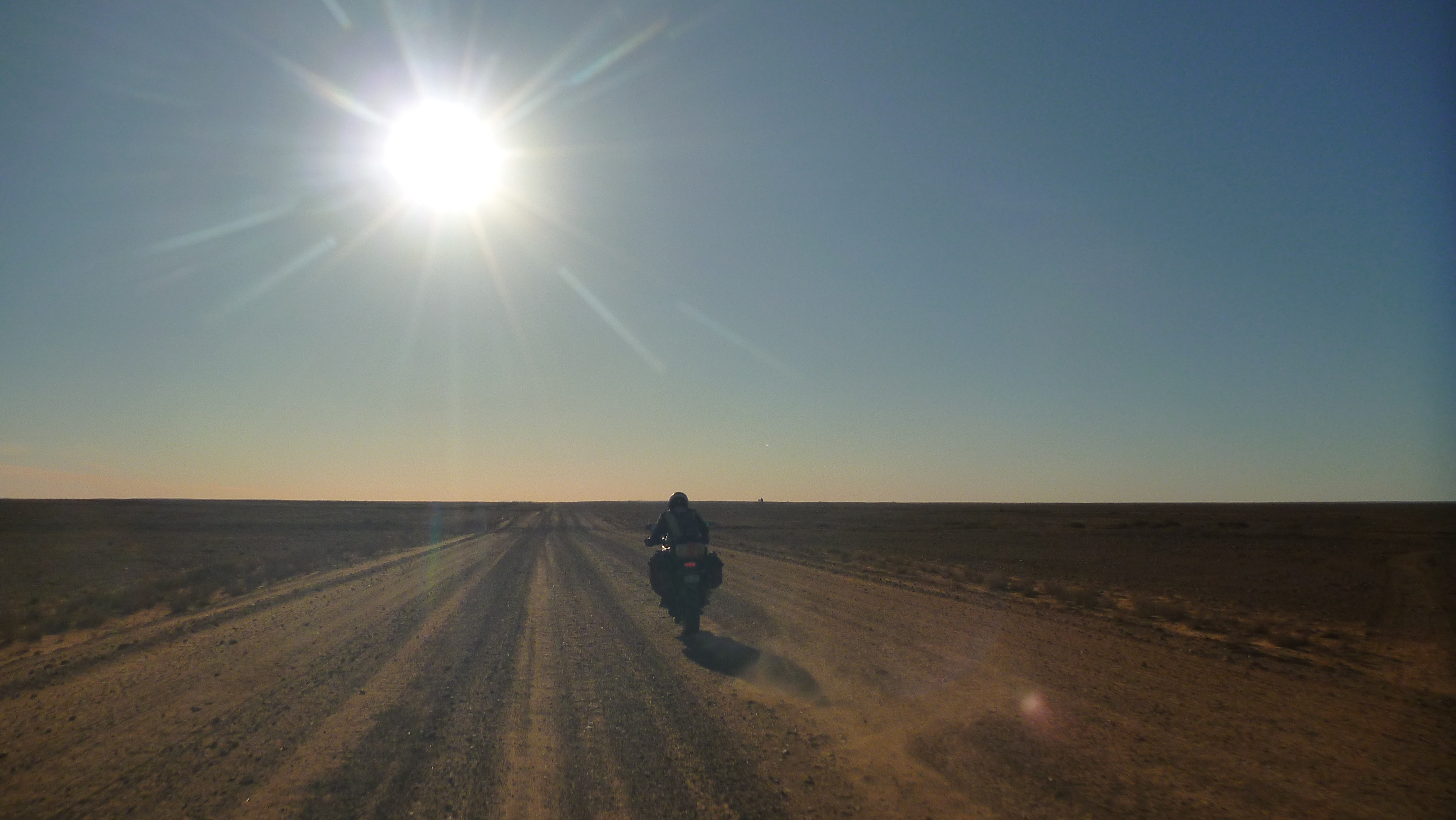 Nice to have the place to ourselves as there are somethings you just don’t need to expose the public to and a Ranga in a plunge pool/spa is one of them. 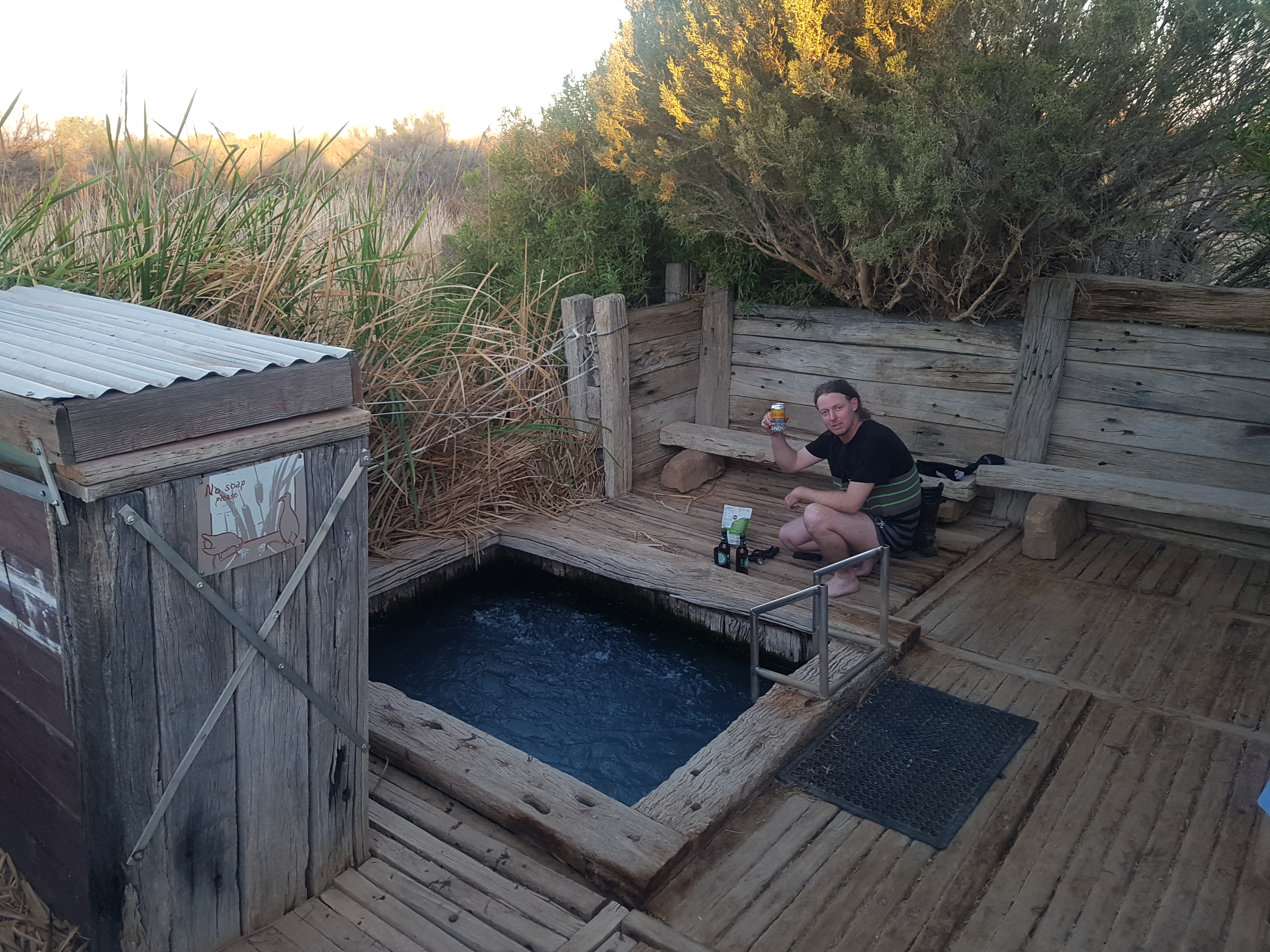 After donating a fair portion of our blood to the local insect population, we turned in early for a few hours before a 2am get up. Bit of a slower than planned start but got back down to the Kati Thanda-Lake Eyre viewing area ready to go at about 4am Eastern time (0330 local) 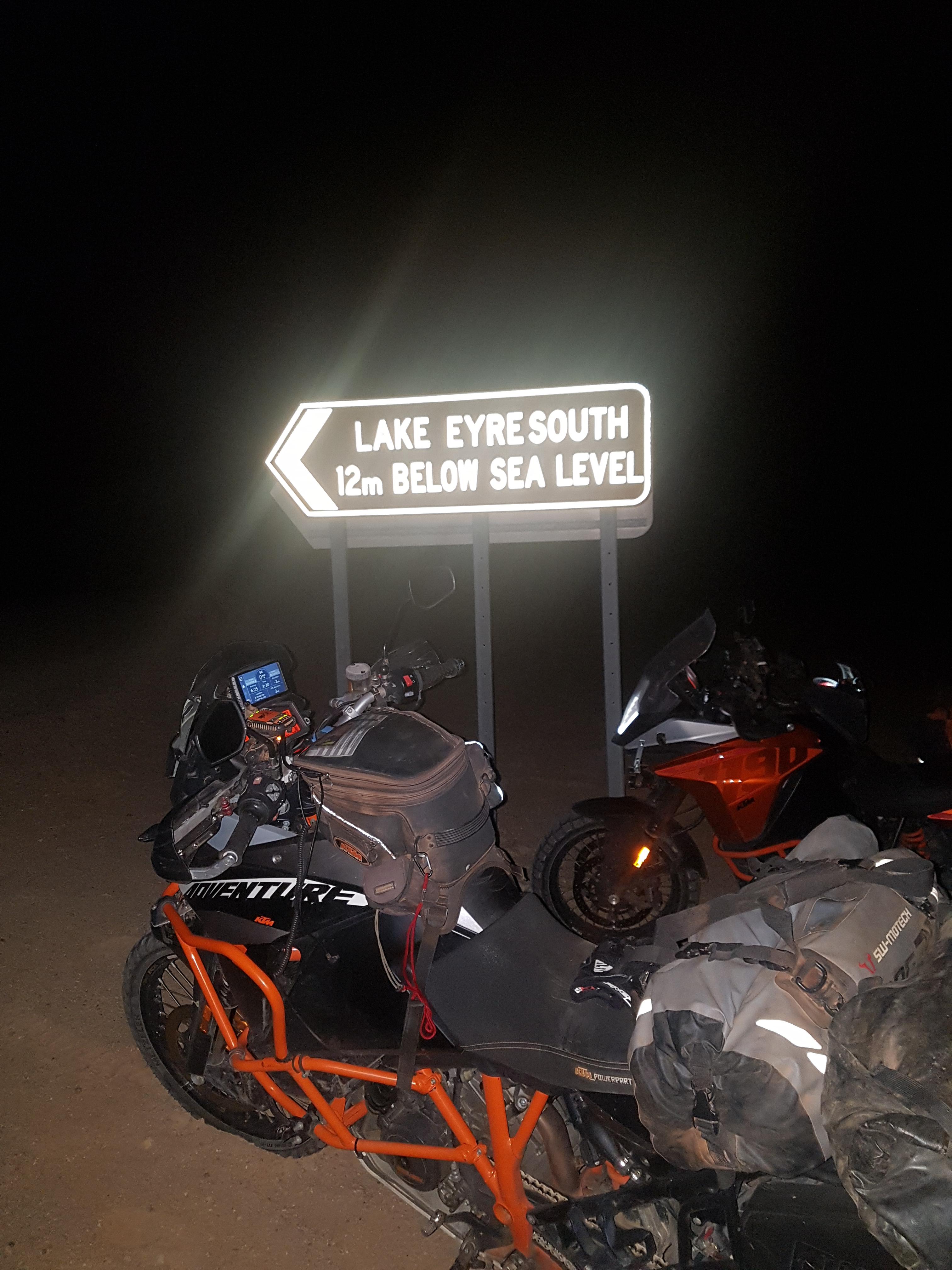 Then back to Marree to get receipt and dump in the extra 10L each. Bit of mucking around here saw a pretty inefficient stop and we pulled out a further 45min off plan but unconcerned as we knew there was fat built in later. 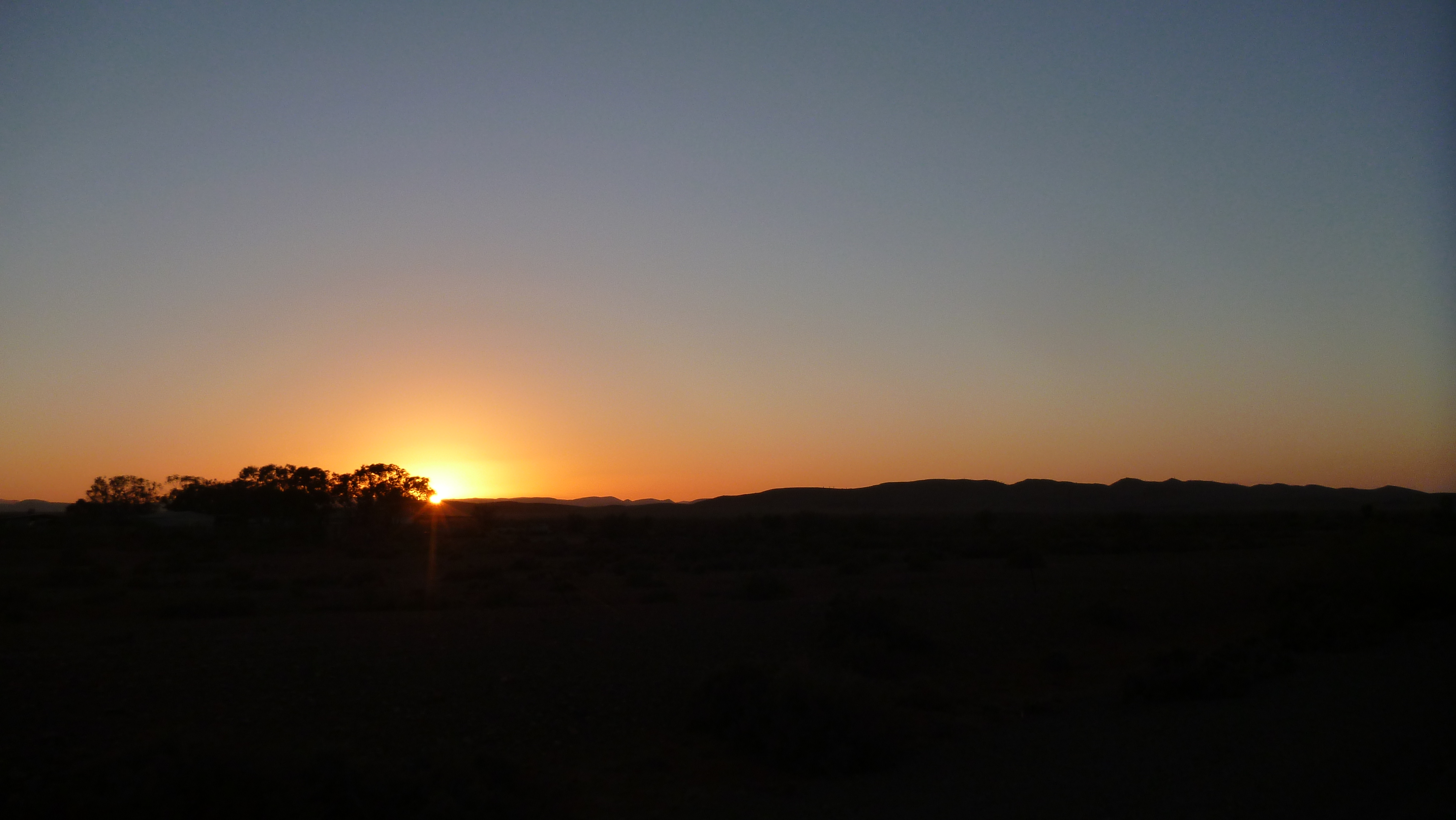 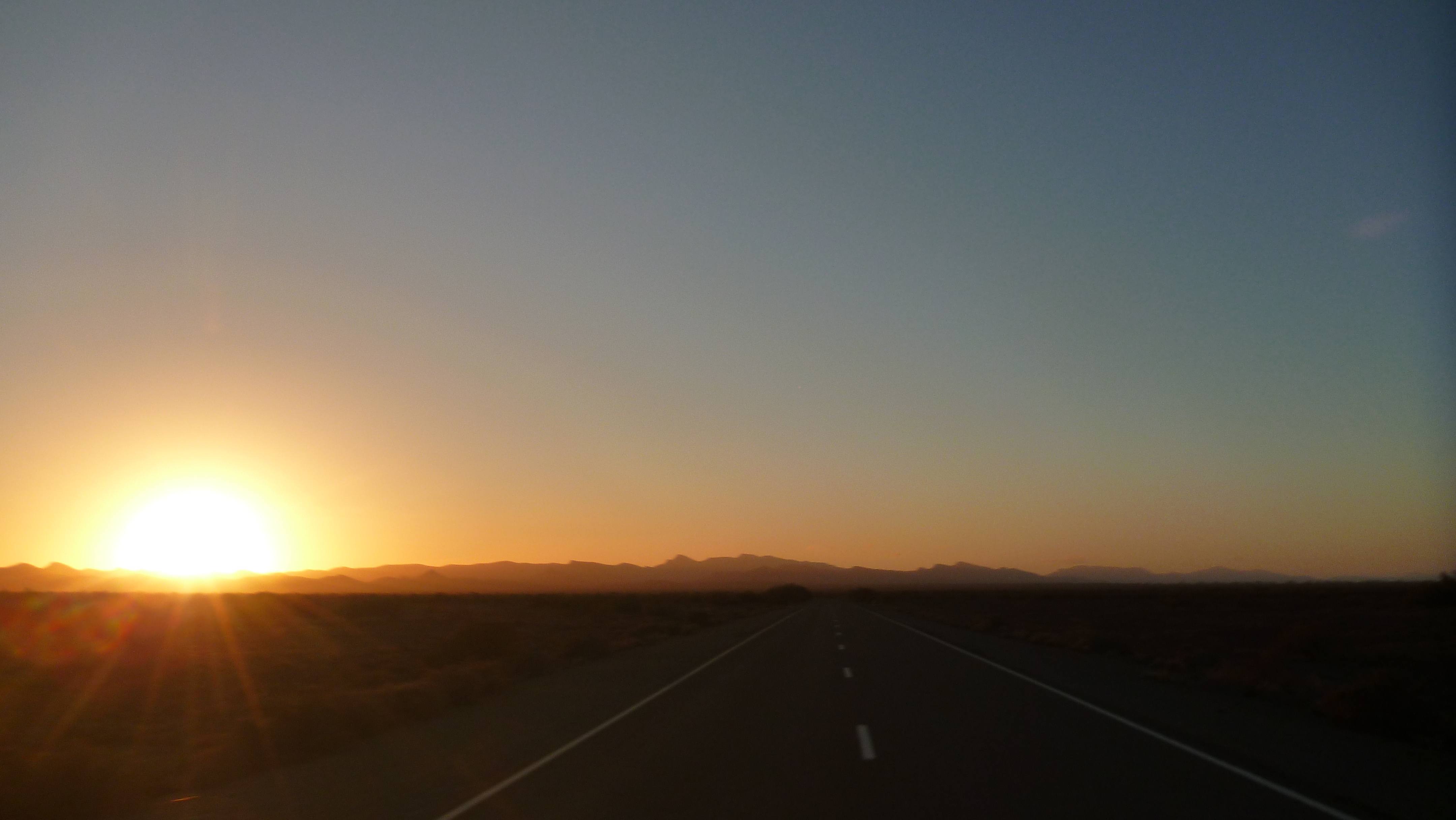 After sun up every sheep in the area (and there are many) needed to be on the other side of the road. Then in the places sheep had already crossed, roos were substituted for variety and then to stop things getting boring there were several Wedgies slow to lift off. We both ducked a couple.

Hawker for first fuel as the town was slowly waking then towards Burra again. Belting bloody cross wind making things pretty unpleasant. From there back to Mildura just in time for dust storms. 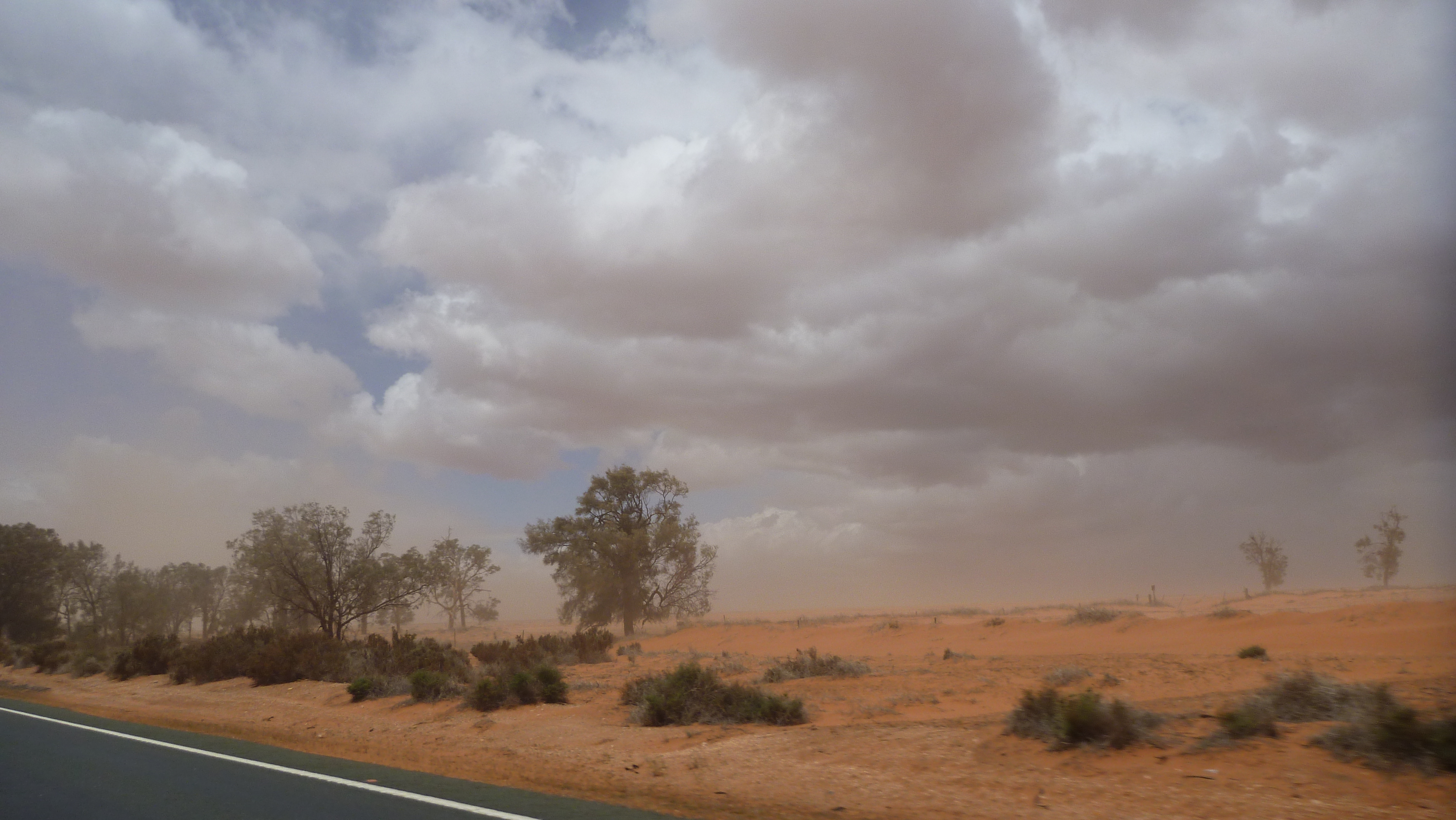 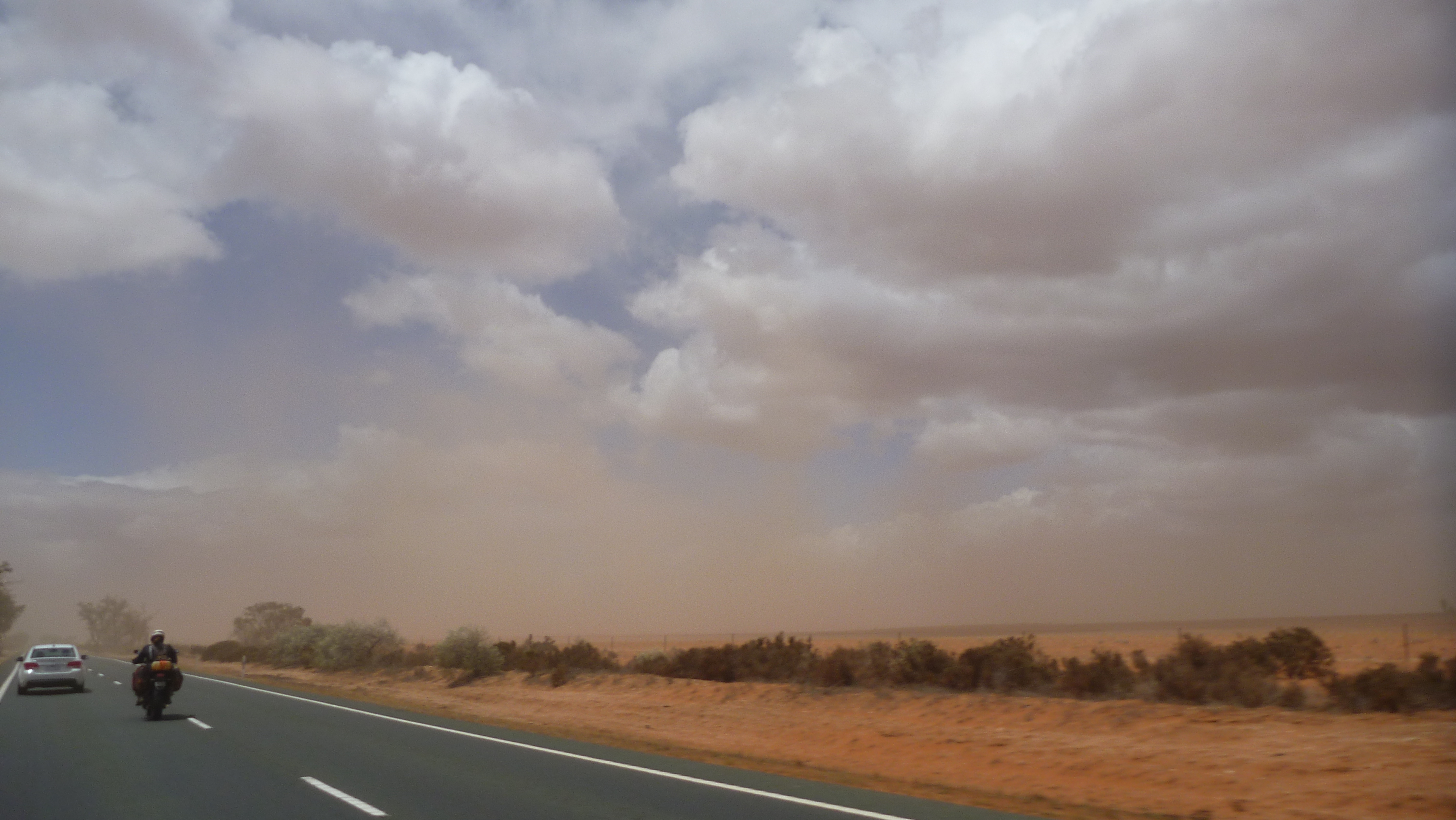 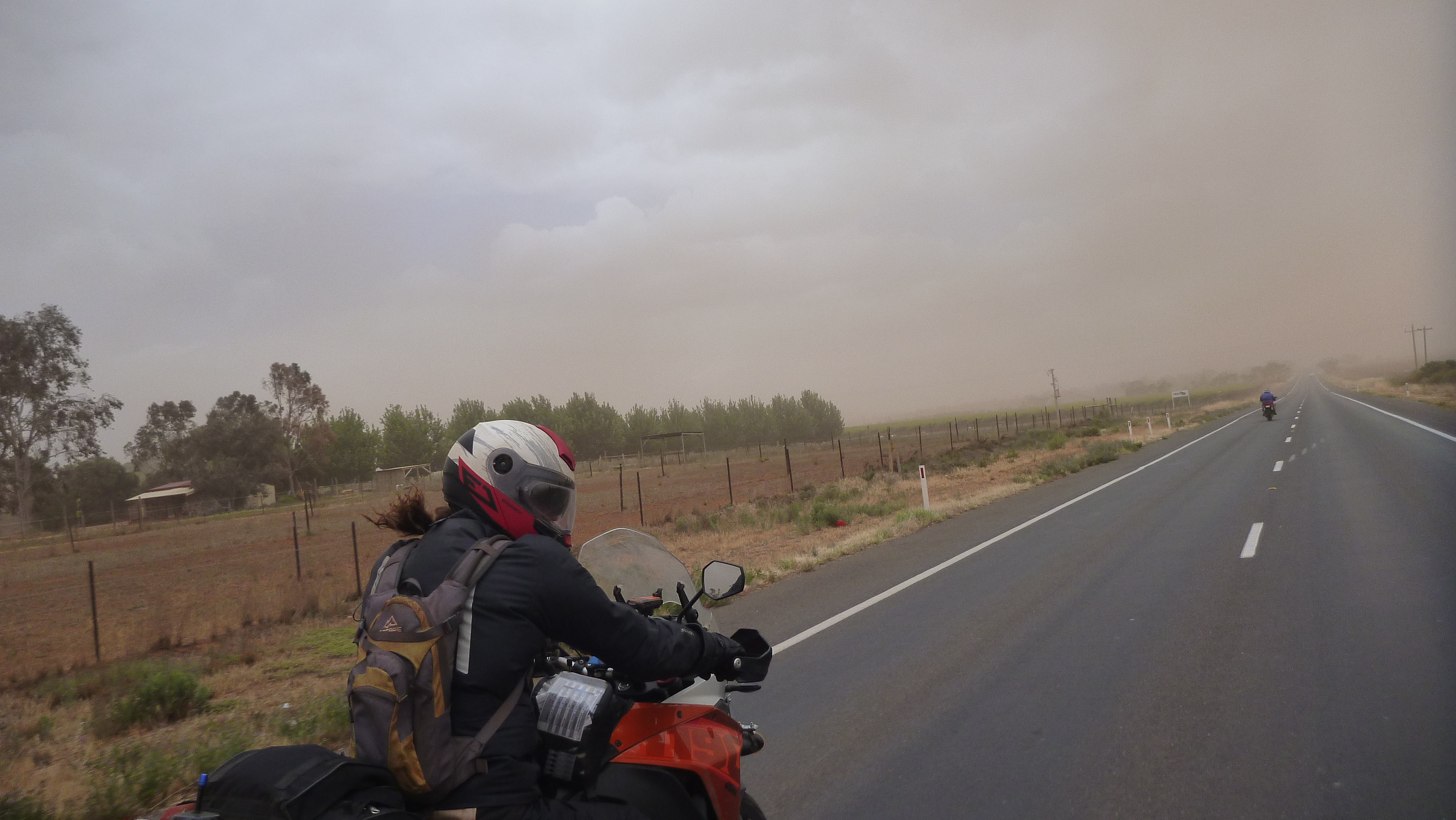 Ron again came out to escort us through town on his newly repainted Kawasaki ZRX. Given the colour of the sky/country I think this colour is actually “Mildura Green” 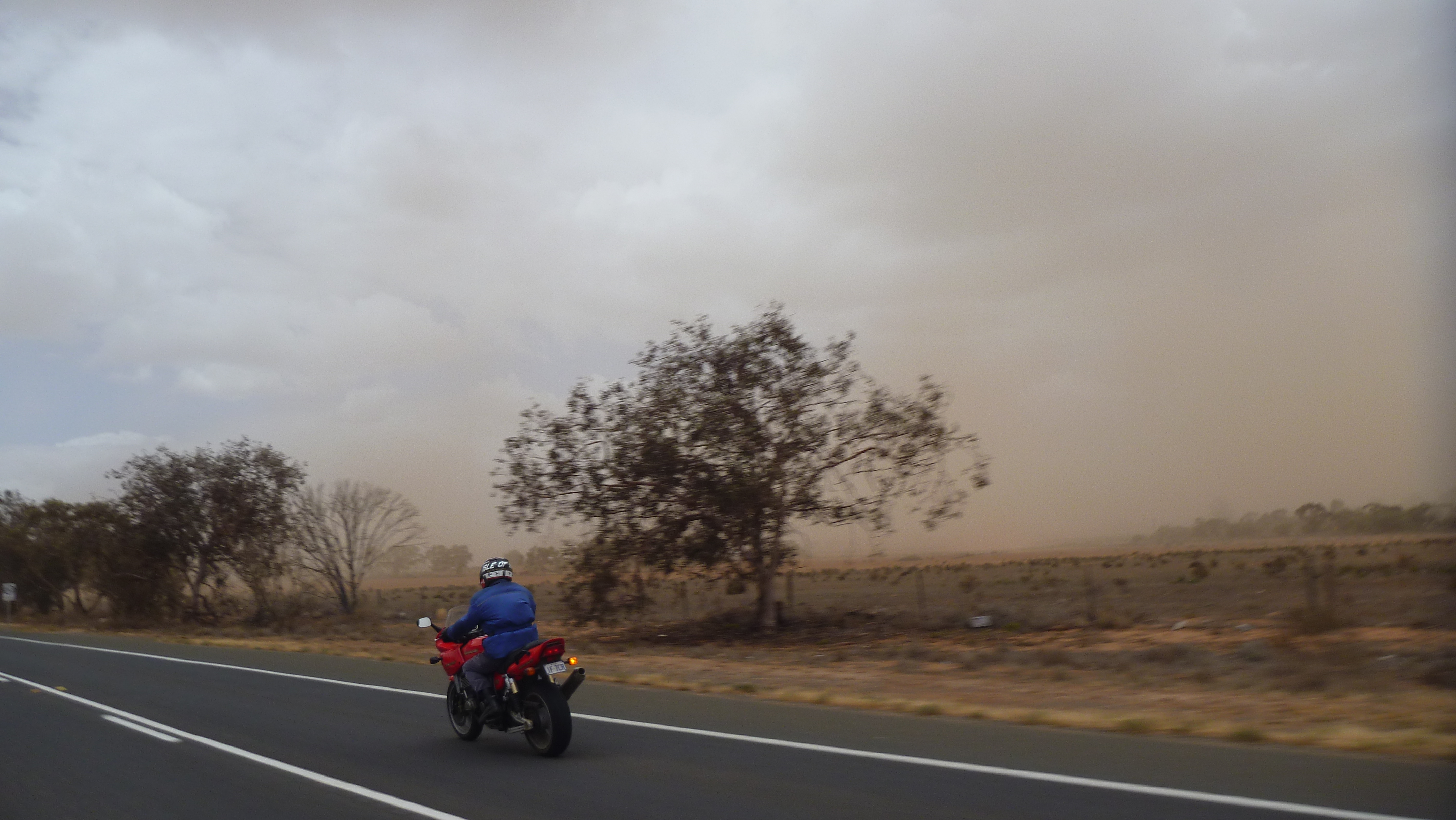 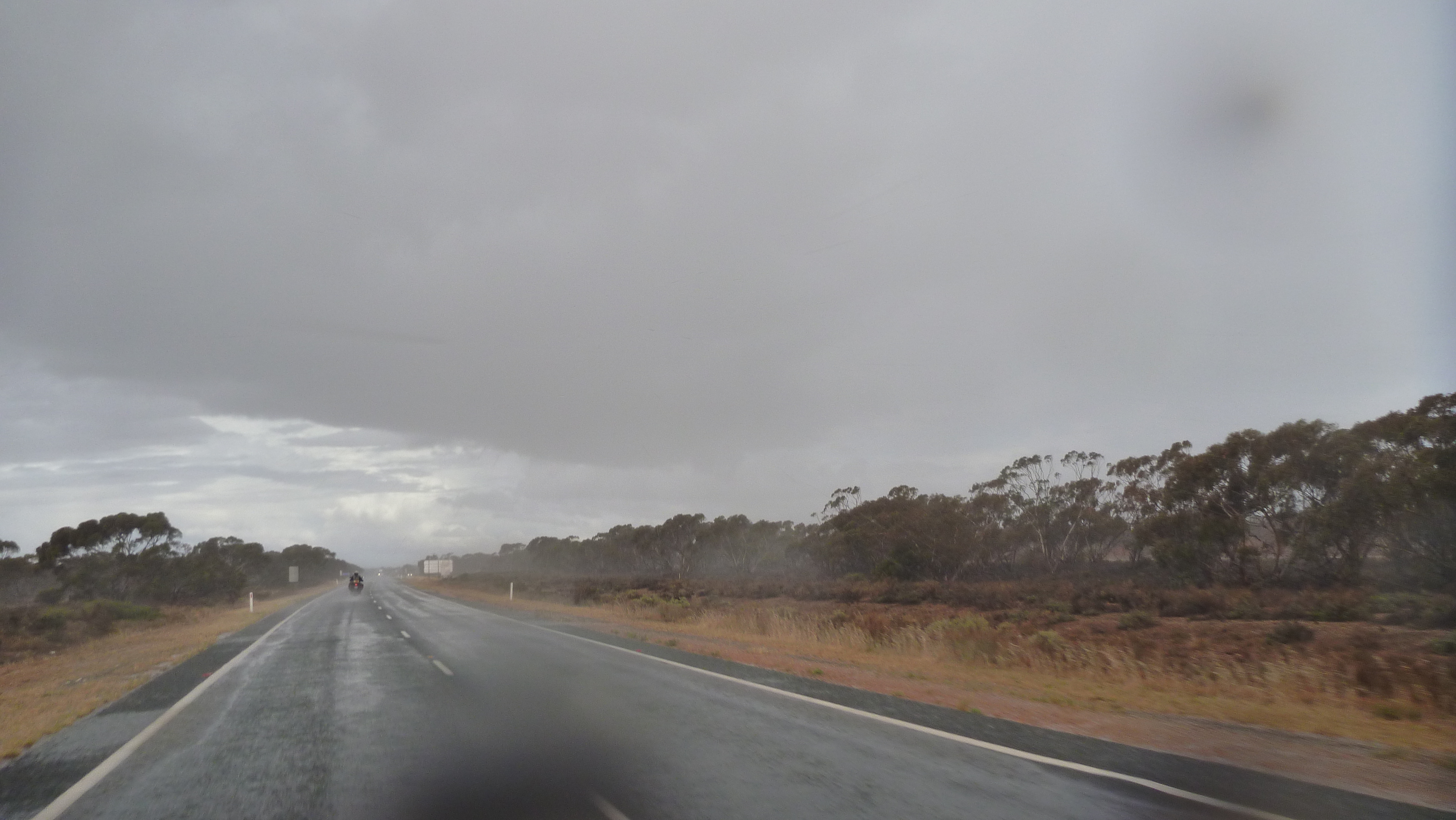 A quick splash and dash in Hay to get ahead of plan and the heading towards the east again. Not far out of Hay a couple of Tradies utes heading back in a rush to Darlington Point helped us make some more ground on the plan. Narrandera passed without significance and then back into the 100 zone (booo) before Wagga and fuel, feed and re-layering for the run up the hill.

Up to Tumut without incident and then through the roo shooting gallery (with the roos as the operators and you as the moving targets) that is the run along the lake, thankfully without anything really committed to the idea. Then gaining elevation past Talbingo chossing to stay on the Snowy Mountains hwy despite GPS recommendations to go down obscure fire trails; no thanks, not tonight.

Up towards Long Plain and we start seeing the first of the wild horses, oh goodie. Kiandra just on 2200 and Russ waiting on the side of the road. Bloody good to see a friendly face. Russ leads off to run interference on the wildlife for a while only to promptly stir up the first mob of horses we come across less than 2km down the road. Closest I’ve been to a horse’s arse since last time I did something without thinking. Let’s not stuff this up now!

Through the Adaminaby-kiandra road at a much reduced pace and then Middlingbank road for kangaroo and wombat pinball; how many different bloody directions can a mob of roos go!?

Through Jindabyne and heading up the last 40km to Charlotte Pass and the rain/sleet/fog/roos/deer/snow/ice just kept on coming. This really isn’t quite normal, is it? 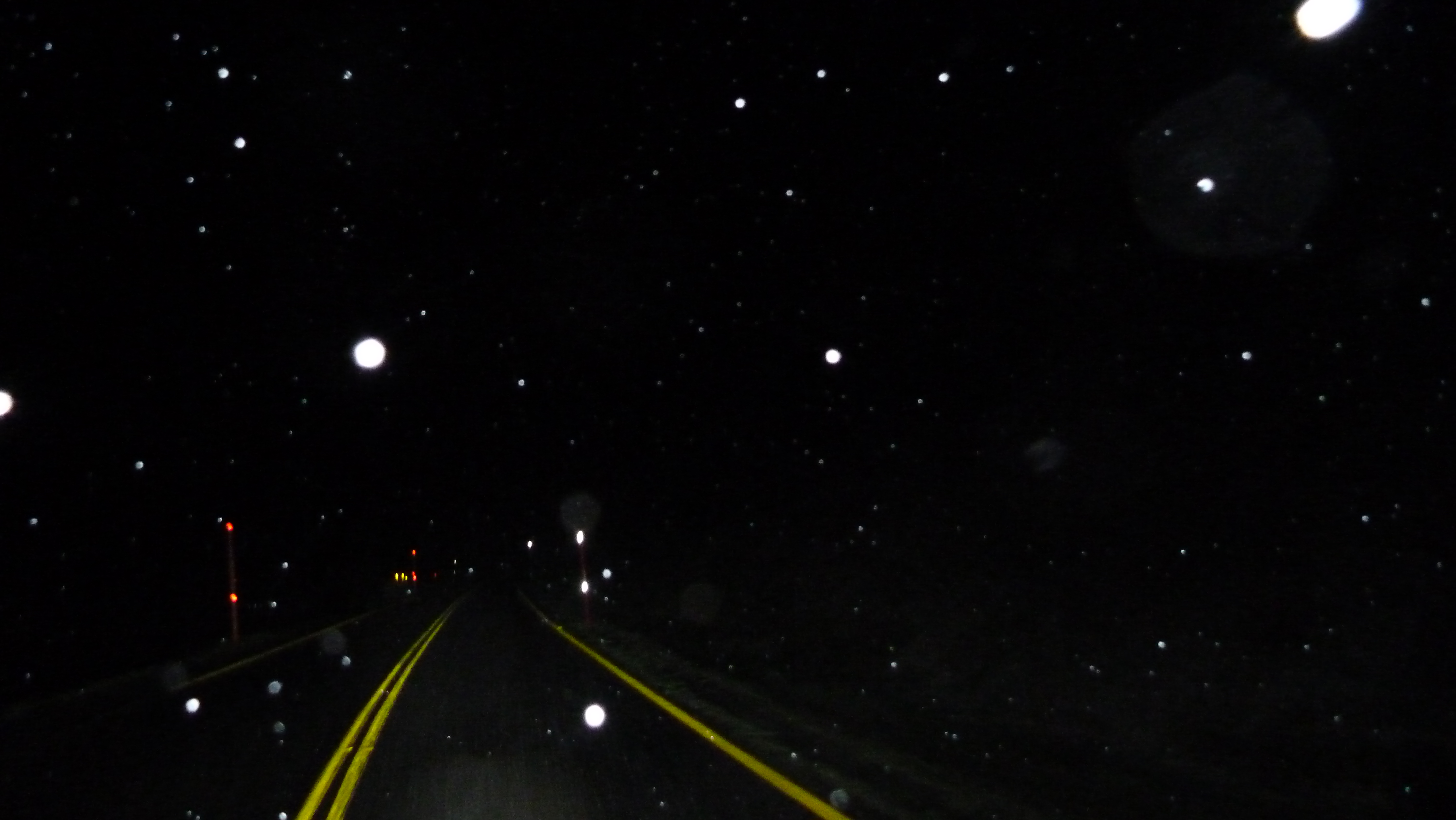 Eventually got to the parking area at just after midnight. 1852 gps km and 1847-odd metres of elevation we’re done. 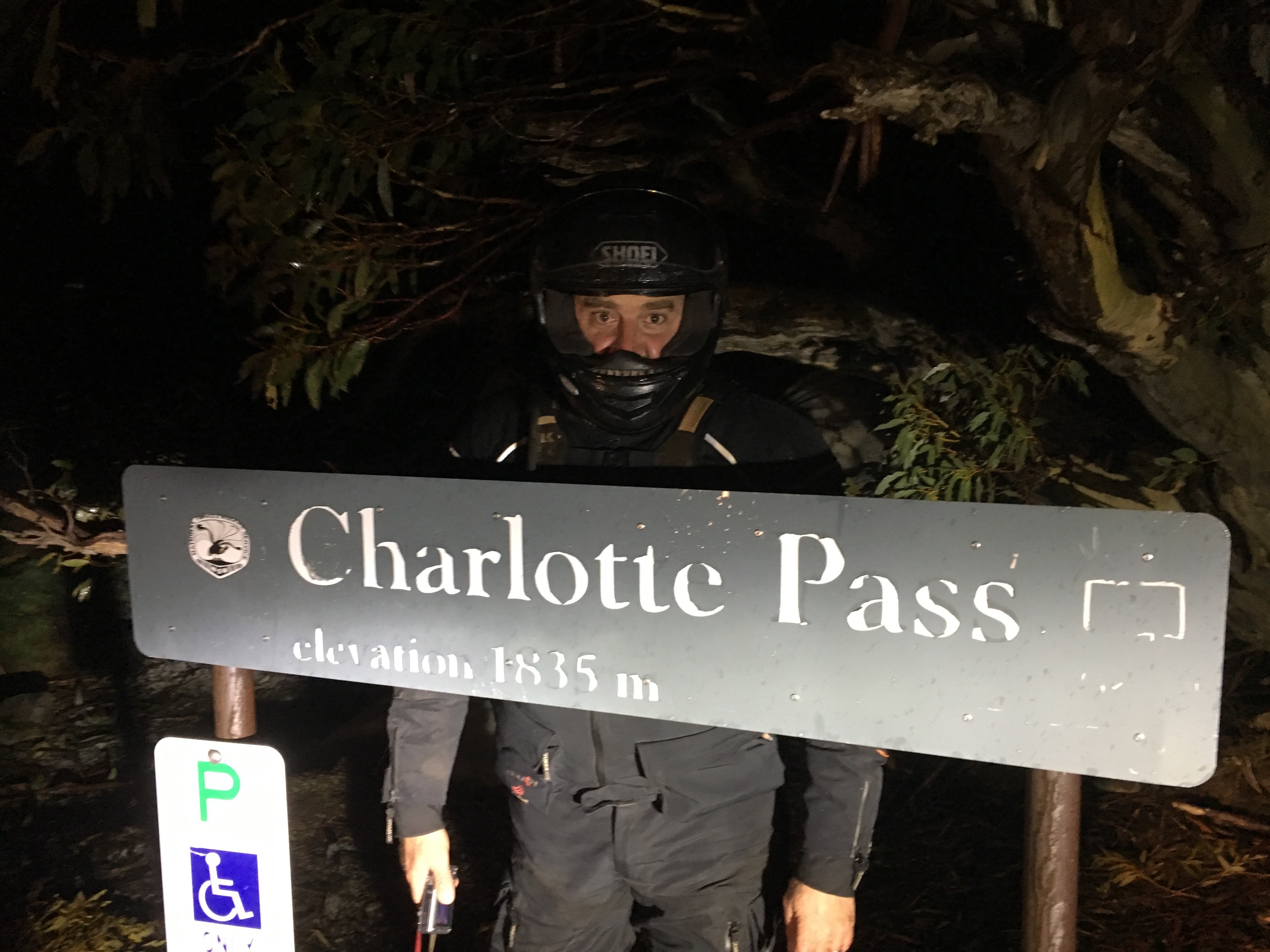 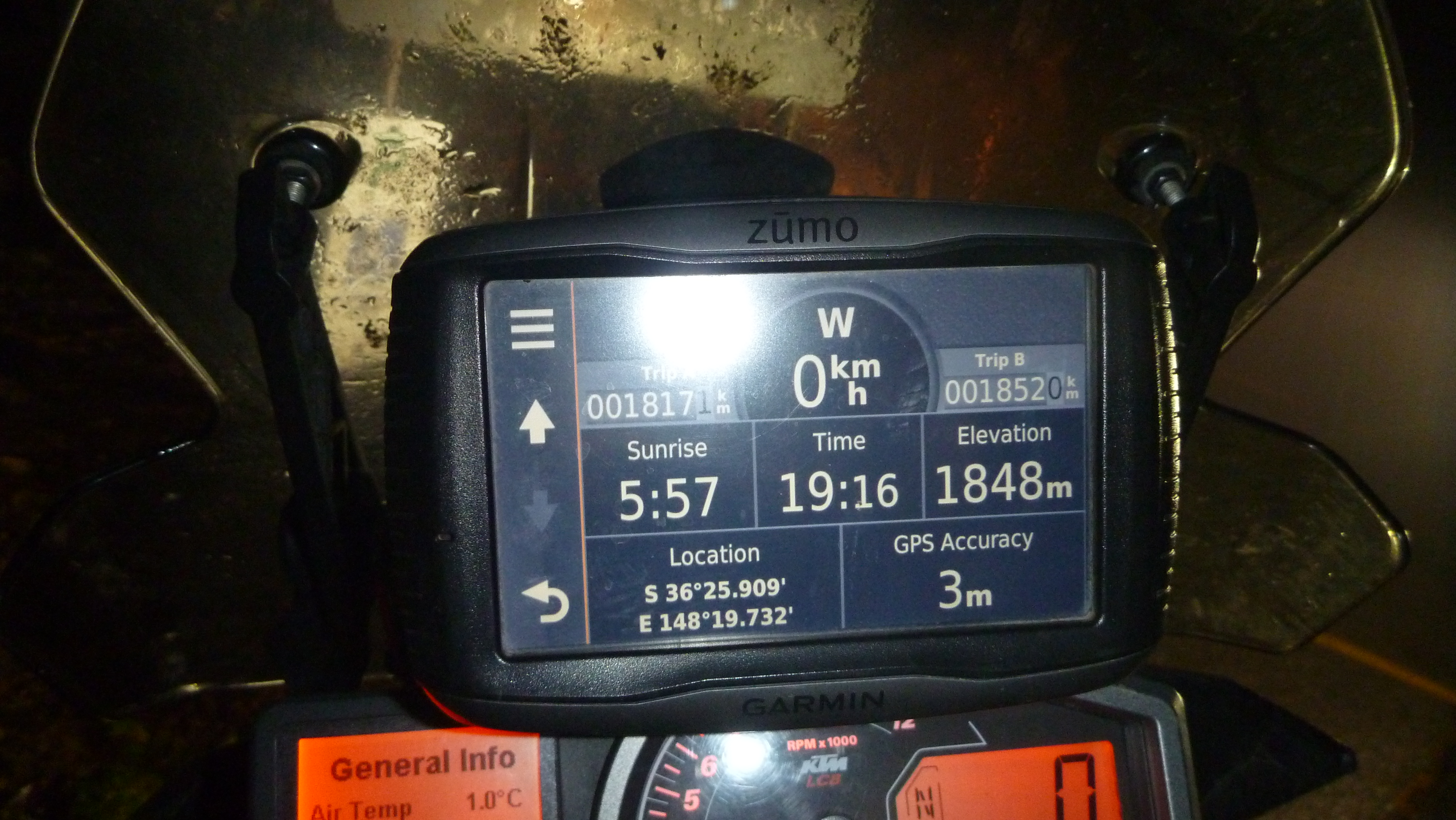 Nice to actually finish something we set out to done finally and the beer Russ had stocked the fridge with went down very nicely, thanks Mate.

Premier Member
#2
What's going on Thommo on a Kato?
Cool to see you get your redemption an IBA ride with the lot thanks, wildlife , wind , rain, sleet, dirt , dust , open plains, mountains, no fuel and beer.
Tough ride, great report thanks Ed.

Premier Member
#3
I know! It took a while to get used to seeing it in my mirrors!

#4
Congrats Ed and Thommo, great to see you knocked it over. As you know it is quite a hard IBA ride with dirt, long straight stretches, tight and twisty bits, notorious sections with the possibility of lots of wildlife and the clock ticking all the time. What else do you need for a nice day ride!

Is the guy at the Marree Pub an English fella whos name escapes me, but I know when we were there some 10 months ago, he was very interested in the LD riders that have been there. Nice bloke and nothing was too much trouble for him.
Last edited: Nov 5, 2019

Premier Member
IBR Finisher
#5
Congratulations on a very tough ride, one that I hope to take a crack at soon.

Great report and photos to go along with the adventure.

Thanks for sharing it.

Premier Member
#6
Thanks Michael. Thommo and I said a number of times how impressed we were that you and Lynn did it two up. On a road bike. In the middle of summer!
Yeah the people at the Marree pub are fantastic. I think the owners are Phil and Maz (who we discovered actually live in Burra near Canberra when we did the dustybutt) and the younger fella that manages it is Joe. Really helpful, made sure atm was going to work and have correct time and had no problem with us leaving a Jerry can of fuel stashed or the back. (Incidentally if anyone needs one out there we left it there with suggestion to make it available to any other rider that may need it.)

Jeff, I did hear tell that you may be considering it. Give me a yell if there is anything we can do on this end.

Premier Member
#7
Well done gents great ride. This one is quite different and well worth it, congratulations.

Rangas rule.
Great little pub if your in the area.

#8
Ed. said:
Thanks Michael. Thommo and I said a number of times how impressed we were that you and Lynn did it two up. On a road bike. In the middle of summer!
Yeah the people at the Marree pub are fantastic. I think the owners are Phil and Maz (who we discovered actually live in Burra near Canberra when we did the dustybutt) and the younger fella that manages it is Joe. Really helpful, made sure atm was going to work and have correct time and had no problem with us leaving a Jerry can of fuel stashed or the back. (Incidentally if anyone needs one out there we left it there with suggestion to make it available to any other rider that may need it.)

Jeff, I did hear tell that you may be considering it. Give me a yell if there is anything we can do on this end.
Click to expand...
That's right, Joe is his name, a real top bloke, glad he was helpful with you guys.

Premier Member
#9
Great report, I liked the bits with me in the best!

IBA Member
#11
It certainly is a ride with variety!
T

IBR Finisher
#12
Good one guys. It is a good feeling to finish a ride off as planned..

Premier Member
#13
Crappy said:
What's going on Thommo on a Kato?
Cool to see you get your redemption an IBA ride with the lot thanks, wildlife , wind , rain, sleet, dirt , dust , open plains, mountains, no fuel and beer.
Tough ride, great report thanks Ed.
Click to expand...
To quote linsaymac "If you don't ride like and idiot, or don't intend to, then KTM probably don't make a bike for you" explains it away.

Top ride guys. Plenty of time up your sleeve.

Premier Member
IBR Finisher
#14
Well done guys. This ride was too much for me on the day. I dips my lid to you

#15
Great work and thanks for the report

#17
Just like a hamburger, one with the lot. Congratulations to you both.

#18
Nicely done guys, thanks for posting up.

Good on you both for persisting with a goal and for the adventures you all had throughout the year.