Through uncertainty to relief

Premier Member
#1
I've been holding onto this ride report until I received the Certificate which arrived yesterday (posted on 9th October).

No dawn shot this trip- my cabin was on the port side of the ship! My roomie on the ferry said he'd seen Melbourne dawned with a temp of 27 degrees, so I set about opening every zip on the orange and black jacket. My ride home from the OZSTOC Rally in Tasmania was planned to be a straight shot off the ferry and head north. 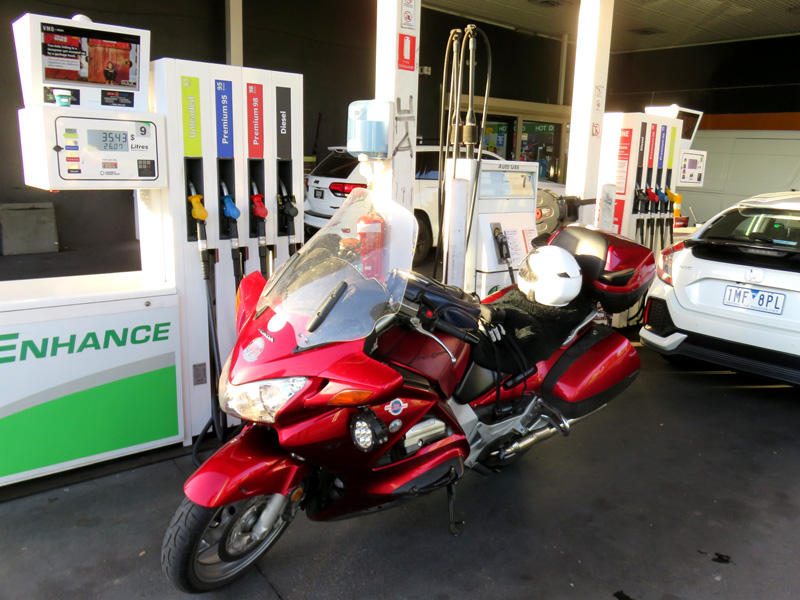 A more sensible start photo would have the Spirit of Tasmania in the background, but my focus was on finding a servo to get the start docket. I put "Fuel" in the GPS, which proved counter-productive as it led me to some irrelevant shed! It took a couple of enquiries of people stopped at traffic lights to find one in what is really a residential and shopping area. 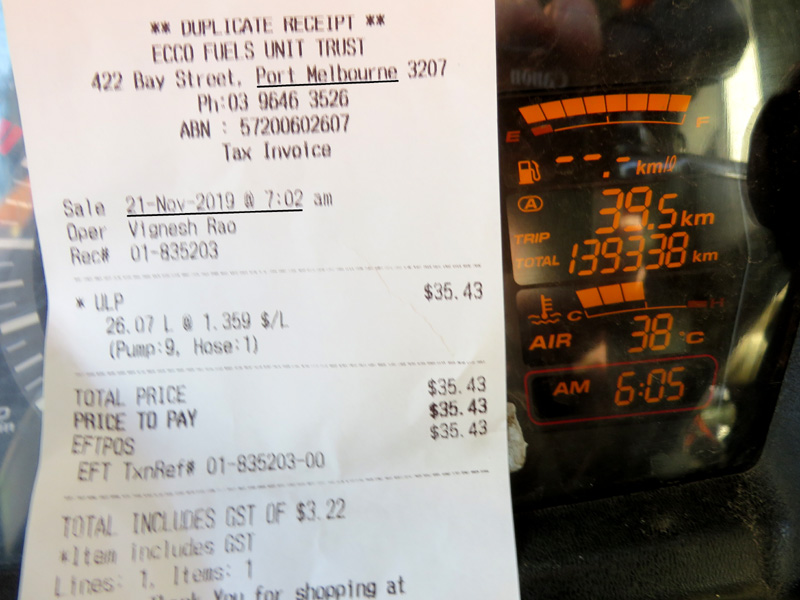 Then the real fun began as GeePs and I argued about the way out to the Hume Highway. It was eventually achieved by ignoring the electronics and following the green signs.

By Tallarook I was ready to bite the belly out of a low flying duck. 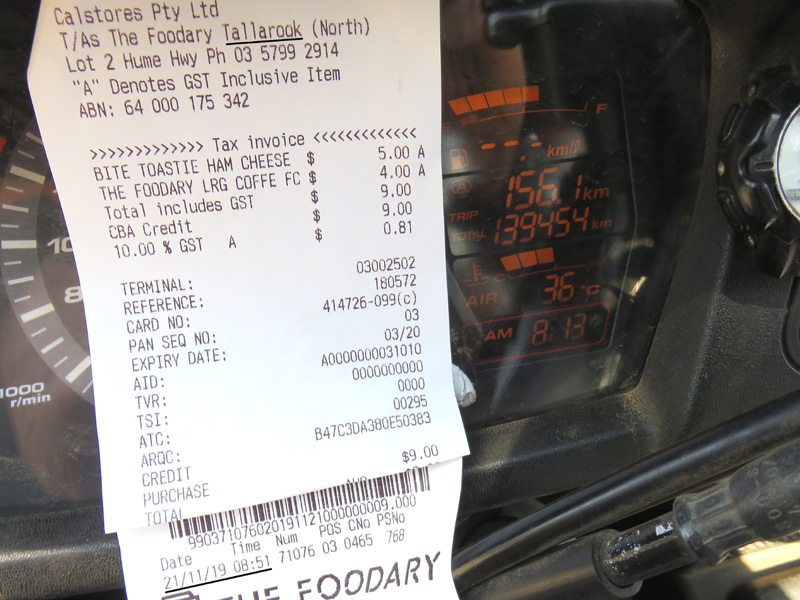 I can report things aren't crook in Tallarook, indeed they're better off for rain than most of Oz. But the smoke was everywhere, inducing anxiety
about possible road closures on my planned route. While moving I was seeing 42 degrees registered on the bike's panel. The next Rest Stop I saw I pulled in to drink a Coke selected in honour of my son. This began the day's emphasis on hydration. 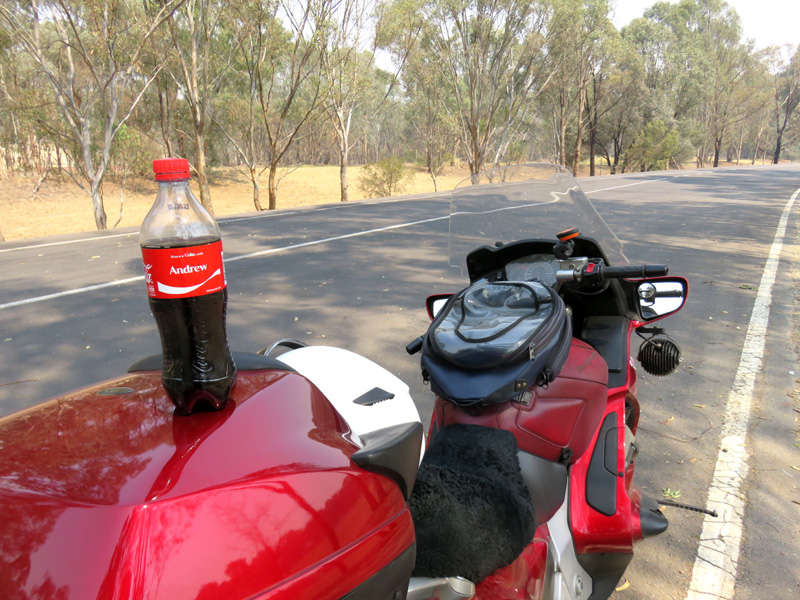 The two border crossings appealed to me as something worth a photo. 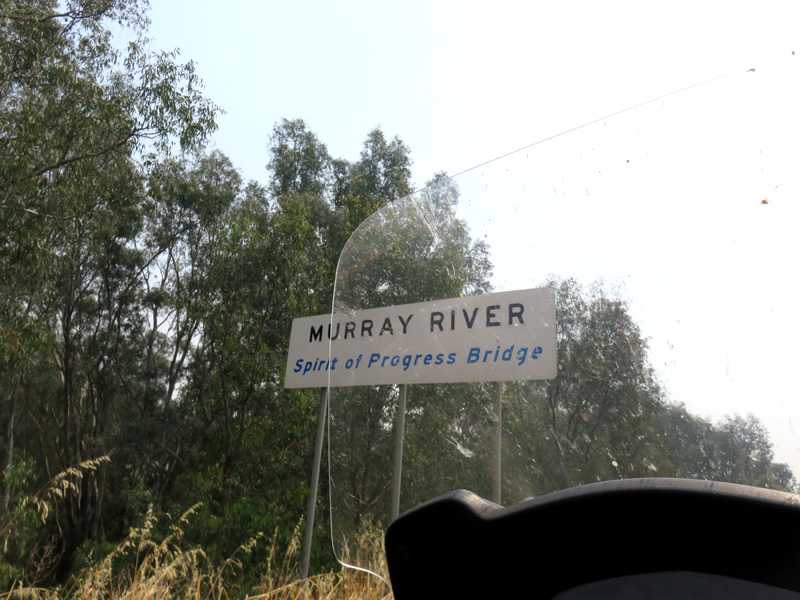 Tarcutta's boast is their being the halfway town on the Hume. I have a pic of the tall roadside sign, but had never previously been into town. This day I decided it would be a good time to give them some petrol money and seek the advertised Truckies' Memorial. 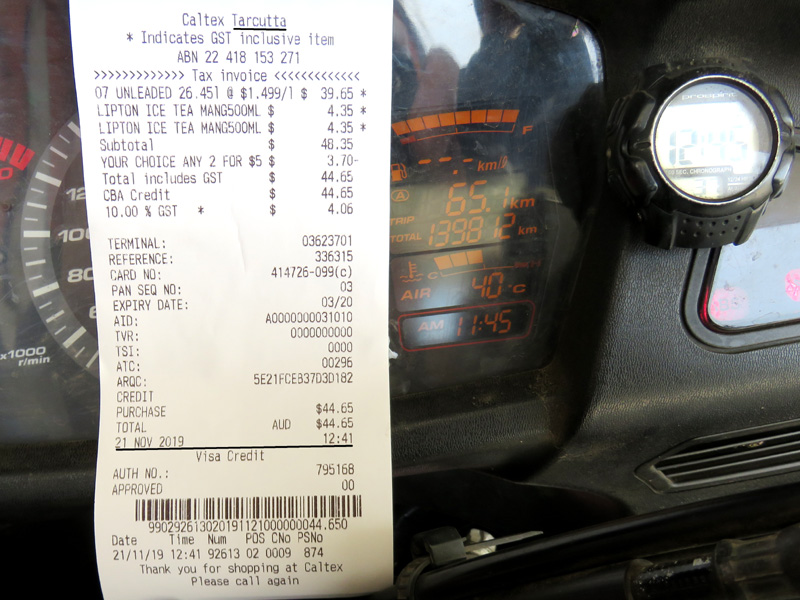 I'm a coffee guy; it's Mrs Biggles who is the tea person, but I needed more fluid, so thought I'd try this version. 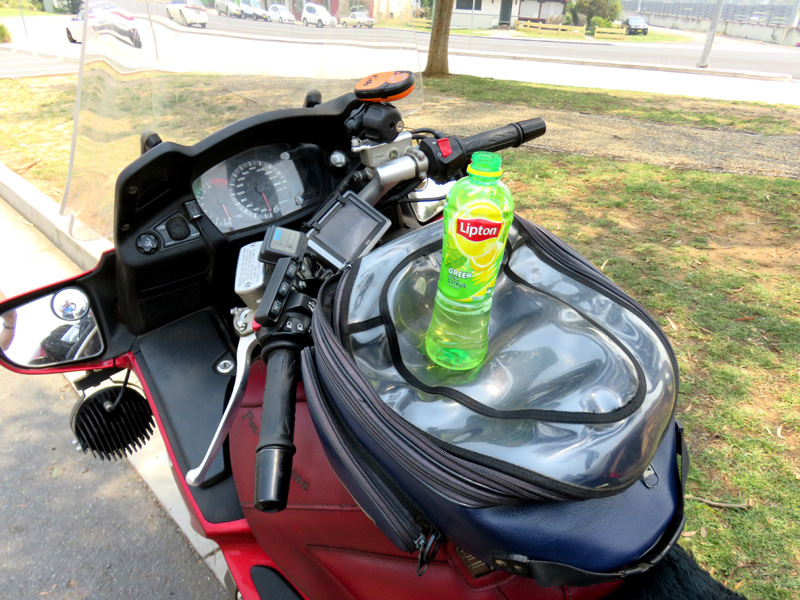 Memorial walls can be fairly uninformative, but one of the startling features of this wall is the relative youth of its subjects. There are very few here
aged more than 50, with many in their 20s and 30s. 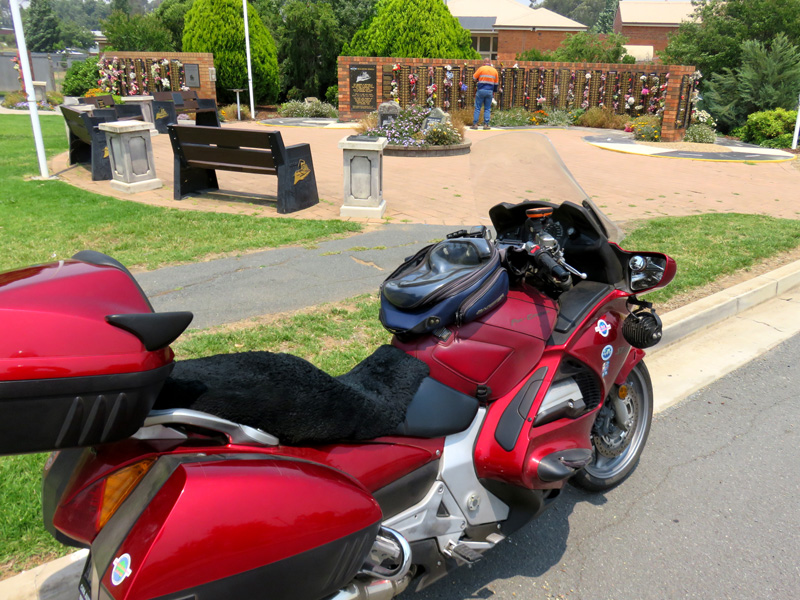 Victoria has wisely limited roadside advertising, but in NSW and QLD it's endemic. I take particular exception to this horrible example- a huge board advertising itself by pointing out to me how blatantly inescapable it is! To be honest, whenever I see one, I boycott it with my eyes by looking
everywhere else, thus refusing to "see" it. 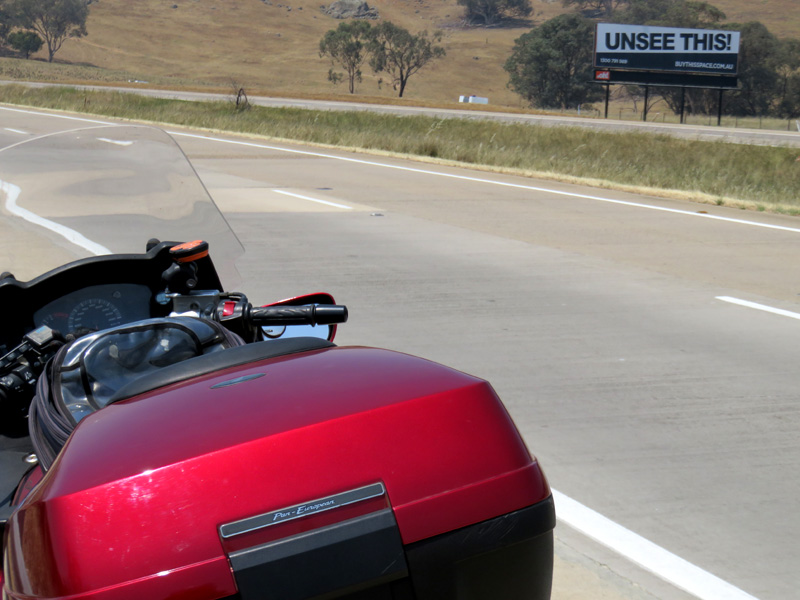 The smoke that filled the sky from Melbourne to Yass had cleared when I reached the Cullerin Range Wind Farm. It was then that I realised what had happened. These massive windmills are erected to combat Climate Change, and a scientist with a degree in Smoke had appeared on Tassie TV declaring there is a complex link between Climate Change and bushfires. So these things were working as planned- there were no bushfires in this area and it wasn't until I got nearer Sydney that the smoke reappeared; obviously beyond the range of the windmills' effectiveness. I did note that despite the very strong wind, four of the fans weren't turning. I deduced that since it was a very hot day, they'd decided to let the solar panels do the heavy work of feeding the State's airconditioners. 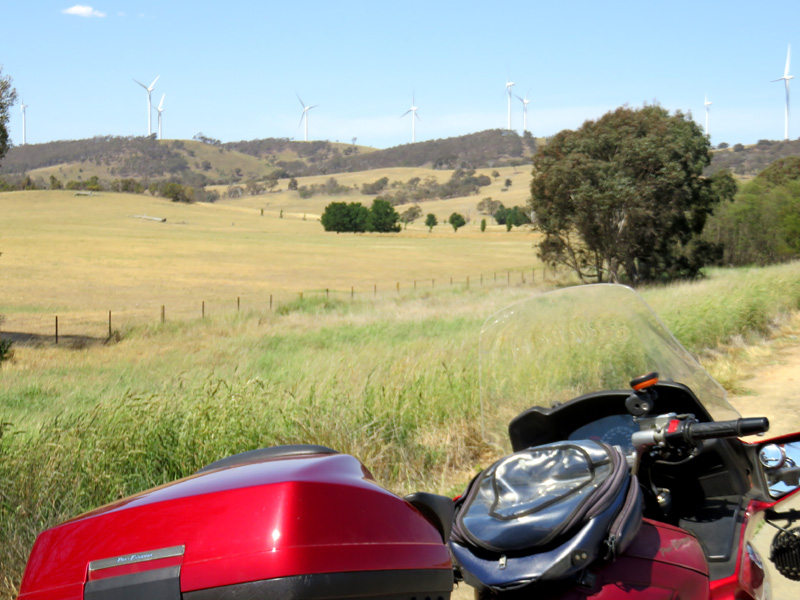 South of Sydney I began seeing these distressing signs. My plan was to travel via the Pacific to avoid the arid inland with its hungry roos. I figured I
would need to make a decision before Newcastle so I could switch to the New England, or in a worst case, go out to the Newell, making for a very long trip home. I had checked the road website on the ferry and there was just a warning about reduced speed due to fire damage to the road south of Taree. 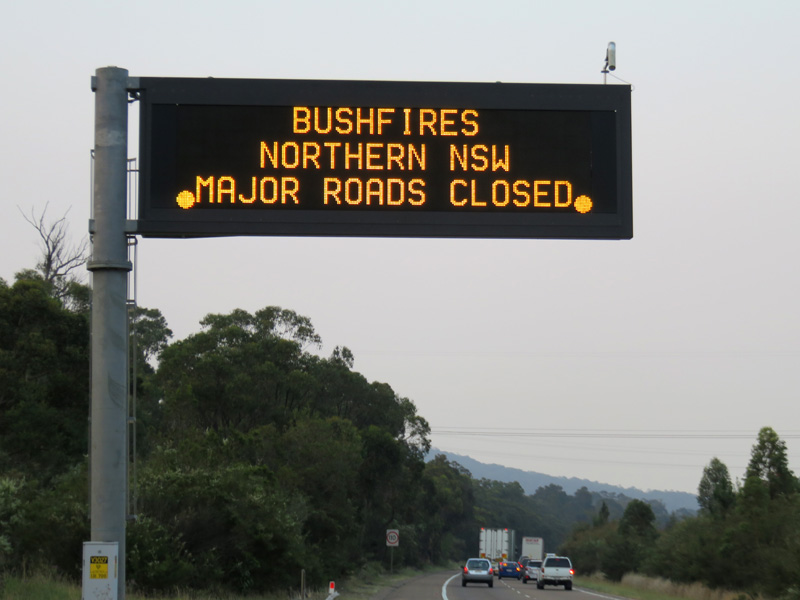 Seeing more of these signs did nothing for my peace of mind and so I made Jilliby (aka West Wyong) my dinner stop. While I was eating I opened my tablet to get the latest on the road situation. The warning about the road near Taree was still there (and is now, days later). There was also a warning about smoke between Uralla and Glen Innes. The website has a facility allowing a departure point and a destination to be entered so I put that in and it said I should go up the New England to Tamworth then via Warialda to Texas and home. While I pondered that advice a young chap came up behind me and said, "You've got a big ride there, Mate!" I agreed. Then he said, "You can go straight up the Pacific, you've got nothing to worry about. I'm a courier and I would have heard on the radio if it wasn't safe." I turned to look at him, and his shirt declared him to be Michael. Then he was gone. I reckon I was visited by an angel just when I needed reassurance. 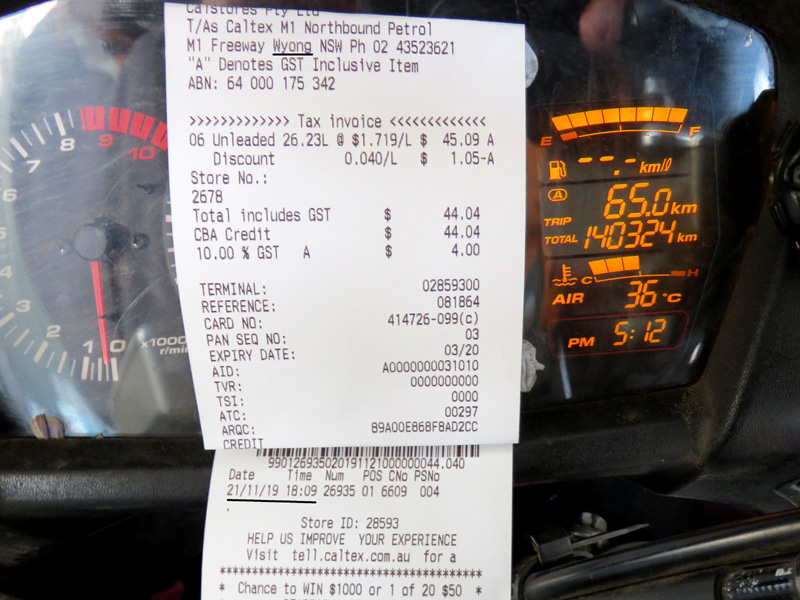 The sun sank as an orange orb directly behind me on one stretch of the M1, but I missed the photo opportunity. It was deep dark when I was in the Failford area. The attention given by the RTA to the advertised problem had been to cover every speed sign with an "80" for about 20 kilometres. There appeared to be nothing wrong with the road surface but many signs were badly damaged by heat and there were smoke stains on the posts under the guard rails. I dutifully sat on 80 kph but felt silly as everyone else blasted past at 110. It was soon obvious the warning was an overkill, as was the greatly reduced speed limit.

My refuel point south and north used to be Halfway Creek, but the roadworks there now make access to the servo from the south difficult, so I elected for a Coffs Harbour stop. 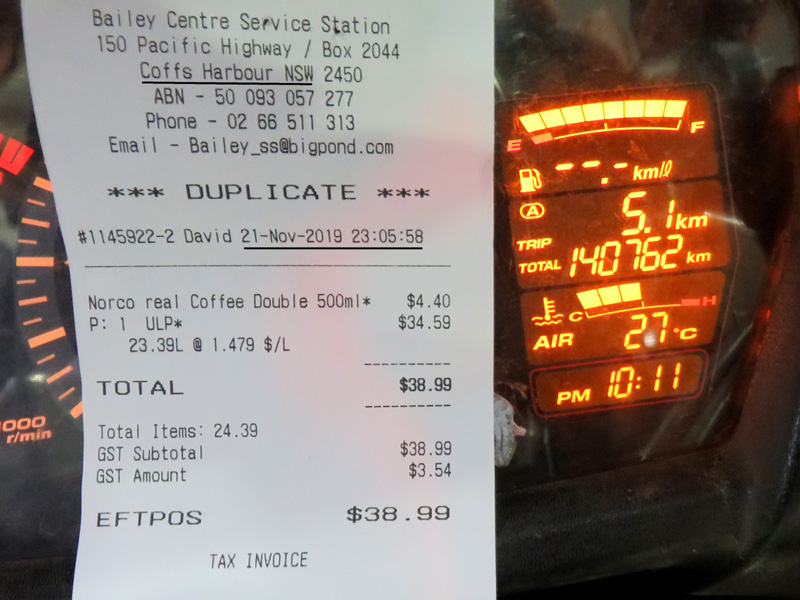 Crossing into Queensland there was no traffic. I had already decided to try to get the distinctive pillar's photo, and in the quiet early hours it proved
easy. Just using the "auto" on the camera didn't make a very good photo, but I wasn't hanging around to experiment with manual settings. 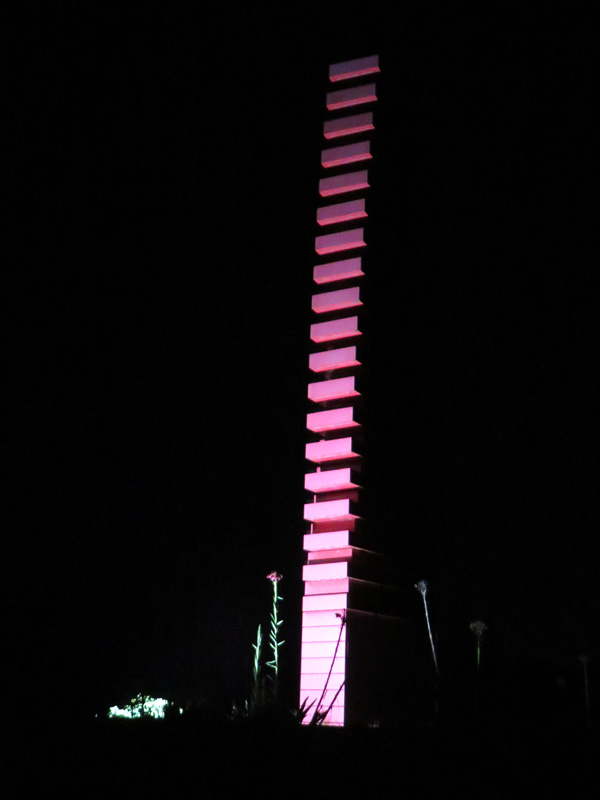 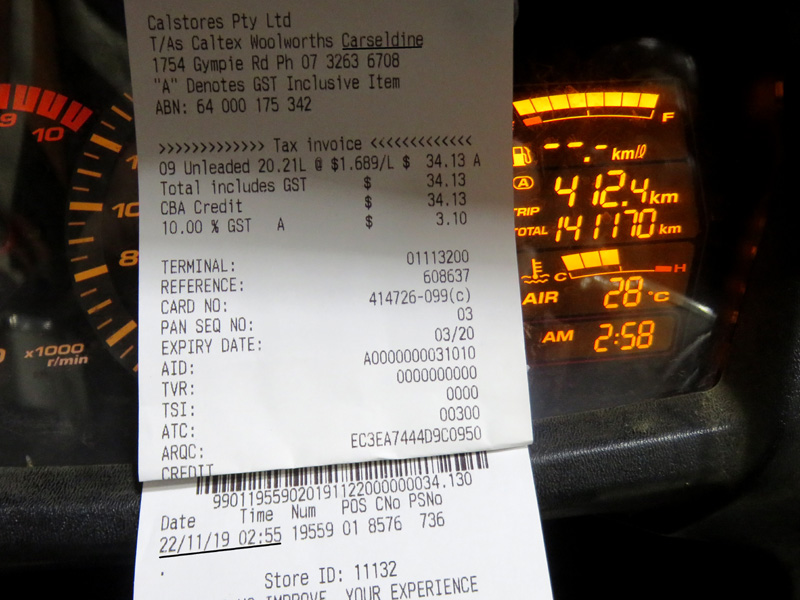 When the garage door went up I imaginged I heard Suzy V-Strom give a little squeal of delight to see her stablemate home again. 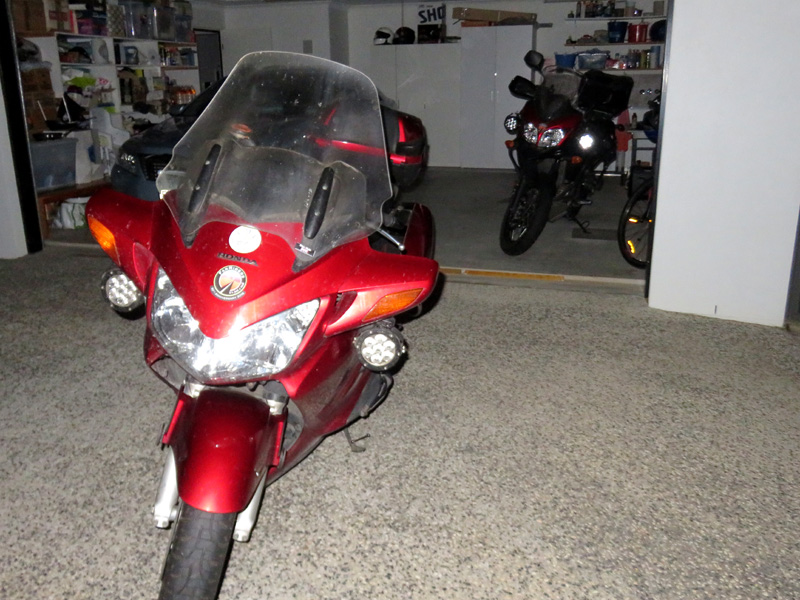 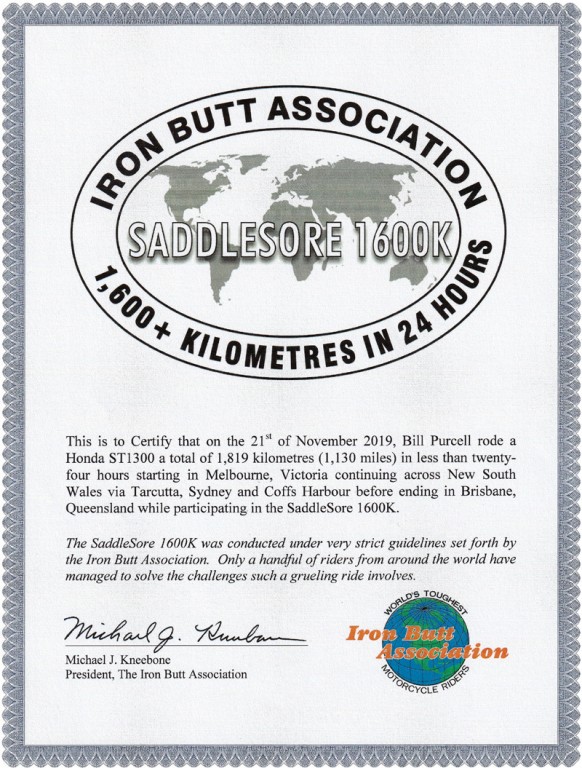 Premier Member
#2
Well done Biggles....a bit of my family history where you say "Jilliby (aka West Wyong)"...I had 8 great uncles & aunties born at Jilliby Jilliby as it was once known, 4 of them are interned at the little cemetry that remains there today.

#3
Good one Bill, thanks for sharing

Premier Member
#6
Great report and photos as always Biggles. A great ride on a hot day and also considering the prevailing conditions re bushfires. Top work!