#1
Shane's (ACTCapo) plan to run a Spring solstice around some NSW Painted Silos got me thinking.
We have painted silos here in WA, the silo run may well give the required distance (initial check against Googlemaps confirms this). Check the Solstice date/time....hmmm...that works. "permission" from the Organic Speed Limiter not yet granted...but I reckon it'll be ok. I bought her sewing machine #7 the other week, and have nursed her thru Covid this week. Gotta be worth some browny points.

So.... the map plan looks like this:
WA Silo run

Plan will be to leave Mindarie at 0300hrs Friday 23 September, out to Northam then on from there.
My ETA back home will be about 2200hrs that night. This avoids any peak hour traffic, very little rising/setting sun.

Happy for comments, suggestions and if any WA rider is interested to join in, very happy to share the road.

#3
Brookester said:
Ravensthorpe to Albany is a notorious skippy infested stretch especially just south of Jerry..
Click to expand...
cheers...my timing schedule suggests that will be between 1300 and 1600hrs...so should be ok
Last edited: Jul 10, 2022

#4
Dicky Knee said:
Shane's (ACTCapo) plan to run a Spring solstice around some NSW Painted Silos got me thinking.
We have painted silos here in WA, the silo run may well give the required distance (initial check against Googlemaps confirms this). Check the Solstice date/time....hmmm...that works. "permission" from the Organic Speed Limiter not yet granted...but I reckon it'll be ok. I bought her sewing machine #7 the other week, and have nursed her thru Covid this week. Gotta be worth some browny points.
Click to expand...
That's the first time I've inspired anyone for a long time!

Premier Member
#5
ACTCapo said:
That's the first time I've inspired anyone for a long time!
Click to expand...
Just like a grandson, is there such a thing as a "grand-inspiree"?

#6
Brookester said:
Ravensthorpe to Albany is a notorious skippy infested stretch especially just south of Jerry..
Click to expand...
As is the Albany Highway between Williams and Armadale!

Premier Member
#7
Best wishes for your planning Dicky Knee! With the floodwaters here in NSW and the extensive damaged road surfaces (and associated road works), it is a challenge to plan much in the way of unencumbered riding at the moment. As I have discovered, the Live Traffic phone app has yet to catch up with the flood water road closures

#8
Well, at this stage, we are all systems go.
Weather forecast looks perfect, cool night/s, 19 - 23C during the day - NO RAIN
Really pleased to have the company of Russell for the trip. It certainly has eased the concerns of my Organic Speed Limiter (who won't be joining me) to know that I will have 'divine guidance' accompanying me

Premier Member
#9
Your boss doesn’t know me very well does she?

looking forward to it.

Premier Member
#10
"The responsible one" , riiight. This could go well!

#12
Done and dusted.
Russell and I had a great ride.
Pics and report to follow

Premier Member
#13
Good on you Steve and Russ. I was watching on during the day, coincidentally you arrived home at almost exactly the same time I was landing in Perth. Seemed like a fairly efficient run, even with all the corners.

Premier Member
#14
We had the OA around 90 all day until we got to Albany, where we knew we had it under control.

I thought the corners and silo photos would be frustrating, but actually really enjoyed how it broke up the ride. Might have a rally in me after all.

Note to self, don’t try to make time on the Albany Highway on a Friday night! More on that later. Bloody great to share your first documented (pending) ride Steve, thanks for a great day!

#16
Well, the ride was completed successfully on Friday (23/9).
Left home home at dark o'clock (0300hrs), out to Midland (bottom of Greenmount) and waited for Russell. It was bloody cold, and only going to get worse as we scaled the scarp over to Northam and beyond

We took photos of the bikes at each of the Art locations, but Northam was always going to be difficult, because it would be dark, and access to the CBH yards there is secure. So we did our best -

Then on to Merredin - Still cold. Temps were around 2C for most of the run so far. First refuel here (corner docket required)

Next stop - Katanning. No silo art here, but they do have street art. We refuelled (again) and found a nice bakery. Bad move, precious minutes lost but the pies went down perfectly (that was breakfast for both of us)

Next stop Pingrup. Some of these local servo/corner stores are hilarious. Russell needed a splash and dash for Big Bird, I was fine, so decided a small chocolate bar was all I needed. The lady behind the counter wasn't going to wait while I searched for the chocolates, then made a selection. She disappearred thru a doorway. When I negotiated my way back to the counter, she was nowhere to be seen. A bloke in the Post Office area (these establishments really are a rabbit warren) motioned to me that she was at that counter, so I walked thru, only to find she had returned to the front counter. By the time we arrived at the same counter, she did not look happy, and when I asked for a receipt (for a small chocolate bar), the look I got was priceless. Anyway, I digress. Pingrup Silos -

Next stop - Newdegate (and this was almost halfway - at 791klms in)

Then on to Ravensthorpe (and the beginning of the run home). A fair bit of time was 'lost' up until now, getting photos, then getting receipts for each major corner and the occasional faffing around, but now we had the chance to lift the moving average speed as there was some bigger distances between here and Albany, then finally Perth.

Onwards to Albany via Jerramungup (for a quick leg stretch).
Albany stop took a bit longer - refuel, clothing change in prep for the cold run home and thru the city to the wharf area to get the shot.

The run home included a splash n dash at Williams then up to Perth. Some untimely precipitation occurred during this leg. Bloody annoying, as my visor was failing to clear the water and made it hard to see the way. Together with my stupid decision not to put the pinlock visor on, I was having a really uncomfortable time as lead bike. Throw in the fact that despite dipping my lights in a manner that the oncoming traffic could see I dipped my lights, they still wanted to flash me. As an exercise, I turned the Denali's (dual intensity) off, and just ran with the Yamaha's standard (LED) system - no issue.
Ah bugger them, my safety is more important - Denali's back on.

I arrived back home about dark o'clock (again) - around 2320hrs. Russell SMS'd me that he made it home ok, I responded with the same.

A great ride. I had run the plan thru my head and on the desktop PC over and over in the weeks leading up to the run. It had been a long time since I had been in the saddle for this duration and I was no younger than the last 'attempt'. So the ride to Paynes Find a few weeks back was a great way to remind the body/head, what was in store.

Thanks for accompanying me Russell. It was great to be able to ride this one with a friend.

The reception from the Organic Speed Limiter over the last 24 hours would suggest she's not keen to see me do this again. We'll see

I'm going to send documentation via the email method.
***Question: Do I send the paypal remittance before I submit the documents, or do I send the documents, then pay by paypal, then send the payment confirmation. Also, is payment made to an authority here in Australia, or does it go to the USA, and if so, can anyone tell me what the going rate is for a SS1600 certificate please?

#17
Thanks for the write up Steve.
Verification Fees Payments are made to the USA
Please have a look through the information contained in the ride requirements for the SS1600K regarding submission

Loved the photos of the art, you guys have some really cool stuff over your side of the country. Hope to see you briefly in a few months time...hint.

Premier Member
#20
The wonders of the evil iPhone, you can just about make the art out. Great sharing the road with you Steve. 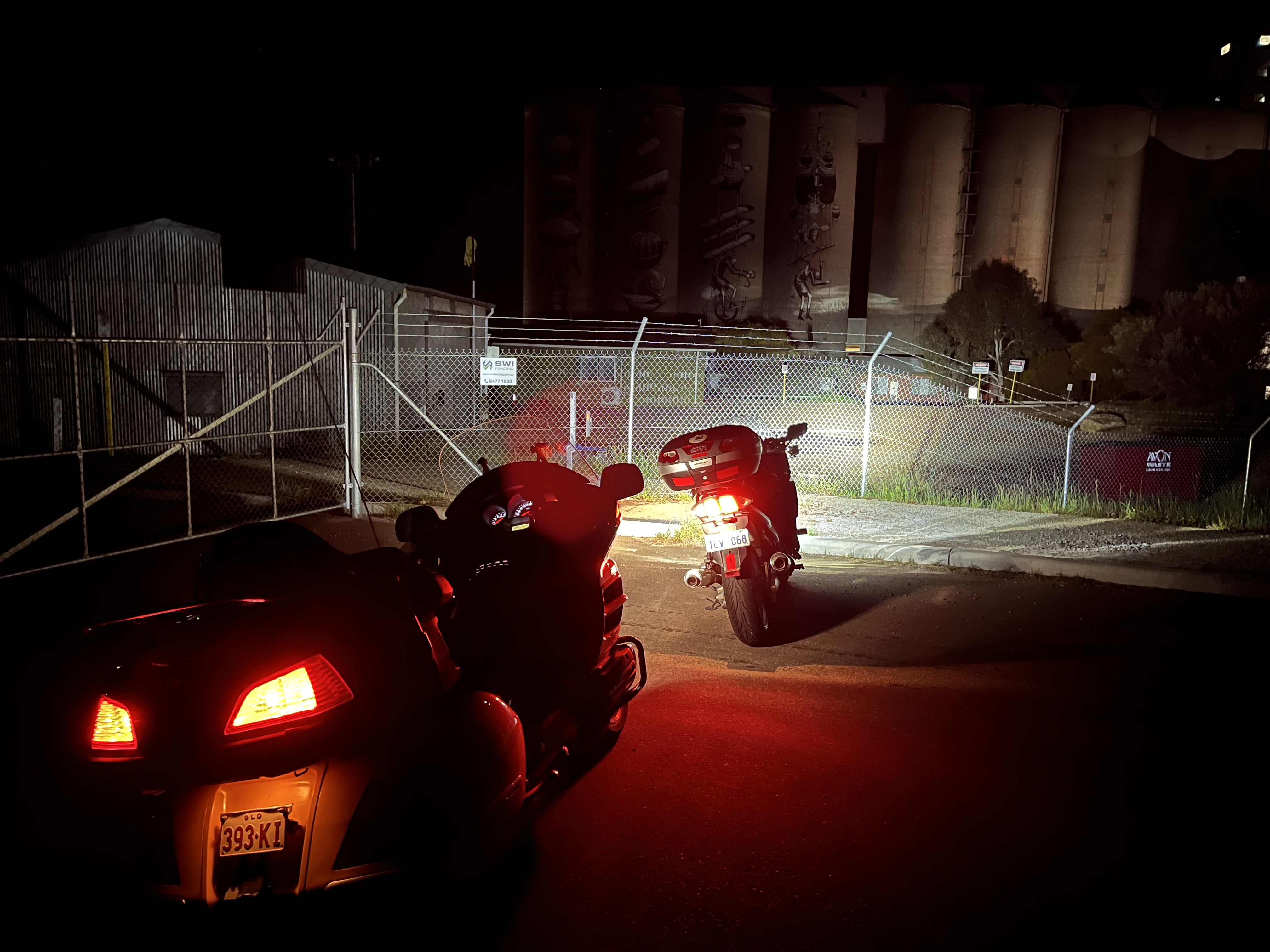