Premier Member
#1
It was the event of the Winter Solstice, and a ride through that day would complete my "set" of Seasons Rides. The timing wasn't ideal coming the day after a weekend group ride away to Agnes Water and Town of 1770. Others on that ride had already certified me insane, so I didn't need to explain to them why I had to leave them early to get home to grab a bit of sleep before the next day's ride.
The sleep went better than I'm used to in preparation for these outings, and I was well prepared. Before going away for the weekend I had charged up and tested my heated gloves and vest, got out a pack of "Little Hotties" and ran the heated grips. The Ride Plan was finalised in Vn 2.1.0 and the tank bag set up with the printout and Log sheet. Everything looked just as it did before every other middle-of-the-night departure.
Leaving home a few minutes before midnight to ride to the local servo, I was approaching a red light in a back street. There was a car coming towards me about 300m away and no other vehicle in sight, certainly not on the cross road, so I slipped around the left turn and headed down to the servo on the main road about a kilometre from there. As I turned in and sighted my ride buddy, I also sighted red and blue lights in the rear view mirror. I'd been sprung. The lady Policeperson was straight into the charge. I was trying to get the helmet off and walk towards her and, of course, was ordered back to the bike. I asked if she could hold on while I got the helmet off so I could hear properly and that was granted. After she'd had her say about the dangers of running red lights, the Policeman (driver) said, "I'm a rider too, mate, and while it may not have been dangerous, it's not a good look." He then noted the other ST1300 waiting at the pump and asked if I was meeting up with him, and where were we going, to which I replied, "Yes, we're going to Gympie." With that I was allowed to go with just my misdemeanour recorded on the official iPad but without a ticket.

Not my best start to a ride, but sure no one else needed to work on my behaviour, I pulled up at the pump and put the nozzle in the tank only to be blasted by a loudspeaker telling me to take my helmet off before I could fill! When I went in to pay I tried to point out the helmet rule applied to entering the shop, but she wasn't having a bar of it.
Because I have good lights and the Roo-reversing horn, I get to lead and my bud comes along behind also on full high beam. We had a leg stretch at Kilkivan and as soon as we set off my spotties started to flicker off and on. That's strike three! What next? Blaming a dodgy switch I got Mate to go ahead, which he did with a great deal of trepidation. Approaching Goomeri I overtook him to show the way through town and then fell back. When he shot past the Chinchilla turnoff, I realised I should have taken the lead at Wondai. I waited for the few minutes it took him to do a u-ey and come back. It turned out he thought we were going to Kingaroy... and that, folks, is why I do the Ride Plan ;-)
My spot lights had come good, so I led the way to the 4:45am breakfast and first refuel. Steve's bike is the same make and model as mine (although a later year) but burns at least 15% more fuel, and he was down to 10km range left. I'd prepared for a possible problem on that leg, carrying a plastic jerrycan in the pannier. Anyway, you know the drill here- Maccas Bacon and Egg Muffin and coffee.
The next leg stretch was Mitchell. They're proud of their heritage out here. 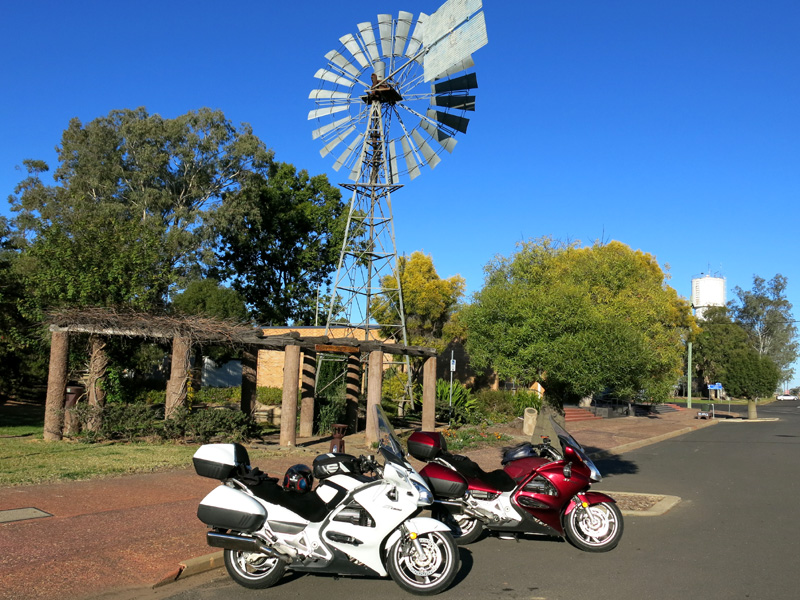 There was a fourth glitch- for the first time the batteries in my SPOT failed twice. Obviously the spare set I was carrying was time-ex, hence the very expensive set I bought at the Augathella servo.
Our turnaround point was Augathella. In the absence of silos, they painted their water tower. 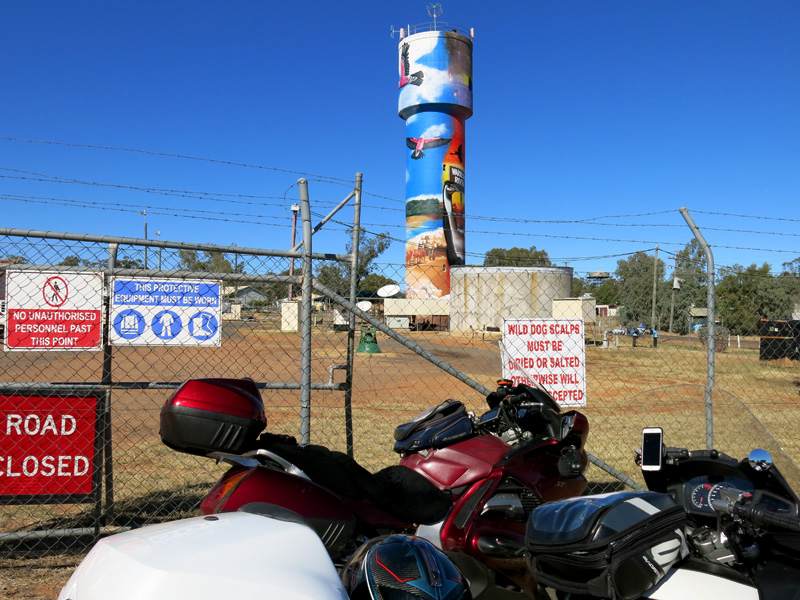 I really thought the era of bounty hunting had long gone, but it persists here. 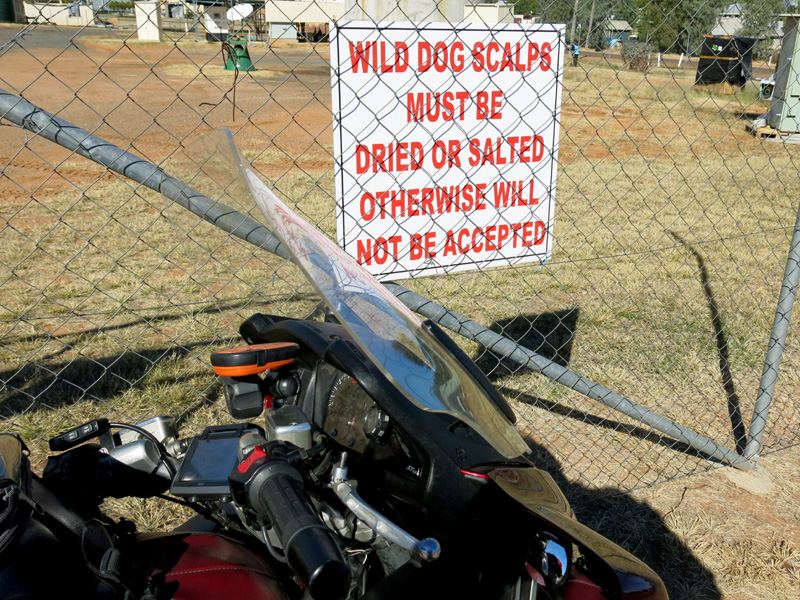 The last time I was here, the Warrego was a sandy bed with car tracks all along it. The rains over the past few months changed all that, but most of the water has gone downstream leaving a chain of ponds. 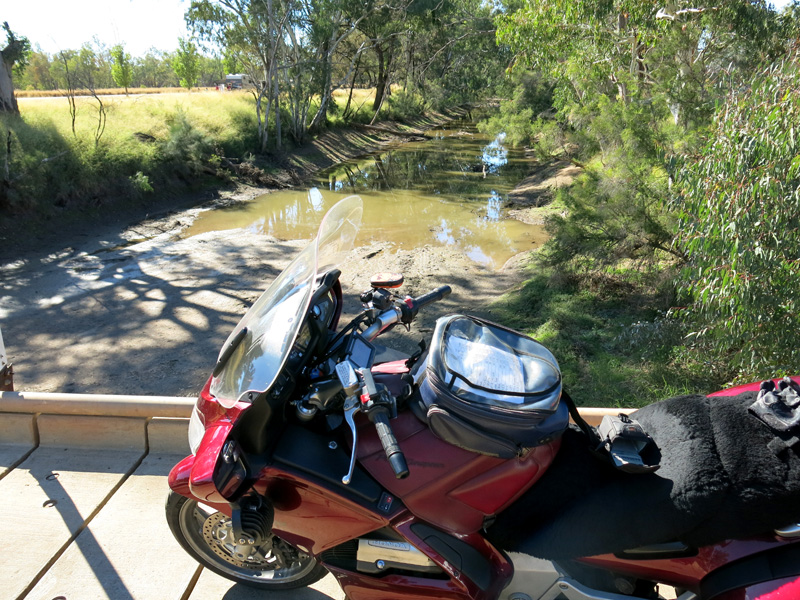 Every town is looking for some unique feature, and their claim to fame out here is the vicious meat ant. There is a display nearby declaring a carcass thrown on a meat ant bed will be stripped to the bone in days. I believe it's by sheer force of numbers and voracious appetites rather than size, but I'm not going exploring to find out. 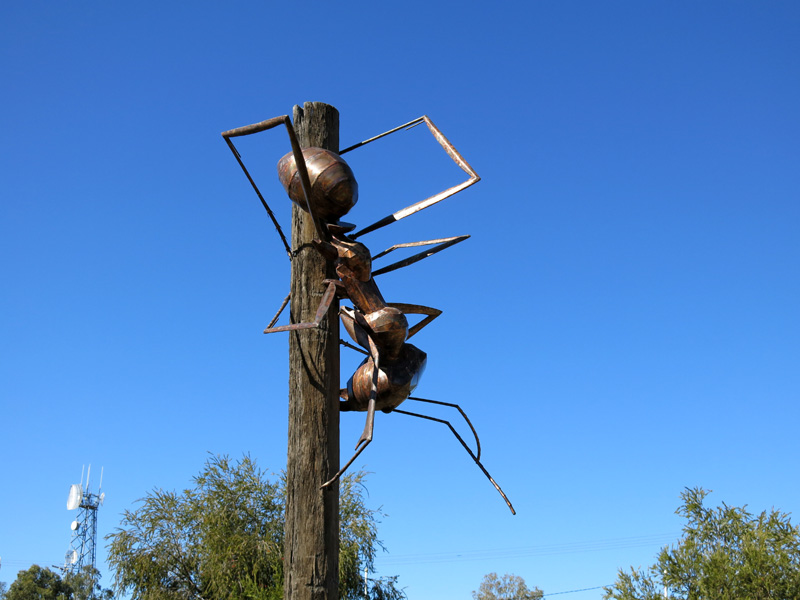 The other notable thing that Augathella can claim is being the town the "Smiley" movies were made in. The one I recall seeing was "Smiley Gets a Gun" in 1958. OK, stop your sniggering in the peanut gallery- we had colour movies back then! The kiddies here won't have heard of Dame Sybil Thorndike and Chips Rafferty but they were stars in their day. 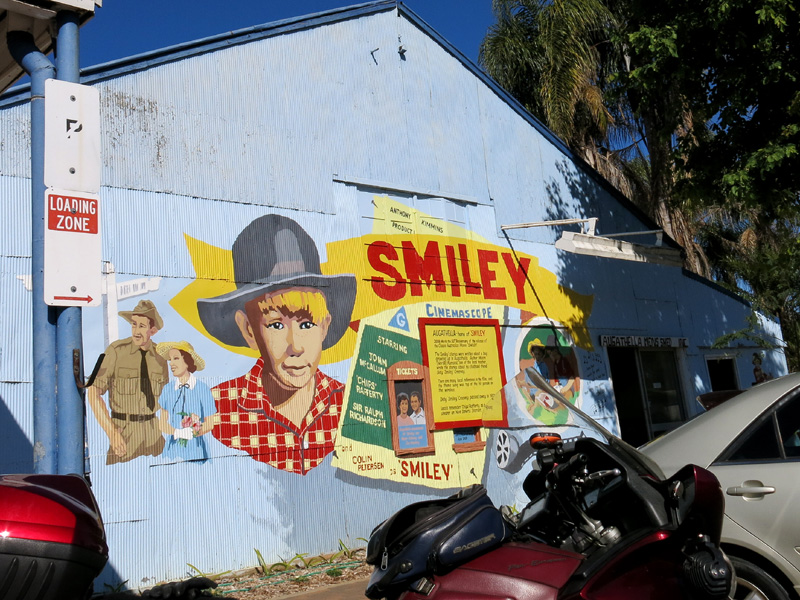 Some artist thought it a good idea to help the illiterate identify their appropriate loo. 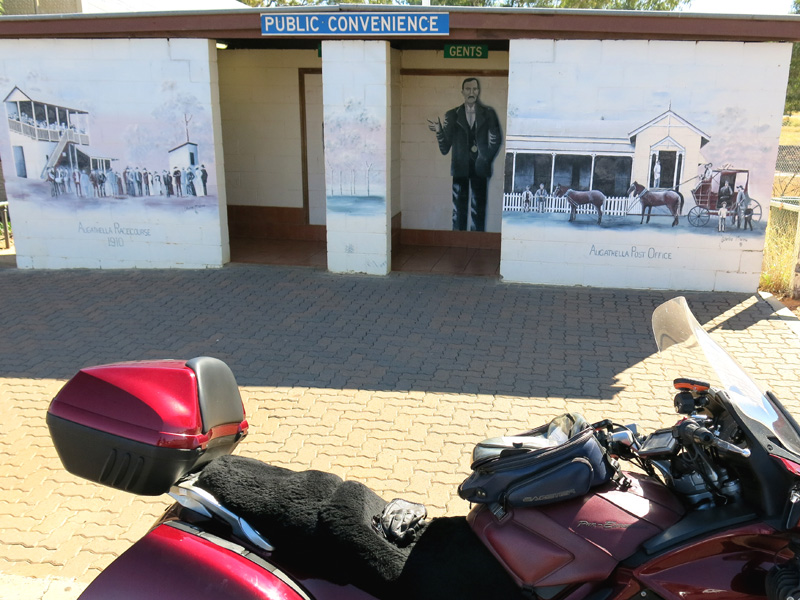 Anyway, I probably lost half my readers back at the servo in Brisbane, so I'll wind up this saga. I'll spare you any sun photos- you've seen plenty. One sign that caught my attention was this, proclaiming the road transportation west of Roma was extraordinarily unreliable. 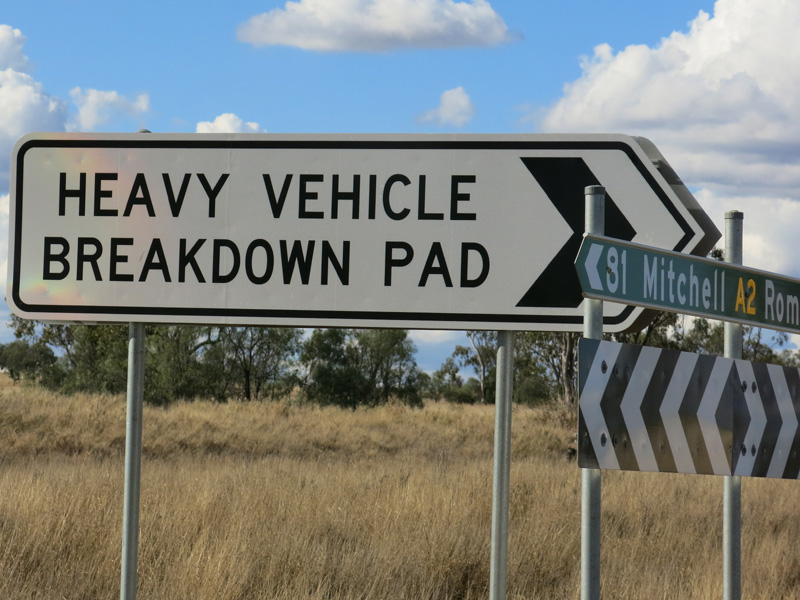 It turned out to be where the road trains park their excess trailers because they are limited to two, east of Roma- hence the "break down".

We arrived home 30 minutes later than the plan because we spoiled ourselves with a sitdown afternoon break in Roma.

Post Script- I have an email from the IBA assessors that the ride has been approved and entered in their database. Certificate still to come...

Premier Member
IBR Finisher
#3
Great report Biggles. I've passed through many of those places 'on the clock' but never snapped pics like those. Well done.

You, ACTCapo, KiwiMartin and not many more are keeping the Iron Butt wheels turning lately. Well done. Woof

As for the servo... I understand the various opinions of the helmet 'rules'. Its ironic that currently in NSW, perhaps hundreds of km from the Sydney Lockdown, you coulda/shoulda/woulda had to stop and PUT ON a face covering when getting fuel at a servo.

#4
As is said above, well done on completing your quest. Cheers.

Premier Member
#5
Must be nice up there this time of year Biggles , Congrats on getting the four of them.
Last edited: Jul 8, 2021

Premier Member
IBR Finisher
#6
Excellent ride repot Biggles, and you really dodged a Bullet not getting a fine at the start!
keep them wheels turning!

#7
OX-34 said:
You, ACTCapo, KiwiMartin and not many more are keeping the Iron Butt wheels turning lately. Well done. Woof

As for the servo... I understand the various opinions of the helmet 'rules'. Its ironic that currently in NSW, perhaps hundreds of km from the Sydney Lockdown, you coulda/shoulda/woulda had to stop and PUT ON a face covering when getting fuel at a servo.
Click to expand...
I’m probably going to have a crack at these equinox/solstice rides starting this coming spring. Having a set/immovable date certainly helps get me motivated.

As for the servos and helmets, I’ve been using either BP or Caltex/Ampol for petrol as I can pay using their apps on my phone; no need to go inside to pay. I’ve never been asked to remove my helmet to fill up; just lucky I guess.
Last edited: Jul 10, 2021

Premier Member
#9
Nice ride report, thanks for posting.
I really enjoyed it!

Premier Member
#10
Thanks for the report and photos Biggles. Always enjoy your reports.

Plus this to complete the set:

A nice looking set of certificates

Premier Member
#17
A very nice written summary of many, many hours astride a bike seat !

IBA Member
#18
Excellent report and a fine 'all year motorcyclist' achievement. I enjoy reading the IBA Australia ride reports, especially those with photos as its good to see the country where my grandchildren are being raised. Having read this

Biggles said:
Before going away for the weekend I had charged up and tested my heated gloves and vest, got out a pack of "Little Hotties" and ran the heated grips.
Click to expand...
I have to ask how cold was you expecting it to get?

Premier Member
#19
JohnR said:
I have to ask how cold was you expecting it to get?
Click to expand...
During the night at the higher altitudes in winter in the (northern) State, I've seen 2 degrees Celsius. It's not uncommon to see 4 degrees around dawn in winter even at modest altitudes out west. Those temps are pretty bearable, but at 100 kph the chill factor knocks 5 degrees off those figures so you can get pretty uncomfortable after a few hours. Add in some fog, wind, perhaps light drizzle and I'm glad of some heated clothing.